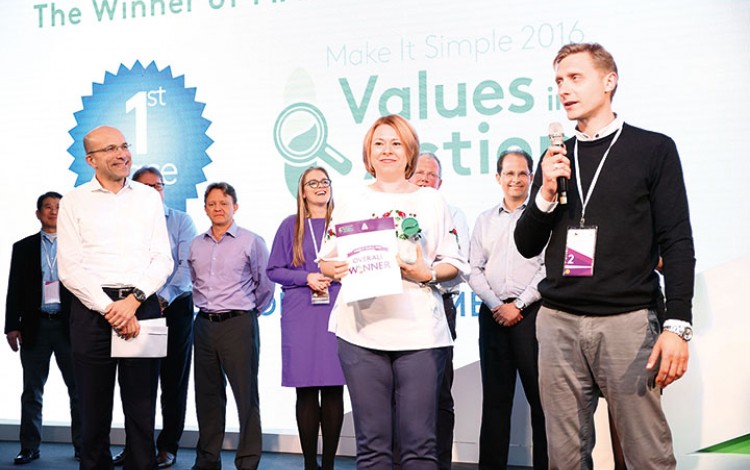 Ukraine’s burgeoning agriculture sector is fast emerging as the most important engine of the post-Euromaidan national economy. Growing yields and the country’s expanding export reach mean Ukraine’s farmers already account for a large slice of national foreign currency earnings. Consolidating the gains of the past few years will require the kind of long-term thinking across the industry that is often difficult in what remains primarily a spot market for agricultural commodities.

This transition towards a  forward market would help Ukraine’s agribusiness sector move to the next stage in its development, allowing for greater financial stability and more structured investment. Adama Ukraine, the Ukrainian branch of Israeli-based agribusiness multinational ADAMA, is among those working to promote elements of a forward market in the country.

The Adama Ukraine bid to introduce forward commodities contracts began with a pilot project in 2016 and has already received international recognition. Adama Ukraine won the multinational’s annual global “Make It Simple” corporate award earlier this year for its forward contracts initiative, beating out rival entries from over forty other Adama companies. This was the first time Adama Ukraine had entered the “Make It Simple” contest, making the company’s debut success even more gratifying.

“It was important for us to win something like this. The award represents international approval for our future strategy,” explains Adama Ukraine Managing Director and CEO Dmytro Kashpor. He argues that this kind of recognition also reflects growing awareness of Ukraine’s importance on global agricultural markets. “There is always an element of politics in such corporate contests. We have doubled our Ukrainian turnover in dollar terms since 2014, and this has put us on the map, earning Ukraine recognition as a key driver of the Adama North European cluster.”

Adama Ukraine’s recent ‘Make It Simple” victory was at least partly due to the novel presentation the company staged at the Adama General Assembly. Mr. Kashpor outlined the company’s forward contracts policy in a businesslike manner while Adama Ukraine CFO Nadia Utkina, dressed in a traditional Ukrainian vyshyvanka blouse, offered a more theatrical fairytale presentation of the business challenges facing Ukrainian farmers. This engaging performance won over assembled voters and jury members alike, but the substance of the initiative also caught the imagination.

Adama Ukraine’s forward contract policy, called a “Magic Option for Farmers”, allows Ukrainian agribusinesses to enter into an agreement with Adama Ukraine at the start of the agricultural season establishing a minimum commodity price, with the option of selling at this rate or not once crops have reached harvest. Mr. Kashpor likens the initiative to car insurance and calls it, “a security measure against bad times when commodity prices are down. It is a rainy day insurance policy.” He says the goal is to introduce elements of stability and predictability into the Ukrainian agribusiness sector, allowing Adama Ukraine’s customers to invest and broaden their operations. For Mr. Kashpor’s team, this means also expanding beyond the boundaries of Adama’s traditional focus on crop protection products. “We need to offer the kind of services that address the core concerns of our customers. If they are successful, we are successful,” says Mr. Kashpor. He believes providing the security of fixed commodity prices will open up a range of opportunities for deepening cooperation with existing clients, and is currently active in promoting the initiative throughout Ukraine via roundtables with the management of small and medium-sized agricultural enterprises.

Initial responses have been encouraging, with more than ten companies signing up for the 2016 pilot project involving forward contracts for corn. However, not every Ukrainian agribusiness executive recognizes the value of fixed commodities rates. Some would rather sit on their commodity supplies and wait for prices to rise, despite the missed opportunities and cost of money this would involve in terms of lost revenues and business dynamic. “It is not always easy to explain to customers exactly what this initiative offers and why it is beneficial,” says Mr. Kashpor. “The big holdings generally understand, but medium and small-sized farms do not always get it. We are now active in raising awareness around the country. We have set ourselves the task of moving from a spot market to a forward market. This is the route to a bright future for Ukrainian agriculture as a whole. As soon as you move from the spot market to the following crop market, you solve so many problems.”

From casino culture to predictability

Mr. Kashpor sees this transition to a forward market as a gateway to greater agribusiness stability and reliability – both key factors whose absence has acted as a barrier to Ukraine’s agricultural evolution. “We currently lose a lot due to the lack of stability on the Ukrainian agricultural market, which is still a spot market,” he argues. “It is basically a casino. You do not know what you are going to get for your crop, so you are effectively engaged in gambling. As a farmer, you should not have to gamble. You should be able to focus on doing what you do best – which is growing crops.”

Adama Ukraine’s efforts are part of the broader transition of the Ukrainian agribusiness towards best international practices as the industry seeks to carve out a larger share of global markets. “As you step into the Champions League you need to adopt a different attitude. You need greater reliability,” says Mr. Kashpor. “I think people have started to realize that cheating is simply too expensive, because it will ruin your reputation in a market where everybody knows everybody else. Instead, Ukrainian market participants are becoming more open to innovation and are building up trust in each other. On a fundamental level, this trust is the key difference between a spot market and a forward market. Without trust, the whole model is at risk. Once trust is established, the way is open to all sorts of innovation.”

Despite the recent progress made with initiatives like Adama Ukraine’s forward crop contracts, Mr. Kashpor continues to see land reform as the decisive issue for the medium-term development of the Ukrainian agricultural sector as a whole. “The big question now is when land reform will take place. That will be the trigger for massive growth in the agriculture market,” Mr. Kashpor predicts. He expects a hybrid model of land reform to be adopted later this year, keeping some restrictions in place while providing greater protection for investors.

Mr. Kashpor is convinced land reform will produce a major boom in the Ukrainian agribusiness sector that will have knock-on effects for the entire economy, unlocking investment and fostering long-term expansion. “There are currently plenty of gaps in Ukraine’s agricultural infrastructure. We can grow much more than we are doing now, but the infrastructure is not ready,” he says. “The railway network is a disaster. Warehousing is also an issue. Once the land issue is resolved, longer-term investment will support growth in the agriculture sector. This will bring other industries forward. The construction sector will become overloaded with orders from the agriculture industry for the next five to six years as companies invest in infrastructure improvements. There will also be significant benefits for metals, transportation, manufacturing and a range of other industries.”

This bullish outlook reflects the growing sentiment across the industry that Ukraine is finally beginning to occupy its rightful place on global agricultural markets. Mr. Kashpor regards this as a natural progression. “Ukraine is an agricultural nation and always has been,” he says. “We are now recovering from the short-termism of the post-Soviet period and are back among the global market leaders. There is definitely much more to come.”

About the interviewee: Dmytro Kashpor is the Managing Director and CEO of Adama Ukraine