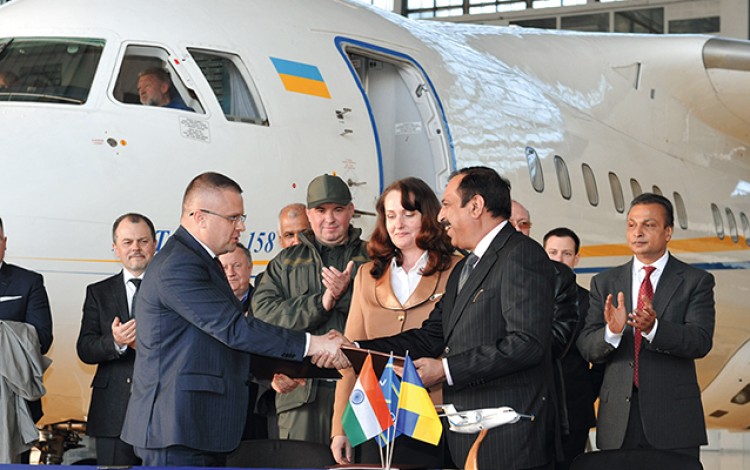 Ukraine’s flagship state-owned aerospace company Antonov signed a major memorandum with India’s Reliance Defence on 27 April, paving the way for joint production of Antonov aircraft and marking a significant strengthening of bilateral strategic ties between the two countries. The agreement covers both military and commercial transport aircraft, and will now see Antonov and Reliance Defence partnering to participate in a forthcoming tender for Hindustan Aeronautics Limited that could lead to orders for up to 200 aircraft and contracts totaling billions of US dollars. Officials from Reliance Defence, which is part of the Anil Ambani-led Reliance Group, confirmed that under the terms of the cooperation agreement, the two companies will collaborate on the assembly, manufacture, maintenance, repair and overhaul of Antonov aircraft for both Indian and global markets.

The agreement will be seen as a major international vote of confidence for Ukraine’s aerospace giant Antonov. With geopolitical tensions making continued close cooperation with Russia problematic, the state-owned Ukrainian company is eager to build on its existing global market reach. The partnership agreement with Reliance Defence provides the company with improved access to lucrative Indian markets by meeting the country’s ‘Made in India’ regulations governing local production. The agreement foresees the development and production of a new twin-engine turboprop transport aircraft based on Antonov designs and technologies. The Indian Air Force currently operates more than 100 Antonov An-32 aircraft. This existing Antonov fleet is nearing the end of its last upgrade cycle and will shortly be due for replacement.

Antonov First Vice President Oleksandr Kotsiuba told Business Ukraine magazine that the signing of the memorandum marked a new stage in the company’s cooperation with Indian partners. “We have vast experience of interaction with India in terms of aircraft delivery, operation, and cooperation with production enterprises. We welcome this new direction in Ukrainian-Indian aviation sphere collaboration.”

This Indian partnership agreement comes as Antonov continues to develop and market its latest transport model, the An-178, which was first unveiled in spring 2015 and is currently undergoing the certification process. The new An-178 is a next generation aircraft broadly based on Antonov’s An-148 and An-158 family of jets, the first of which debuted in 2004. It is designed as a direct upgrade to the previous generation of Antonov cargo carriers. The An-178 can carry cargos of up to 18 tonnes, allowing it to occupy a relatively empty niche in the air freight market between the smaller, short haul carriers and the really big boys of the industry. “We have already signed agreements on An-178 deliveries with Azerbaijian and China. In addition to these orders, the Kingdom of Saudi Arabia and India have expressed their intension to operate this model,” Kotsiuba confirms.

The memorandum between Antonov and Reliance Defence was one of a number of agreements inked in Kyiv during a high-level delegation visit to the Ukrainian capital in late April that highlighted the growing strategic ties between the two nations. In line with these agreements, Ukraine’s state-owned SpetsTechnoExport will now work together with Reliance Defence on the modernization of armoured vehicles for the Indian Army, while there will also be cooperation in the development of unmanned aerial drones and gas turbines for the Indian Navy programme. SpetsTechnoExport Director Pavlo Barbul told Business Ukraine magazine that the agreements are the result a three-month negotiation period and productive bilateral meetings held at the annual DefExpo international arms expo in New Delhi earlier this year. “For Ukraine, this agreement creates the ability to attract the resources, expertise, finance and facilities of the Republic of India. The overall aim is to unite our efforts in order to jointly create products for the Indian market.”