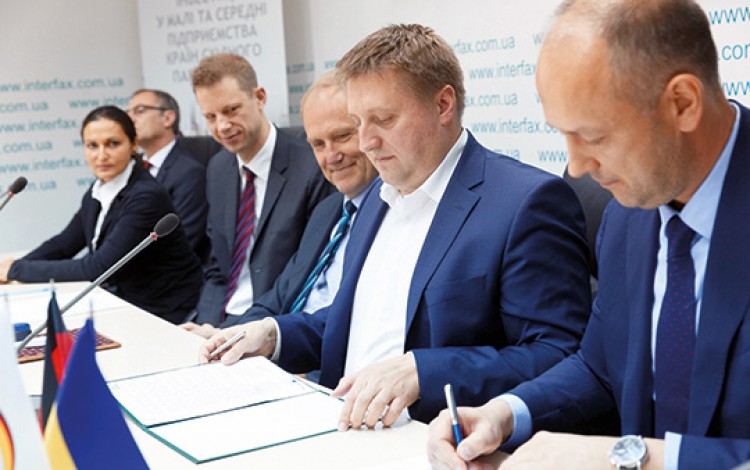 ProCredit General Manager in Ukraine Viktor Ponomorenko (center) and colleagues from GUF, the German Embassy and the EU during the signing ceremony
Business Ukraine magazine

The German-Ukrainian Fund (GUF) and ProCredit Bank signed a loan agreement 5 September for the financing of Ukrainian small and medium-sized enterprises (SMEs). The agreement falls within the framework of the SME Promotion Program funded by the German Government through KfW and in cooperation with the European Union’s EU4Business initiative. It provides lending for SMEs in the Ukrainian national currency at a rate of 15% per annum.

The agreement focuses on SME loans for the purchase or modernization of equipment, the reconstruction of premises, and the replenishment of working capital in order to expand existing production or make new production possible. This latest initiative is part of broader German efforts to support the development of the Ukrainian SME sector, which is widely regarded as a major driver of sustainable economic growth. Greater access to credit is a key part of this support for the SME sector.

Sebastian Knoke of the Germany Embassy in Kyiv commented on the new agreement: “The German government has been continuously supporting the German-Ukrainian Fund since 1996 by providing long-term loans and grants for technical assistance. This SME promotion program is one such loan. It makes EUR 10 million available to SMEs through Ukrainian banks. I am happy that ProCredit Bank has joined this program and will be able to on-lend funds to SMEs in the local currency and on very attractive terms.”

ProCredit Bank’s General Manager in Ukraine Vitkor Ponomorenko welcomed the bank’s role in the new initiative and said ProCredit’s strong loan portfolio growth in recent years served to highlight the need for such services within the Ukrainian SME sector. “There is definitely demand,” he commented. “This provides SMEs with access to a quality financial resource with loans in hryvnia.”

The SME lending program has a clear focus on the promotion of innovation. Industries identified as priorities include agriculture, processing, and electricity supplies. It is hoped that the program will help Ukrainian SMEs to make the most of the opportunities presented by the free trade component of the Ukraine-European Union Association Agreement, which came fully into force on 1 September 2017.