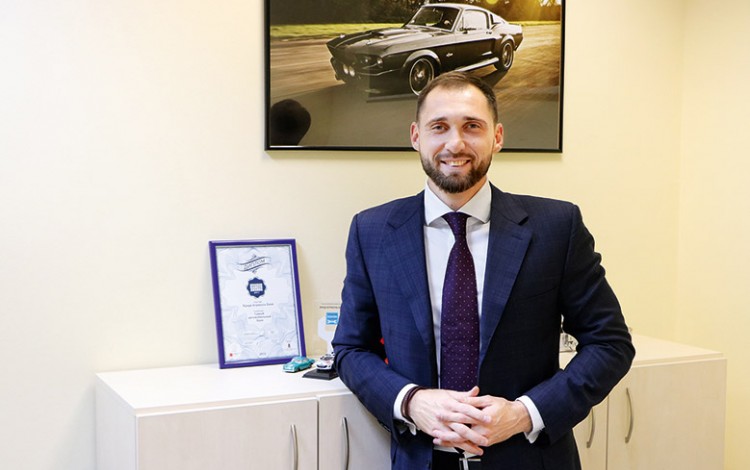 About the interviewee: Roman Bunich is the Director of the Alternative Channels and Third Party Sales Department at Credit Agricole Bank in Ukraine
Business Ukraine magazine

Robust growth in the auto sales market is widely seen as an indication of Ukraine’s economic recovery, and the country’s car loans segment is keeping pace with the positive dynamic. Sales figures for new cars in Ukraine have risen by over 30% so far in 2017, and car loans market leader Credit Agricole says they’ve experienced a similar expansion in their portfolio this year. However, the Director of car loans service at Credit Agricole Roman Bunich is cautious of talk about an auto industry boom. He regards current growth levels as sustainable but does not see economic evidence to suggest that accelerated progress is around the corner. “The current increases are stable and we’re seeing a very close correlation between the growth in sales and loans,” Mr. Bunich offers. “However, there is little reason to expect any sudden surges.”

By August 2017, Credit Agricole had dispersed UAH 1.2 billion in loans since the start of the year. That figure is almost equal to the annual sum of UAH 1.3 billion for 2016, raising the prospect of a yearly total closer to UAH 2 billion. Almost 50% of this portfolio is in the form of very low rate loans – a service Credit Agricole offers via partnerships with insurers and some Ukraine’s largest international auto importers. The bank has developed financing packages without any flexible interest rate clauses, providing customers with added peace of mind and a sense of predictability when taking out a car loan. “It has proved a popular and convenient option. We have customers who are already purchasing their fourth car via our very low rate loan program,” says Mr. Bunich.

The portion of overall new car sales in Ukraine covered by loans is currently around 12-15% of the market and has remained steady for the past few years. This relatively low figure reflects the economic uncertainties faced by many Ukrainians that prevent them from making significant medium-term financial commitments. It is all a far cry from the heady days of 2008 when Ukraine ranked among Europe’s top ten auto sales markets with approximately 600,000 purchases – of which around 50% were financed by loans. Then came the global credit crunch and a collapse in the Ukrainian auto market. Almost a decade later, the slow recovery is still underway.

Mr. Bunich first entered the auto financing sector of the Ukrainian banking industry in 2004 and joined Credit Agricole in 2007 to help oversee development of the bank’s car loan services. He witnessed the often somewhat lax attitudes towards car loan qualification in place at some banks during the years leading up to the 2008 crash, and recalls how people in low-paying employment were able to secure loans on the basis of their passport and taxpayer’s ID alone. “First there were lots of banks active in the market then there were virtually none. It was a bit of a jungle,” he offers. The market has matured considerably since then, with Credit Agricole securing international certification for its car loan financing services in 2011. It was the first and, to date, the only Ukrainian bank to do so.

Staying ahead in what is an expanding but relatively small and highly competitive car loans market requires constant service upgrades. Mr. Bunich points to Credit Agricole’s new multi-step rate, which allows for longer-term loans with very low rates in the first year and climbing gradually over an extended period if the client requires additional time to complete repayments. Other conveniences include an innovative automated application process that connects the bank to dealerships around the country, providing analytical oversight and reducing the potential for paperwork delays. “As a car loan granter, we are becoming more flexible and competing in terms of the services we provide,” he says. “We try to be faster and have also worked to simplify the documentation required when applying for financing. We are always fine tuning our services.”

With the loan financing market for new cars closely tied to the growth in overall Ukrainian sales, Mr. Bunich sees the used car sector as a particularly attractive option, but believes the expansion of this sector is currently being hampered by a lack of awareness among potential customers of the services that are already available. Credit Agricole offers used car loan services but last year only issued loans for 90 cars, a tiny return when compared to the loans for around 3,500 new cars the bank expects to issue this year. “I see huge potential in used car financing. The problem is that people simply do not know about these services,” he says. “We will continue to develop our loan services for the purchase of used cars. At the end of the day, we want to tailor our products to meet customer demand. Credit Agricole is a bank for car lovers, whether they are buying a new or used vehicle.”

The other niche attracting considerable industry attention is the electric car market. Sales growth figures continue to climb impressively in Ukraine, but the actual volumes involved remain relatively small. Mr. Bunich does not see this changing until the country has the necessary infrastructure to make large numbers of electric cars a realistic and convenient proposition. “Electric cars are the future. There is no doubt or debate about that. The question is when this future will arrive in Ukraine,” he says. “Everything depends on infrastructure. As a green bank, we already offer financing packages for electric cars, but Ukraine is not yet a comfortable place to drive an electric car. It will happen here, but it is unlikely to come soon.”