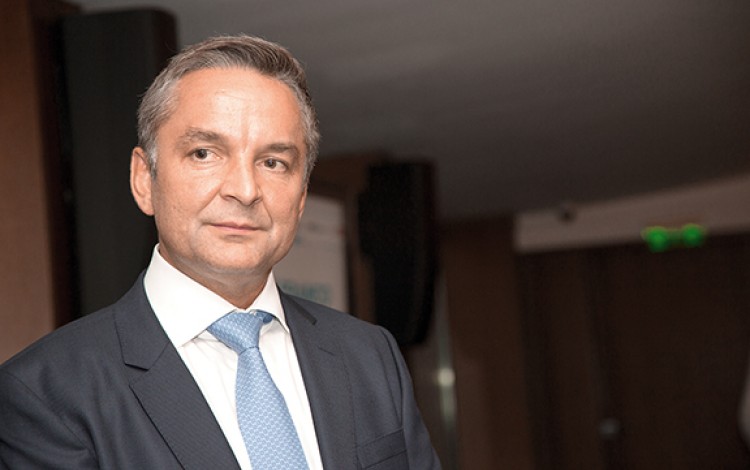 The Ukrainian business environment is currently going through one its most challenging phases since independence in 1991, but the message from the country’s French chamber of commerce is clear – the French business community is going nowhere. “None of our member companies have left. They are all still active in Ukraine,” comments Thomas Moreau, who has served as President of the Chambre de Commerce et d’Industrie Franco-Ukrainienne (CCIFU) for the past four years. He believes this staying power is down to a combination of faith in Ukraine’s future and the practicalities of existing investments already made into the economy of the country. “It would be stupid to leave now only to come back in five years’ time and start all over again,” he says. “French companies were originally attracted to Ukraine by the country’s vast potential. That potential remains.”

Paris native Moreau believes one of the keys to finally realizing Ukraine’s fabled potential lies in improving the country’s image and raising awareness internationally. He advocates the creation of representative trade missions in EU countries capable of promoting Ukrainian import and export opportunities among local business communities, and laments the low profile the country has long suffered from in France. “Ukraine was relatively unknown in France until recently, so the first time many people learned about the country was when it hit the headlines as a result of the Crimea crisis and the conflict in east Ukraine,” he says. “This has inevitably created a negative image and has served to put off potential new investors.”

Moreau sees a role for the CCIFU in countering these negative perceptions, especially in terms of the exaggerated security concerns that international media coverage of the current conflict has generated. “Security is not a concern for those of us working in Ukraine. We live our lives perfectly normally here in Kyiv, which is a very safe and comfortable city. This is the message we have to get to our French colleagues.”

One of Ukraine’s largest business communities

The CCIFU has been active in Ukraine for twenty years and currently boasts over 100 member companies, making it one of Ukraine’s largest national chambers of commerce. It originally started out as an essentially social organization bringing together members of the fledgling French business community in Ukraine in the 1990s for informal gatherings. It has subsequently evolved into a more traditional chamber of commerce with a range of committees and a public service ethos. Moreau says the membership is currently comprised of approximately 70% multinational companies and 30% entrepreneurs. While there are noticeably fewer expats on the ground, he is encouraged by the continued commitment to Ukraine he has witnessed among CCIFU companies.

French investment in independent Ukraine began in the early 1990s before enjoying a sharp spike in the boom years of the mid-2000s. Moreau says this dynamic period gave way to more long-term investment by French companies after 2010. He believes we are now on the cusp of a new phase in the development of the French business community in Ukraine, with many French head offices currently asking their Ukrainian representatives to explore the possibilities presented by the EU-Ukraine Association Agreement for manufacturing and exporting into the EU from Ukraine.

The fall of the Yanukovych government and the conflict in east Ukraine have presented international businesses in Ukraine with numerous immediate and pressing challenges. However, Moreau feels the future development of the French business community in Ukraine will ultimately depend on the country’s ability to pursue a comprehensive reform agenda capable of living up to the Euro-integration expectations underpinning the Euromaidan Revolution. “Investors want to see progress before they commit,” he comments.

Moreau is moderately upbeat about the steps taken so far, speaking enthusiastically about the progress made in the previously problematic sphere of VAT refunds. French businesses enjoy a prominent presence in Ukaine’s agriculture sector, and Moreau reports that CCIFU member companies have been broadly happy with the pace of the reform programme implemented by the country’s highly rated Agriculture Minister Oleksiy Pavlenko.

The most common concerns Moreau encounters among CCIFU members will be all-too-familiar to anyone with long-term experience of the Ukrainian business environment. He cites time-consuming bureaucracy, rule of law issues, and currency restrictions as among the key challenges facing French companies. Underpinning all these concerns is the central theme of stability. The current uncertainty over Ukraine’s future and the transitional nature of the country’s economy have created opportunities but also fueled the kind of ambiguity that scares many investors away. Moreau says greater clarity is required in order for existing French companies to expand and new market entrants to join them. “Uncertainty is a problem. We do not always know what to expect next and this makes planning difficult. Greater visibility would be a big plus,” he concludes.