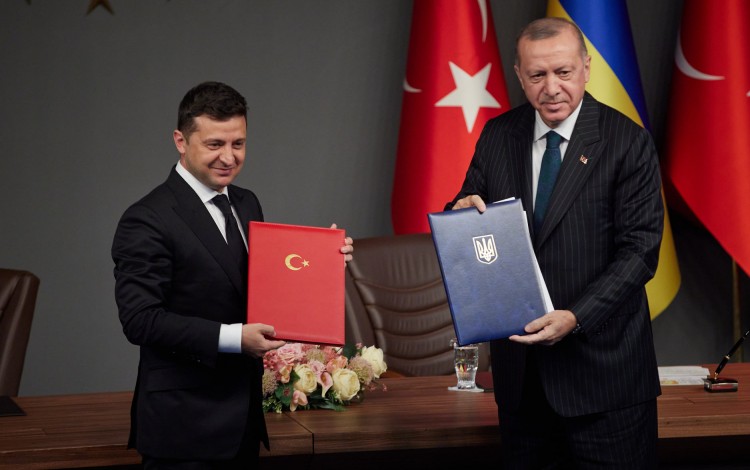 Turkey and Ukraine signed a series of cooperation agreements in the military sphere during Ukrainian President Volodymyr Zelenskyy’s 16 October visit to Ankara, underlining the strengthening ties between the Black Sea neighbors. The relationship between Ukraine and Turkey viewed in both Kyiv and Ankara as a important counterweight to Russian ambitions in the Black Sea region.

The agreements create a framework for deepening cooperation in a range of military areas. Turkey is believed to be particularly keen to benefit from Ukraine’s considerable aerospace know-how as Ankara looks to build on its strong position in the drone warfare sphere and develop a new generation of missiles and aircraft.

Joint projects currently under consideration include the development of aircraft and missile engines. There have also been preliminary discussions of the possible joint production of Ukraine’s Antonov transport planes. Meanwhile, Ukraine is also hoping to add to the six Bayraktar TB2 armed drones purchased from Turkey in 2019.

There is considerable scope for fruitful cooperation between Ukraine and Turkey. The two countries are do not clash on any major geopolitical issues, while trade is currently growing. It is hoped that a long-awaited free trade agreement can be concluded in 2021. Both presidents have stated that this free trade deal would allow bilateral trade to rise from the 2019 level of USD 5 billion to over USD 10 billion per year.

Since the onset of Russian aggression against Ukraine in 2014, Turkey has remained committed to Ukraine’s territorial integrity. Turkey is home to a large Crimean Tatar community and Ankara has repeatedly reaffirmed its opposition to the Russian occupation of Crimea.