CANADA IN UKRAINE: Meet the Canadian pharmaceutical company in Ukraine since 1991 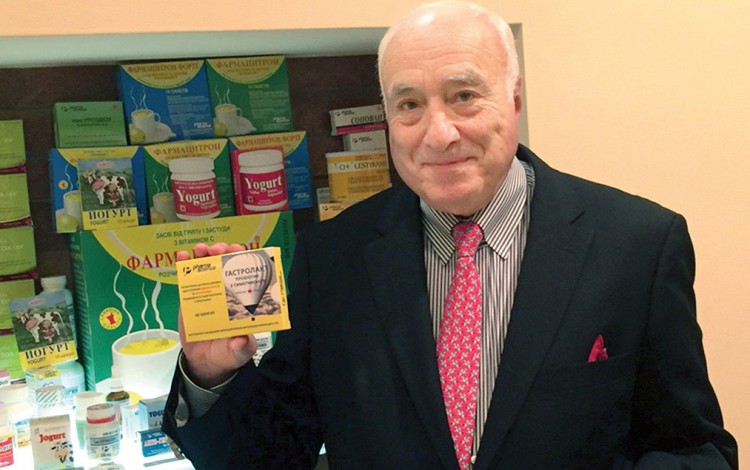 About the interviewee: Dr. Paul Melekhov is Vice President for Eastern Europe at Pharmascience

Pharmascience established its first presence in Ukraine in 1991 as part of its strategic international expansion. Business Ukraine magazine spoke to Dr. Paul Melekhov, Pharmascience Vice President, Eastern Europe, about the company’s experience of working in the challenging and rapidly developing Ukrainian pharmaceuticals market over the past quarter of a century.

You have been active in the Ukrainian pharmaceutical market since 1991. What were the most striking developments in the sector over the past quarter century?

After Ukraine obtained its independence in 1991, the country moved from a planned economy to a market economy and with this transition came growth in the pharmaceutical market.  Year after year, Ukrainians gained increased access to high-quality medicines as well as modern equipment and supplies. It was a turning point for the local pharmaceutical industry, which began to attract a number of pharmaceutical companies from around the globe. Recognising this opportunity, we are proud that Pharmascience was the first Canadian pharmaceutical company to do business in Ukraine and among the first worldwide.

Pharmascience was one of the first International companies to enter the Ukrainian market following independence. How did you arrive at the decision to begin operations in Ukraine?

The parents of our company founder, Morris Goodman, immigrated to Canada from Ukraine at the beginning of the last century. Not surprisingly, it was Mr. Goodman’s personal initiative that our company’s first international expansion should occur in Ukraine. Looking back at pre-independence history, we know that Ukraine was widely viewed as a “breadbasket” for pharmaceutical products within the former USSR. The raw materials for these products were generally manufactured in the other parts of the USSR, mostly in Russia, while Ukraine was the place where most of the finished products were produced. As a consequence of the dissolution of the USSR, the Ukrainian pharmaceutical industry was cut off from its traditional supplies of raw materials. Seizing on this opportunity, Pharmascience expanded in Ukraine with the goal of locally producing much-needed medication using high-quality Canadian standard raw materials. This marked the first successful project of Pharmascience in Eastern Europe. Our products were in high demand not only in Ukraine, but in the neighboring countries as well. We began exporting our products to Russia, Belarus and Moldova. By the end of 1995, we were manufacturing almost 10 different pharmaceutical products in Ukraine of high Canadian quality and at very competitive prices. Thanks to growing and profitable operations, Pharmascience’s first Eastern European office was established in Kyiv in 1994, thus creating Pharmascience Ukraine Inc. As the business environment in Ukraine evolved, we gradually switched from manufacturing in Ukraine to exporting products manufactured at our Montreal plant direct to Eastern Europe.

You currently import pharmaceutical products produced in Canada and do secondary packaging in Lithuania. What factors could persuade you to consider switching to local Ukrainian production?

Our decision to perform secondary packaging of some of our products in Lithuania and then to export into Ukraine and elsewhere in Eastern Europe was something we did not take lightly. Our decision was heavily based on the business environment in Ukraine at that time. Returning production, including the full production cycle, to Ukraine will depend on the successful implementation of long-awaited promises of reform. We are encouraged to see that some of these reforms have already started and we fully support this process. We are hopeful that additional reforms will soon follow and create the right business environment for us to consider resuming local production.

With each passing year, Pharmascience products become increasingly popular among both doctors and patients in Ukraine. The most commonly used products are Pharmacitron (cold and flu remedy), probiotic yogurt capsules, Dentol (teething pain gel), Ugresol (anti-acne lotion), motion sickness tablets, as well as the Happy-Baby pediatric line. In addition, Pharmascience supplies cancer treatment medications, as well as medicines for psychiatric, neurologic, gastroenterologic and many other disorders.

The health industry is often cited as one of the most corrupt in Ukraine. Do you see any progress in efforts to reform the industry and reduce corruption?

As per Transparency International, Ukraine continues to face challenges from corruption. We fully support the government’s efforts to implement the necessary reforms that will ultimately benefit the Ukrainian population and provide them with better access to medication.

Many of your staff has been with Pharmascience for over 20 years. How important is this employee loyalty for your business model?

Our team in Ukraine consists of approximately 100 industry professionals including pharmacists, medical doctors, nurses, economists and people with a diverse range of educational backgrounds. They are active in their roles in Kyiv and in all the major cities and provinces of Ukraine. Many of them have been part of the Pharmascience family for 10-15 years - a few of them have been with the company for more than 20 years. Pharmascience is an important chapter of their lives and we are very proud of our employees’ loyalty to our organisation. Our employees are inspired by our creativity, innovation and by our flexibility and dedication to our customers. They are proud of the quality of our products and see how highly regarded we are among patients and health care practitioners.

What impact has the devaluation of the hryvnia had on your business?

The devaluation of the hryvnia has had a strong impact on exports to Ukraine. Due to the current political and economic situation, it has become increasingly difficult for the general population of Ukraine to afford the high-quality medications and treatments they require. We have seen similar situations of economic crisis over the past 25 years of our activities in Ukraine, but we anticipate an improvement in the coming two to three years.

Your imports to Ukraine already represent a significant portion of Canada’s total trade with the country. Do you anticipate any significant developments as a result of the recently signed free trade agreement?

The Free Trade Agreement between Canada and Ukraine is an opportunity to bolster both our economies. While we do not currently anticipate that this agreement will significantly impact the pharmaceutical industry, we will wait to see how things unfold.

Until the market instability of the past two years, Pharmascience had experienced consistent growth in Ukraine for two decades. How do you see the pharmaceutical market developing over the next few years?

In my opinion, the situation may begin to improve within the next 10-12 months. We are already seeing initial signs of stabilisation. I anticipate that in two to three years from now, if certain conditions materialise, the pharmaceutical market may bounce back to its previous state. For Pharmascience, Ukraine plays an important role in our diversified international strategy. Our CEO, Dr. David Goodman, is very involved with our activities in Ukraine and visits the country almost every year, further advancing the development of our business. A strong domestic Ukrainian market will allow us to invest more into our presence here and our export activites to neighbouring countries.