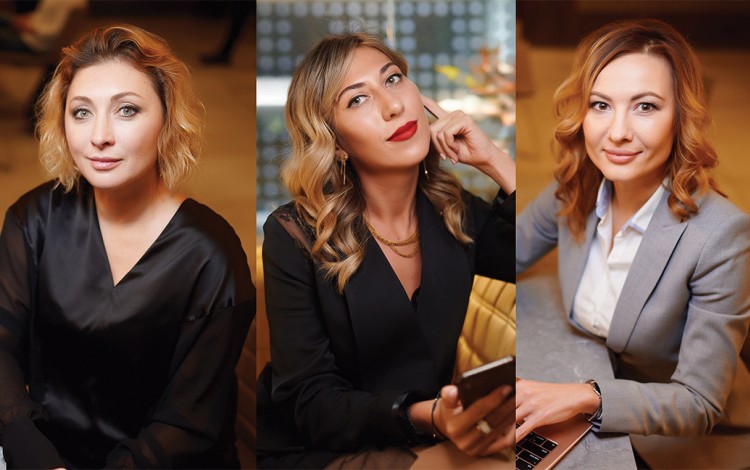 About the interviewees (left to right): Viktoriya Tigipko is the founder of WTECH. Veroslava Novosilnaya is the CEO and co-founder of WTECH. Valerie Kuzmenko is an ambassador for WTECH.
Business Ukraine magazine

Ukraine’s IT industry has grown at such a remarkable rate over the past decade that there are now very real concerns over the country’s ability to provide enough professionals in order to meet the apparently insatiable international appetite for Ukrainian IT services. With annual industry expansion running at around 20%, many fear that sooner rather than later there will simply not be enough qualified candidates to fill all the new positions created by soaring demand.

For many, the solution to this problem is more training. But while Ukrainian educational institutions and tech companies alike are busy launching new teaching programs and training initiatives, a more obvious solution might be to get greater numbers of women involved in the industry. IT is one of the most male-dominated professions in today’s Ukraine, with between 80% and 90% of all the country’s IT professionals currently men. This reflects global tech industry trends, but it also presents a roadmap towards long-term sustainability in a sector that is increasingly fuelling Ukraine’s wider economic growth.

Encouraging more women to enter the tech industry could help Ukraine overcome its mounting IT employee supply issues and provide the human resources necessary to continue the sector’s stellar growth. Experience elsewhere also strongly indicates that companies tend to perform better once they confront and address issues of gender imbalance. More women in management positions often leads to better performance and higher profits. This lesson is relevant across the Ukrainian business landscape, but few sectors could benefit as much as the IT industry from attempts to attract more female entrepreneurs and employees.

Awareness of the need to bridge the gender imbalance in the Ukrainian IT sector appears to be growing. One pioneering initiative in this direction is the WTECH community, which brings together Ukrainian women working throughout the IT and tech sectors to share their professional experience, seek mentoring support, and gain access to the best business practices. WTECH is the brainchild of co-founders Viktoriya Tigipko and Veroslava Novosilnaya. They hope the community can help raise the profile of women within the Ukrainian IT industry while leading by example and encouraging more ladies to explore career opportunities in a segment of the economy that remains shrouded in stereotypes of male domination.

“I think that the WTECH community appeared in Ukraine right on time,” offers Viktoriya Tigipko. “It is a unique community with a range of very specific goals including networking, career development, communication with potential investors, and business growth. At the end of the day, it is no secret that good advice is worth more than money.”

Tigipko believes the WTECH community is more valuable than the sum of its parts. She argues that a strong sense of solidarity between members can help create important support networks. “Our community offers genuine help when it comes to building up businesses in the Ukrainian tech sector, whether the task is finding the right employee or entering new international markets. We have advisors who are ready to invest their time on specific challenges, whether this involves taking a call or meeting for a coffee. Ultimately, we want WTECH to be a place where members can engage with leading entrepreneurs and opinion shapers in the Ukrainian tech sector while sharing ideas with their peers.”

Fellow founder Veroslava Novosilnaya believes WTECH can help counter stereotypes about women working in the IT industry. She acknowledges that such thinking is not limited to men only, and hopes that by bringing together many of the most successful women currently working in the sector, the initiative can help to dispel the nagging doubts that prevent some females from pursuing a career in the tech world. “I am often asked whether there are still any signs of overt gender discrimination among tech sector business partners, or stereotypical thinking about women in IT,” she says. “Obviously, nobody would openly question women’s tech abilities to their face anymore, but a certain bias on the part of many men still exists. However, the upsetting reality is that we women also tend to underestimate ourselves. We are susceptible to self-doubt and the fear being too pushy or persistent. It may seem surprising, but the biggest barriers to a greater role for women in the tech sector may actually be internal issues we have yet to deal with ourselves.”

Novosilnaya explains that these internal issues can sometimes extend to what she terms as “imposter syndrome” or a feeling among some women that they somehow do not fully belong in the tech sector. “When we conducted research, we found that 70% of surveyed women experienced such feelings,” she says. “This is often due to a lack of self-confidence stemming from the absence of family support, which more than 80% of respondents considered a crucial factor in career development. It seems that certain gender biases remain deeply engrained in Ukrainian society regarding traditional female roles as wives and mothers. This encourages many women to suppress the urge to build a successful IT career.”

For those who do opt for a career in IT, the relative lack of high-profile and successful Ukrainian women in the industry can also be an obstacle. “The women currently occupying leadership roles in the Ukrainian IT sector are genuine pioneers,” says Novosilnaya. “A majority of them have had no role models to look to for inspiration throughout their careers, which can lead to a sense of isolation. We hope WTECH can now provide the next generation of female IT professionals with the role models their predecessors lacked.”

This need for mentoring and guidance extends beyond abstract inspiration to the practicalities of getting ahead in the fast-evolving business environment of the Ukrainian tech sector. WTECH Ambassador of Sales in IT and Tech Valerie Kuzmenko says the community aims to help members by providing access to the expertise they require in order to advance their careers and make the most of the opportunities around them. “The majority of company founders in the IT sector are young people who have brilliant ideas and have created winning technologies,” she says. “In order to deliver their product to the right end customers, they require specialized business knowledge and the skills to grow on the market. This makes it particularly important for WTECH to attract experts who can help women at an early stage in their tech careers to choose the right kind of scalable business model, identify business opportunities, and establish themselves professionally. By bringing together women who have made a success of their businesses in a sphere that is still seen by many as a “man’s world”, we hope WTECH can serve as a bridge to a future where more women pursue careers in IT and the gender imbalance in the tech sector is a thing of the past.”