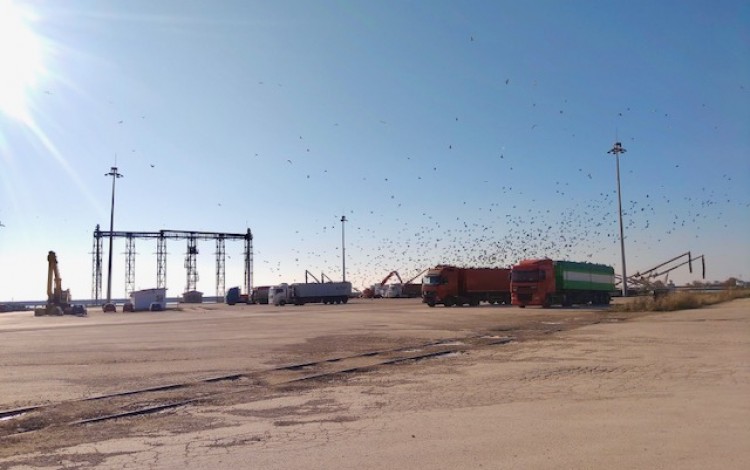 The Russian naval blockade of Ukraine’s Black Sea ports is plunging the Ukrainian economy into crisis while threatening to spark famine in countries throughout the developing world which rely on Ukrainian agricultural exports for their food security.

Diplomatic negotiations are currently underway to ease the blockade and allow exports to resume. However, many analysts believe the Kremlin has no intention of relaxing its stranglehold on the Ukrainian economy and is merely using talks to deflect blame for the mounting global food crisis.

Ukrainian officials continue to seek replacement routes that would allow the country to export at least a portion of the agricultural produce that is traditionally shipped via Black Sea ports. These efforts have so far focused on overland routes and the Ukrainian ports of the Danube River along with Black Sea ports in neighboring Romania.

The Greek port of Alexandroupolis on the Aegean Sea represents a potentially attractive alternative option for Ukraine. The port would enable exporters to avoid the high war risk insurance premiums of the Black Sea region and bypass the bottlenecks in the Bosphorous, making it arguably the safest and most cost-effective route in the region. With good access to Mediterranean and Middle Eastern markets, it is also a geographically appealing departure point.

In order to make the most of the port, infrastructure upgrades would be necessary. This issue is currently being discussed by Greek, EU and Ukrainian officials. Alexandroupolis already plays a significant role in the delivery of American military aid to Ukraine, so it is reasonable to expect widespread support for infrastructure improvements that would also make the transit of exports from Ukraine easier. Alexandroupolis port chairman Konstantinos Chatzimichail recently confirmed that conversations are ongoing to designate the port as a terminal for Ukrainian agricultural exports.

These efforts look set to face opposition from Russia’s allies in Greece. Prominent members of the Greek business community with longstanding ties to Russia are currently seeking to win the tender for a controlling stake in Alexandroupolis Port. Russia has voiced its dissatisfaction over the role of Greek ports in efforts to arm Ukraine, while Moscow is no doubt equally keen to prevent Greece from providing the means to bypass the Russian Black Sea blockade.