CUCC: Building business bridges between Canada and Ukraine for a quarter of a century 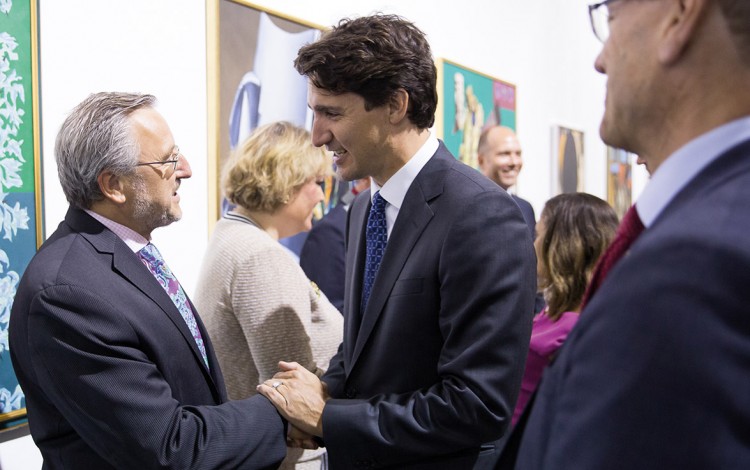 The recent Canada Ukraine Business Forum in Toronto was a landmark event in the developing commercial relationship between Ukraine and Canada. The forum was attended by more than 150 Ukrainian companies and 230 Canadian companies along with a host of senior government officials from both sides, making it one of the largest international forums of its kind in Ukrainian history.

The forum was organized by Global Affairs of Canada, the Ministry of Economic Development and Trade of Ukraine, the Conference Board of Canada, and the Canada-Ukraine Chamber of Commerce (CUCC). The role of the CUCC was in keeping with its longstanding activities as a gateway for greater Canadian-Ukrainian commercial ties. The CUCC story dates back to the early years of Ukrainian independence, and can even be traced to the twilight years of the Soviet Union. In the late 1980s, Soviet leader Mikhail Gorbachev invited a Canadian delegation to visit what was then Soviet Ukraine as part of his Perestroika initiative to open up the Soviet Union to the outside world. Toronto businessman and community activist Bohdan Onyshchuk, who would go on to become the first President of the CUCC, was part of the Canadian delegation during this ground-breaking 1989 visit. He was accompanied by Canadian government officials and 70 business representatives from a variety of sectors.

As a Soviet republic, Ukraine was not able to independently enter into any bilateral agreements with a foreign state, but the visit concluded with the signing of a cooperation agreement between Soviet Ukraine and the Canadian province of Ontario. This Soviet era agreement was to become the first step towards modern bilateral commercial ties. Within two years, the Soviet Union had collapsed. Perhaps predictably, Canada was the first country to recognize Ukrainian independence. Within months, a group of prominent Canadian businessmen with Ukrainian roots had come together to establish an umbrella business organization to help support bilateral ties. In 1992, the CUCC was formally incorporated in Toronto.

The initial membership of the CUCC was around 40 Canadian companies. The chamber’s membership has since expanded to include over 200 companies based in both Canada and Ukraine. However, this growth has been coupled with problematic periods that reflect the challenging and turbulent business climate in post-Soviet Ukraine. By the turn of the millennium, the initial enthusiasm of the early 1990s had become overshadowed by disillusionment over chronic corruption and the lack of a functioning judiciary, with numerous Canadian-owned companies falling victim to so-called raider takeovers. Many chose to exit the market.

The 2004 Orange Revolution served to reenergize the Canadian interest in Ukraine, leading to the return of the CUCC in 2005 under the leadership of new Chamber President Zenon Potoczny. “Our twenty-fifth anniversary is a testament to the lasting relationship between our two nations and the ability to overcome various obstacles. CUCC is the largest trade association for Canadian and Ukrainian business relations and will continute to engage and connect businesses throughout Canada and Ukraine,” says CUCC President Potoczny. “For over 20 years, CUCC has been a vigorous advocate of the business community ensuring that private sector positions and needs are considered during the development of policies that will impact future Canadian business and Canadian-Ukrainian relations. The recently signed Canada Ukraine Free Trade Agreement will create additional jobs for citizens in both countries and lay new foundations for trade, growth, and investment. It also sends a very powerful message to the rest of the world that Ukraine is open for business, and Canada again lends a supportive hand to Ukraine.”

The CUCC Ukrainian office was opened in Kyiv in 2009 by CUCC VP for Ukraine Roman Sawycky and CUCC Managing Director for Ukraine Emma Turos. “During the Yanukovych era, interest from the Ukrainian side in closer commercial ties with Canada was modest – especially from state officials. However, the efforts of individual members of the Canadian and Ukrainian business communities allowed us to develop momentum with a series of events including a successful 2010 event in Edmonton and a 2012 forum in Toronto to mark the CUCC twentieth anniversary,” says Turos.

The activities of the CUCC received a fresh impetus following the Euromaidan Revolution in Ukraine. The CUCC office was actually located close to the epicenter of the protests in downtown Kyiv, providing the CUCC team with an often nerve-wracking close-up view of the violent clashes that rocked the Ukrainian capital during the early weeks of 2014. As the post-Maidan era dawned, the CUCC was involved in developing a new Canadian government-led initiative to boost bilateral trade.

The Canada-Ukraine Trade and Investment Support Project (CUTIS) is a five-year development assistance project funded by the Government of Canada through Global Affairs Canada, and implemented by the Conference Board of Canada and the CUCC in partnership with the Ministry of Economic Development and Trade of Ukraine. It is scheduled to run until 2021 and will be a key focus for efforts to build on the recent Canada Ukraine Business Forum in Toronto and the subsequent signing of a bilateral free trade agreement during the early July visit to Ukraine of Canadian Prime Minister Justin Trudeau.

The CUTIS project aims to reduce poverty and increase sustainable economic growth in Ukraine through the expansion of Ukrainian exports to Canada and the encouragement of Canadian investment in Ukraine. In order to maximize the poverty reduction impact of increased trade and investment between Canada and Ukraine, the project will focus on supporting Ukrainian small and medium-sized enterprises (SMEs), including SMEs owned or operated by women. By the end of 2016, the Conference Board of Canada and project partners will complete analysis of the Canadian market for Ukrainian exporters and define five priority industries. The next steps will involve engaging Ukrainian producers and offering a range of support including training, certification, partner identification and participation in industry events.

The CUCC sees initiatives like CUTIS as important steps in the process of capitalizing on the strong emotional ties binding Canada and Ukraine in order to develop a pragmatic and mutually beneficial bilateral business relationship. “It is now time to act and to move the relationship forward. Within the framework of the already well-established relationship between Canada and Ukraine, entrepreneurs already have a variety of tools available that eliminate the need ‘to break the ice’ and allow them to jumpstart cross-border business collaboration,” says CUCC Board Member Yuriy Kryvosheya. “By adopting a proactive approach, members of business communities in both countries have the chance to build not merely their own competitive advantage, but to become a source of much needed development impact. Eventually, successfully realized cross-border projects will create additional jobs, facilitate know-how exchange and plant seeds for further fundamental growth. “

About the authors: Zenon Potoczny is the President of the CUCC. Yuriy Kryvosheya is a member of the CUCC Board. Emma Turos is CUCC Managing Director for Ukraine. They can be contacted via: This email address is being protected from spambots. You need JavaScript enabled to view it. or +38-044-4954551