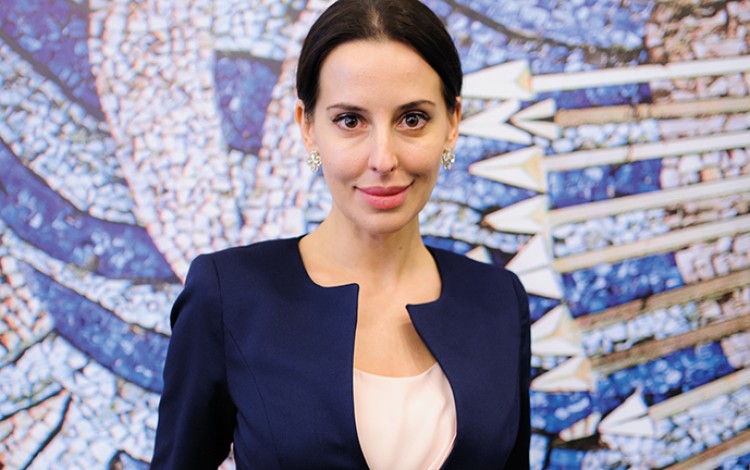 About the interviewee: Jaanika Merilo is Lviv’s Chief Innovation Officer and the Executive Director of the Ukrainan Venture Capital and Private Equity Association
Business Ukraine magazine

As Ukraine seeks to break away from the dysfunctional post-Soviet era and integrate into the European community, digital technologies are increasingly being viewed as a fast track to modernization. Many in the reformist camp regard the introduction of e-Government initiatives as a way of improving the Ukrainian economy and reducing the culture of corruption that prevents the nation’s development.

A range of e-Government initiatives are already being launched and implemented throughout Ukrainian state structures. The flagship project, the ProZorro digital government procurement system, has been widely hailed as the most successful reform of the post-Maidan period. ProZorro has grabbed the headlines, but it is by no means an isolated example. Many of the key anti-corruption initiatives have strong and open data dimensions.

Estonian-born financial sector and IT specialist Jaanika Merilo has been at the forefront of Ukraine’s efforts to embrace the digital revolution. Currently based on Lviv where she serves as the city’s Chief Innovation Officer, Merilo believes e-Government can play a key role in Ukraine’s transformation into a competitive economy and modern European society. She spoke to Business Ukraine magazine about the role of digital technologies in improving standards of living, reducing bureaucracy and cutting down on opportunities for corruption.

What first drew you towards Ukraine?

My father is Ukrainian so all of my life I have had a connection to Ukraine. I grew up with three mother tongues: Ukrainan, Estonian and Russian. I communicated with my mother exclusively in Estonian. She spoke with my father in Russian, while my father and I would only speak Ukrainian to each other. In 2007, I started managing a private equity fund with assets of USD 350 million focused on investing in the Baltics, Russia and Ukraine. Since then I have been visiting Ukraine regularly in connection with my work. I have travelled to all the major cities of Ukraine. I am now assisting the shift towards e-government in six cities including Dnipropetrovsk, Mykolaiv, Kharkiv and Lviv, where I am currently based.

You have an international education and professional experience in a number of Western countries - what attracts you to work in Ukraine?

You don’t get many opportunities in life to really make an impact. My roots are in IT and I think all of us want to put technology to greater use for the benefit of society. We want to solve fundamental problems and improve life. Now is my personal ‘window of opportunity’ to drive certain changes in what I regard as one of my home countries.

You have been intricately involved in the promotion of electronic government in Ukraine at both the national and regional levels. What do you see as the role of this ‘digital revolution’ in the broader Ukrainian reform process?

I believe reforming a country is not possible without changing the system. E-Government provides the tools for automation systems, making them more efficient and transparent. It also helps fight corruption. When you automatize the process and cut down the participation of civil servants, the possibilities for corruption gradually disappear. This fundamentally alters the approach to government-citizen interactions and leads to increasing levels of trust.

The role of what the media calls ‘The Digital Revolution’ is to minimize interaction and the impact of the human factor, or civil servants, in order to make all interactions and government services faster, more transparent, and more efficient. For example, according to some estimates, Estonia saved 2% of GDP thanks to increasing efficiency from the implementation of digital signatures alone.

Some sections of the international financial media have dubbed you ‘the angel of the Ukrainian economy’. Does this high profile aid or hinder you in your work?

(Laughs) As far as I am concerned, it is still just me and I cannot see myself differently. But seriously, I would like to think there is more attention being given now to the digital movement and e-Government. Any additional attention can help to make sure people treat the issue of e-Government more seriously. It means I have more tools at my disposal to demand change and to implement changes. It becomes harder to ignore the issue.

As Chief Innovation Officer for Lviv, you work closely with the City Administration. How does this experience compare with your time as an adviser to central government at the Ukrainian Ministry of Economic Development in Kyiv?

I am not only working closely with the Lviv City Administration, I am practically part of it. I am truly grateful to Lviv Mayor Andriy Sadoviy who, after I had served for period as an advisor, asked me if I wanted to become more involved in practical execution. I hope to be able to justify that trust. I think Lviv is not a typical city administration - many of my colleagues are under 30 years old and are eager to implement genuine change. We focus on solving problems and try not to fight within our own organization. This helps us from becoming engaged in confrontations with ‘the old guard’ who resist change. Lviv is truly the Ukrainian capital of innovation with the most efficient city mayor. It is a place where everything is geared towards results not processes.

What lessons can Ukraine learn from the experiences of other former Soviet countries - particularly your native Estonia - in the implementation of electronic government and other innovative approaches to business administration?

Estonia actually invented the entire concept of e-Government. It decided straight away not to implement old legacy systems and solutions, but to approach the post-Soviet reform process differently and to implement the ‘ideal model’. Many e-Government concepts were invented in Estonia, including everything from X-road to e-elections.

At this point, Ukraine can simply copy-paste many solutions and approaches. Lviv has successfully piloted the implementation of a range of solutions by copying existing models like BankID, MobileID, ID-cards and computer literacy programs with the help of the Estonian government.

Legislation should now be simplified and European standards need to be quickly adopted. The Ukrainian government should make clear decision to implement reforms. Estonia is a good example of what can be achieved when a government has a clear strategy and goals, and if it acts in a united manner.

Which sectors of the Ukrainian economy do you think stand to benefit the most from the ‘digital revolution’?

There are definite benefits for government, citizens and business. The process of simplifying everyday life by speeding up and automatizing processes will have a fundamental impact on all sectors of society. In Estonia, you can establish a company in 20 minutes, file your tax declaration in three minutes, and sign any document with your mobile device or ID card in one minute.

Many analysts see Lviv as the city with the most to gain from the EU-Ukraine Association Agreement, thanks to its close proximity to the EU and strong SME and IT sectors. Can Lviv serve as a model for the rest of Ukraine?

Lviv is already the most advanced city in Ukraine in terms of cooperation with European markets and financial institutions. The EBRD has its only regional Ukrainian office in Lviv, while the city is already working with a range of different international financial institutions. In this sense, Lviv is a genuine role model, but we cannot simply repeat the ‘Lviv formula’ in every other Ukrainian city due to local factors. Geographical location also has a major impact, especially for long-term investments.

Lviv is regarded as an unofficial capital of Ukraine’s booming IT sector. What needs to be done to foster further growth and protect the sector from undue pressures from state bodies?

I think it is very important to support and stimulate the creation of the right ecosystem. In this way, Estonia can again serve as a useful example. As the result of different government programs, 66% of startup entrepreneurs rate the support provided by the Estonian government positively. In Silicon Valley, the figure is 23%. Across the EU, only 20% in the startup sector are happy about government support efforts.

I think there are many things that the government, and in our case, the city authorities, can do. For example, we can encourage and develop communication and cooperation between universities, the startup community and IT clusters in order to pilot interesting projects that could turn into local or global business success stories. The city can also create a positive atmosphere by preventing unlawful raids or intrusion by government agencies. No unlawful actions against IT companies took place last year in Lviv, but six IT companies in Kharkiv reported experiencing violations of their rights. We have made a number of suggestions for legislative amendments to protect IT companies against unlawful raids, and to protect companies in cities where the local authorities are not so willing to fight for a better business climate.

In what ways can the digital revolution help improve the living standards of ordinary Ukrainians?

I believe that the better a government is, the less it is seen by the public. The system has to work efficiently and smoothly in a customer-oriented manner. It should not demand attention and be constantly resolving fresh crises via manual interventions. This is what e-Government can bring when it is implemented throughout the system – fully automated processes that exclude the human factor. The goal is to provide the fastest services in a manner required by citizens while minimizing the burden of government on ordinary people.