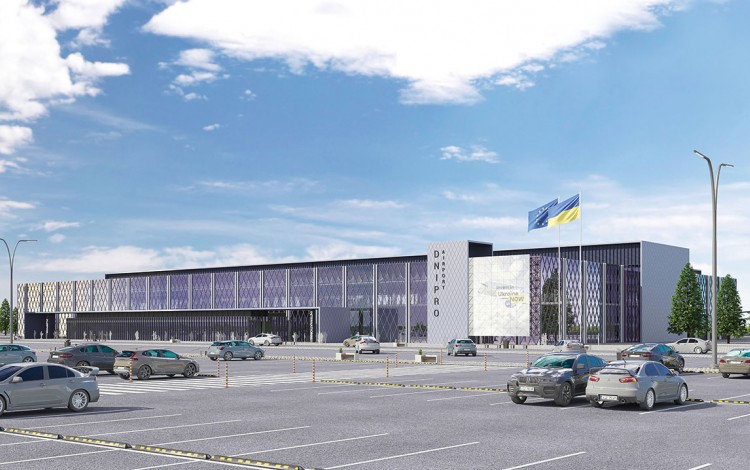 Work on the reconstruction of Dnipro International Airport began in autumn 2020. This architectural sketch gives an idea of how the main terminal building will look once complete
Business Ukraine magazine

Work began in autumn 2020 on one of Ukraine’s most strategically important infrastructure initiatives - the complete reconstruction of Dnipro International Airport. The project is being undertaken in public-private partnership (PPP) format between the Ukrainian state and businessman Oleksandr Yaroslavsky’s DCH Group. It aims to transform Dnipro’s existing air travel capacity and create a state-of-the-art international gateway to serve the entire region. The new-look airport is expected to become fully operational within two years and should dramatically improve Dnipropetrovsk region’s international connectivity.

“In Kharkiv, we built everything from scratch and developed the airport step by step, and now we are receiving awards and recognition in international ratings. We will be happy to apply our knowledge and experience in Dnipro,” comments DCH Group President Yaroslavsky.

“The new terminal complex in Dnipro is being built by a private investor and this airport is an example of a productive and profitable public-private partnership,” says Kirill Khomyakov, the head of Ukraine’s State Agency for Infrastructure Projects, commenting on the role of Yaroslavsky’s DCH Group in the Dnipro International Airport project. “The investor began work in parallel with the construction of the runway. Preparatory work is currently underway for the construction of terminal facilities with a capacity of up to 1000 passengers per hour. With stable financing, construction of the new airport will take three years.”

A comprehensive upgrade of Dnipro International Airport has been under discussion for a number of years. The current airport facilities have seen little modernization work since the 1991 collapse of the Soviet Union. As a result, the airport has become hopelessly inadequate for a city with over one million inhabitants and a rising international profile. The renovation project that is now underway envisages the construction of totally new runway and airport facilities. The Ukrainian government will be responsible for financing and managing the construction of a 3200 meter runway along with other airfield facilities including apron, taxiways, landing facilities, and more. Meanwhile, DCH Group will build new terminal facilities and associated technical infrastructure.

Yaroslavsky’s DCH Group is a logical partner for the Ukrainian authorities, having previously cooperated with the state in similar fashion to reconstruct Kharkiv International Airport during the run-up to the UEFA Euro 2012 European football championship, which Ukraine co-hosted together with Poland. This record of prior PPP cooperation gives grounds for optimism. “DCH Group has successful experience of public-private partnership with the construction of Kharkiv International Airport, so we are confident that both parties will fulfill their obligations and deliver a modern new airport in Dnipro,” comments Konstantin Yarosh, the Chief Engineer at NS-Dnipro, the project’s main contractor.

For DCH Group, the Dnipro International Airport project is evidence of growing engagement in the airport industry. Preparations for the current reconstruction work have been underway for the past two years, while DCH Group’s involvement in the project will continue with management of terminal facilities following the airport’s anticipated entry into service in the second half of 2022.

Volodymyr Vasilchenko is the Director of DCH Group’s New System AM, which serves as the management company of Kharkiv International Airport. He says the Group’s approximately USD 70 million commitment to the Dnipro airport project reflects a broader investment strategy. “DCH Group has long-term interests in the Ukrainian aviation industry and can offer considerable airport management expertise. The reconstruction of Dnipro International Airport is part of ongoing engagement in strategic sectors of the Ukrainian economy.”

Despite the general disruption to the Ukrainian economy caused by the global coronavirus outbreak and subsequent restrictive measures imposed to help contain the pandemic, construction of the new airport is currently on schedule. As building work continues, the project is expected to provide a significant boost to the regional economy. DCH Group officials plan to source as much of the necessary building material as possible from the Dnipropetrovsk region, including the Group’s own Dnipropetrovsk Metallurgical Plant (DMZ).

While the construction phase of the airport looks set to bring economic benefits to Dnipropetrovsk region, the real dividends are expected to emerge once the new facility becomes fully operational. Local authorities have enthusiastically backed the project and see it as the jewel in the crown of a wider infrastructure upgrade that will make the region significantly more accessible and economically attractive to investors.

Additional aspects of this infrastructure overhaul include ongoing improvements to Dnipropetrovsk region’s river transport capacity and significant modernization of the regional highway network connecting major regional cities such as Dnipro and Kriviy Rih. However, the most strategically important element of this upgrade remains the reconstruction of Dnipro International Airport. Indeed, a new ring road bypassing Dnipro and connecting to the Zaporizhzhia highway that is currently under construction will feature a major interchange specifically to accommodate the anticipated increase in traffic flows to and from the airport once the new terminal and runway facilities enter service.

The new airport will play a significant role in opening up the Dnipropetrovsk region for international cooperation. The current lack of a modern airport creates difficulties for the local business community in terms of meeting potential investors and business partners from Europe and Asia, not to mention North America. This hampers the development of cooperation and creates artificial barriers to joint projects. With the redeveloped airport complex set to be able to accommodate planes capable of serving on long-haul routes, the way will be open for direct connections to a host of international destinations across Europe and beyond.

The reconstruction of Dnipro International Airport should also have a considerable and sustained positive impact on the local Dnipro economy, particularly in the districts immediately adjacent to the airport complex itself. This will likely include the appearance of numerous businesses looking to meet demand created by the airport. Local authorities expect the redevelopment to lead to the arrival of a new generation of hotels and restaurants in the surrounding area. There will also be new opportunities for logistics facilities and warehousing, conference venues and associated services, retail parks, and car rental companies.

At present, Dnipro International Airport services around 300,000 passengers per year. Once the new airport enters service and additional airlines begin introducing fights to Dnipro, this figure could quickly rise to around one million passengers per year. While ambitious, such rapid growth would be very much in line with the broader trends witnessed at regional airports elsewhere in Ukraine during recent years, until the sudden pause in domestic and international travel early in 2020 due to the coronavirus pandemic.

From 2016 onward, Ukraine witnessed a boom in air travel that reflected the vast untapped potential of the country’s airports. The advent of visa-free travel for Ukrainian citizens to the European Union’s Schengen Area in June 2017 was a watershed moment for the country that provided a massive boost to the aviation industry. With record numbers of Ukrainians flying to EU destinations, new international carriers began entering the Ukrainian air travel market on an almost weekly basis, while some of Europe’s biggest budget airlines rapidly expanded the services they offered from a range of Ukrainian destinations.

Prior to the sudden freeze in travel early in 2020 in response to the coronavirus outbreak, Kharkiv International Airport had experienced an unprecedented period of sustained growth in passenger numbers alongside steadily increasing flight services from an expanding number of domestic and international carriers. Beginning in 2016, new passenger records were consistently established by the airport on a month-to-month basis. Meanwhile, annual passenger figures grew by 39.4% in 2019 alone to reach a new yearly high of 1.35 million. This impressive performance catapulted Kharkiv into the ranks of Europe’s fastest-growing airports. In research by Airports Council International (ACI) Europe covering the third quarter of 2019, Kharkiv International Airport took fourth place in the category of European airports serving up to five million passengers annually, with a growth rate for the period of 42.1%.

The team behind the reconstruction of Dnipro International Airport are hoping results will be no less impressive than Kharkiv’s stellar performance once the new airport begins welcoming flights within the next few years. The project has been long anticipated. It will make a major impact on the Dnipropetrovsk regional economy, while serving as a business bridge connecting Ukraine’s industrial and agricultural heartlands to the wider world. As a high-profile example of an ambitious public-private partnership, the new-look Dnipro International Airport will also serve as a reference point for other investors to follow as Ukraine looks to continue the country’s infrastructure upgrade.