Dnipropetrovsk region is the economic engine of southeastern Ukraine boasting an array of industry, infrastructure, tech, and agricultural opportunities for international investors 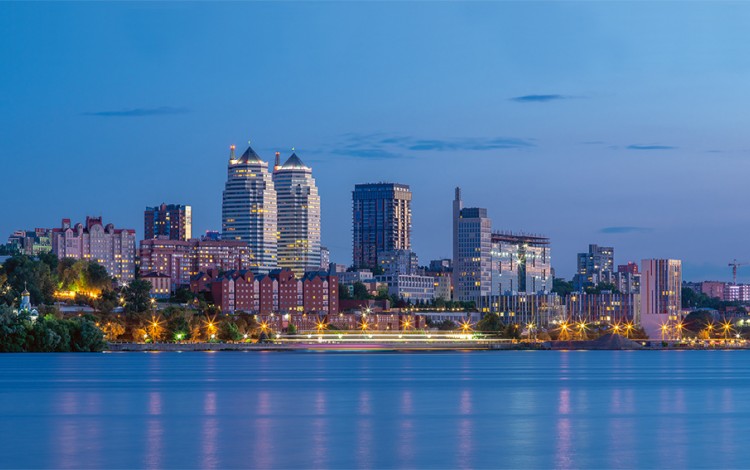 Dnipro is one of Ukraine's wealthiest cities and most important regional capitals (Photo: Sergey Nazarov)

The Dnipropetrovsk region in southeastern Ukraine ranks among the country’s most diverse and internationally competitive investment destinations. The region is home to many of Ukraine’s most important industrial enterprises and is also a key agricultural area, while a prominent Soviet-era role in the USSR’s space and rocket industries has helped fuel the growth of vibrant tech and IT sectors.

A glance at key economic data helps to explain the region’s rising profile. Dnipropetrovsk region is currently one of Ukraine’s leading exporters and occupies second place nationally in terms of exports. It plays a prominent role in the Ukrainian economy, accounting for more than 11% of total economic output in 2019.

The Dnipropetrovsk regional economy has traditionally been associated with heavy industry. Since Ukraine first entered the industrial age in the mid-nineteenth century, the region has been part of Ukraine’s industrial heartlands. For over one hundred and fifty years, it has been home to a host of major mining, metalurgical, and other industrial manufacturing enterprises.

Much of this early industrial growth was the work of international entrepreneurs attracted to southeastern Ukraine by the region’s wealth of natural resources. One of the most prominent contingents within this international influx was a large Belgian community. Belgian companies and industrialists established many of the Dnipropetrovsk region’s biggest enterprises and were responsible for landmark developments such as the electric tram system of public transportation in the city of Dnipro.

This international involvement in the industrial sector is still very much evident today. Global steel and mining giant ArcelorMittal has had a major presence in the region’s second-largest city Kryvyi Rih for the past fifteen years. Officials at ArcelorMittal Kryvyi Rih recently confirmed plans to invest a further USD 700 million over the next three to four years in new projects with an ecological component.

While heavy industry continues to play a central role in the Dnipropetrovsk regional economy, other sectors of the economy are also becoming increasingly significant. The tech industry is a good example of this diversification. Ukraine’s IT industry has experienced exponential growth in recent years and is now one of the country’s leading exports, with Dnipropetrovsk region at the forefront of this progress.

The region’s biggestr city, Dnipro, has emerged over the past decade as one of the largest IT hubs in the country and generally ranks fourth behind Kyiv, Kharkiv, and Lviv. Around 400 IT companies currently operate in the city, employing approximately 12,000 IT professionals. These companies work predominantly with an international client list based in the European Union and the United States.

Dnipro’s IT industry and wider tech sector benefit from the city’s historic associations with the Soviet missile and space exploration programs, which helps to guarantee a steady flow of highly qualified graduate recruits. During the Soviet era, Dnipro served as a design and production hub for space rockets and military missiles, earning it the nickname “Rocket City.” A number of major industrial enterprises form the legacy of this period, while efforts continue to revitalize the industry.

In common with the rest of Ukraine and the wider world, the Dnipropetrovsk region economy has been hard-hit this year by the global coronavirus crisis. However, with key sectors such as heavy industry, agriculture, and tech being relatively insulated against the negative impact of the pandemic, the decline has been relatively modest.

Indeed, this year’s pandemic conditions have not prevented continued investment and growth in some sectors. For example, major Ukrainian agriculture and transport company Nibulon has completed the construction of a new high-capacity transshipment terminal on the Dnipro River in Dnipropetrovsk region. This innovative USD 22 million project features state-of-the-start technologies and has created more than one hundred new work places.

There are likely to be significant further investments in riverside infrastructure during the coming years. Dnipropetrovsk region boasts a strategic location straddling the Dnipro River and surrounded by the black earth of Ukraine’s fabled argicultural heartlands. This leaves the region well-placed to become a major beneficiary of current efforts to boost river traffic on the Dnipro and revive the role of the waterway as a key transport route for agricultural and industrial commodities.

Discussions are continuing over ambitious plans to establish an inland river transport corridor linking the Baltic and Black seas via Poland, Belarus, and Ukraine. This route would include the Dnipro River, with the Dnipropetrovsk region again poised to gain as a logistical hub. Meanwhile, legislation passed in late 2020 by the Ukrainian parliament will dramatically increase the Dnipro River's cargo transport potential and should pave the way for a wave of investment in river transport infrastructure.

Infrastructure is currently one of the key focuses for the region as it seeks to make the most of its advantageous geographical location. As well as the development of river-related infrastructure, the local government has also allocated around UAH 1.3 billion in 2020 for the reconstruction of approximately 150km of roads in the region. In addition to this funding, the Dnipropetrovsk Regional Administration and the European Bank of Reconstruction and Development (EBRD) have signed a EUR 50 million agreement to finance the upgrade of regional highways.

Arguably the most eagerly anticipated infrastructure project in the region is the redevelopment of Dnipro International Airport. This public-private partnership is currently at the preliminary construction phase. Once completed, it is expected to transform the region’s international accessibility. The Ukrainian authorities will finance the construction of new runway facilities, while the development of new terminal buildings and surrounding infrastructure will be handled by DCH Group, which is the company behind the successful redevelopment of Kharkiv International Airport prior to the Euro 2012 European football championship in Ukraine.

About the author: Olexii Ivanchenko is Deputy Executive Director at UkraineInvest.