FROM SOVIET TO AMERICAN LOCOMOTIVES 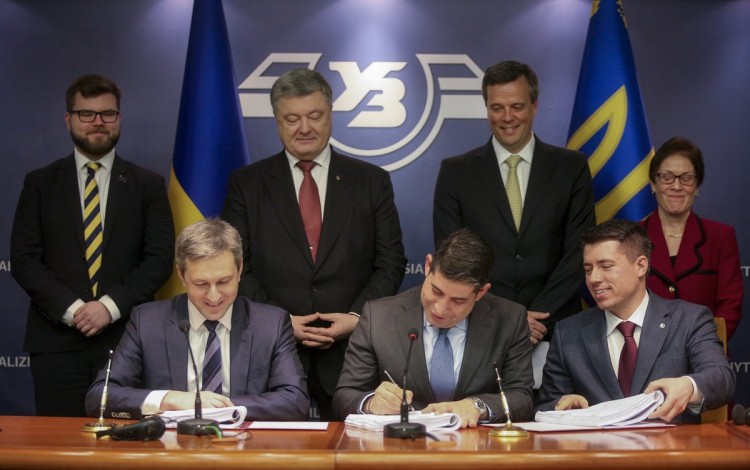 Ukraine signed a USD 1 billion agreement with General Electric subsidiary GE Transportation on 23 February that will see the American company play a key role in Ukraine’s plans to modernize the country’s largely Soviet-era railway transport fleet. In line with the agreement, GE Transportation will provide Ukraine with 30 new locomotives over the next year, while a second phase of the contract will see the production of 225 new locomotives and upgrades to 75 existing locomotives. The deal will create jobs in both the US and Ukraine, with the Ukrainian side set to account for around 40% of parts and assembly as well as servicing at a planned Ukraine-based service center.

The agreement paves the way for a radical overhaul of Ukraine’s railway transport fleet, much of which dates back to the Soviet era. Ukraine has one of Europe’s largest railway transport networks and offers excellent transit and gateway potential for European markets, but the country’s railway infrastructure suffers from outdated machinery and a lack of investment.

The arrival of modern General Electric locomotives should help to strengthen the efficiency of Ukraine’s railway infrastructure while providing a boost to export capacity and helping Ukrainian agricultural producers to deliver more crops to global markets. Ukraine has been posting growing agricultural exports to international markets in recent years but has struggled to meet transportation demand due to a shortage of locomotives during the harvest peak season. Some of the new General Electric locomotives are expected to enter service in time for the 2018 harvest.

This is the latest in a series of recent agreements between Ukraine and American companies that highlight strengthening commercial ties between the two countries. Some of these contracts have gone to regions of the US where the White House is particularly eager to deliver on 2016 campaign promises, leading to speculation that the deals come with an unspoken political component. Ukraine began importing US coal from Pennsylvania in mid-2017, while work on the new locomotives bound for Ukraine will take place at GE’s Pennsylvania plant. Pennsylvania played an important role in President Trump’s 2016 election victory, with many voters attracted by promises of more jobs and a revival of traditional industries like coalmining and machinery manufacturing.

Ukraine’s growing business cooperation with the US is part of a general broadening of commercial horizons taking place in the wake of the country’s 2014 Revolution of Dignity and subsequent Russian invasion. With Ukrainian businesses cut off from traditional Russian markets, the country has undergone a period of economic shock therapy that has involved reorientation towards global markets. Dan Bilan, who heads up the Ukrainian government’s investment promotion agency UkraineInvest, told the Financial Times that he hoped this new General Electric contract would help Ukraine gain further ground internationally. The aim of boosting ties with top tier companies like General Electric, he said, was, “to make Ukraine part of their global supply chain.”