Estonia’s flagship Ülemiste City campus hosts over 300 companies and in excess of 8,000 employees from more than 50 different countries 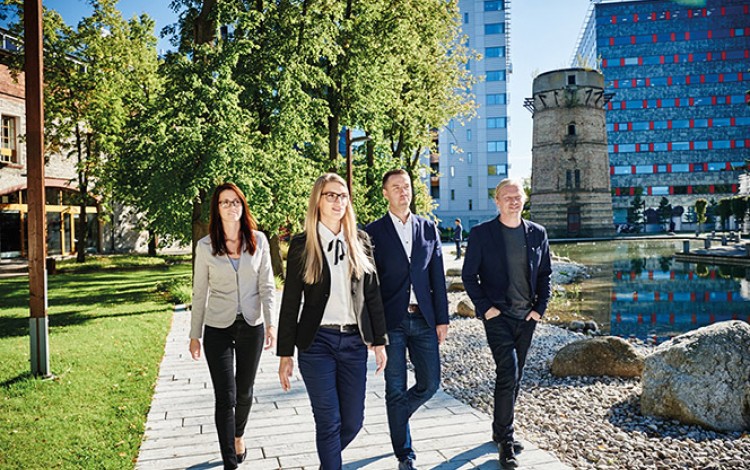 Ülemiste City has given the historical industrial area of Tallinn a new lease of life. The former heavy industries of the district have been replaced by modern office spaces, as well as green areas and parks which bind the offices into a unified whole
Business Ukraine magazine

Ülemiste City is the biggest smart business campus in the Baltics. It is located in Tallinn, Estonia. The campus is conveniently positioned within a five-minute walk from Tallinn International Airport and the railway station. It is a 15-minute drive to the city center and to the port of Tallinn. The campus is situated within close proximity to high-throughput intercity highways on the Tallinn-Tartu and Tallinn-St. Petersburg routes.

History of the Ülemiste district

The Ülemiste City district has a long history stretching back to long before the concept of the current Smart City was first developed. In 1897 Nicholas II, the last Emperor of Russia, approved the articles of association for a new company – the public limited company “Dvigatel” (the Russian word for engine). The core activities of this new company were the maintenance of planned railways, production of railway wagons, and the maintenance and repair of locomotives. The Dvigatel area survived both WWI and WWII, switching to military manufacturing during each conflict. In the 1980s, the plant began mass-production of nuclear energy equipment. Preparations were also made to develop a space missile shield system. When Estonia regained independence in 1991, Dvigatel lost all its market potential in its current form. In 1996, the complex was reestablished and privatized by Mainor AS.

The beginning of Ülemiste City

In 2005, a decision was reached to completely restructure the area. As Tallinn was lacking a modern technology campus, the idea was to develop a knowledge-based and modern Smart City. As a reference model for the future Ülemiste City, the owners chose Kista Science City, which is a technology campus near Stockholm sometimes referred to as the Silicon Valley of the North. Ülemiste City has given this historical industrial area of Tallinn a new lease of life. The former heavy industries of the district have been replaced by modern office spaces, as well as green areas and parks which bind the offices into a unified whole, creating an inspiring environment for all the companies operating here.

Ülemiste City features more than 100,000 square meters of office space and around 10,000 square meters of cultural and educational spaces. Current Ülemiste City tenants include the creator of one of the world’s most effective e-Tax systems, the Estonian Tax and Customs Board. You will also find a large number of the IT companies behind the success story of Estonian e-government, as well as offices and development centers of many foreign corporations and a dedicated E-Showroom presenting the innovation for which today’s Estonia is famous. The campus offers a full range of services designed to increase the efficiency of businesses, keep expenditure under control, and decrease the environmental load.

Additional services provided for employees help them to manage their daily errands as smoothly as possible. Alongside an array of other restaurants and coffee shops, the business campus houses “Dvigatel” - the largest restaurant in Estonia. There is also a kindergarten, a dentist, a private medical clinic, and a drycleaners. A sports club with a swimming pool and a grocery store will soon open. The largest shopping center of Estonia is located only a few minutes walk away.

Ülemiste City is a community that seeks to give back. Regular events hosted at the business campus make communication with one another easy. It is possible to introduce services, organize meetings and stage joint events, helping to create new effective business contacts together. The numerous B2B services offered by other campus tenants are always at the disposal of companies as well.

The future of Ülemiste City

The vision is that Ülemiste City will be the new CBD of Tallinn and one of the top hotspots in Europe. The campus will grow in the near future from 100,000 square meters to 200,000 square meters of commercial space, while the campus population will rise from 8,000 to 15,000 people. The number of companies will increase from 300 to 500. Hotel and residential area development will start.

Located at the crossing point between the airport and the future RailBaltic railway terminal, Ülemiste City’s developed infrastructure and smart city concept will make it the most important business center in Tallinn. One of the strategic missions of Ülemiste City’s management is to attract international businesses and innovators to the campus and to Estonia. In order to make this a convenient and attractive option for international clients, Ülemiste City provides all-inclusive business relocation and soft landing services.

WHY ESTONIA AND WHY ÜLEMISTE CITY?

“After thorough analysis of several locations in Europe, Tallinn was identified as the most favourable location for an IT Center due to its local business climate, well developed e-government infrastructure, and overall IT focus and IT-student ratio. Another important factor for the decision was the possibility to expand our office space continuously according to our needs. The 400 square meters of space rented at the beginning has already expanded to 3,000 square meters.”