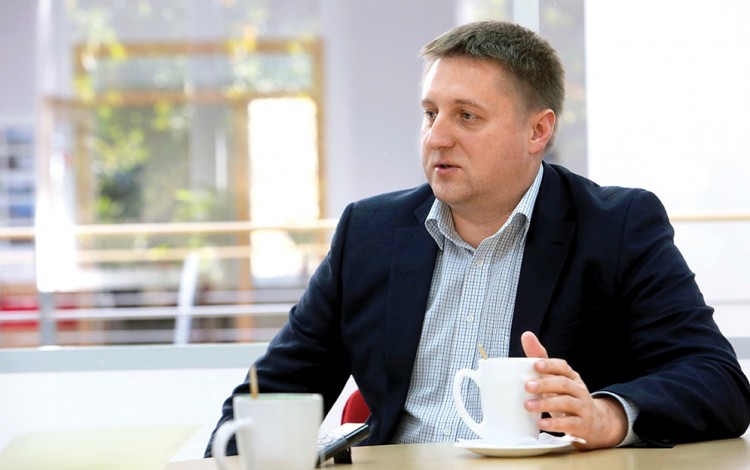 About the interviewee: Viktor Ponomarenko is the General Manager of ProCredit Bank in Ukraine
Business Ukraine magazine

As they arrive for work each morning, employees at the Ukrainian head office of ProCredit Bank on Kyiv’s Prospekt Peremohy have to negotiate their way through teams of construction workers. The bank’s HQ is currently undergoing ambitious renovation works that will eventually see the introduction of a convenient new elevator and a range of energy efficiency measures. This functional and forward-looking renovation project is an apt metaphor for the innovative structural reforms the bank itself has undertaken over the past eight years, paving the way for ProCredit Bank to weather the post-Euromaidan turbulence in the country like almost no other Ukrainian bank.

ProCredit Bank’s strong recent performance stands in stark contrast to the uncertainty surrounding much of the Ukrainian banking industry. Dozens of Ukrainian banks have gone out of business or been closed down since the 2014 Euromaidan Revolution as the sector has experienced the biggest shakeup since the Soviet collapse. Against this backdrop of instability, ProCredit Bank has thrived. Since late 2014, the bank has managed to climb from seventieth to nineteenth nationally in terms of assets, while posting 36% growth in its loan portfolio over the same period.

Learning the lessons of 2008

ProCredit Bank’s General Manager in Ukraine Viktor Ponomarenko puts this down to the strong foundations laid by the bank following the Credit Crunch crash of 2008. As global markets tanked throughout autumn 2008 in the wake of the unravelling subprime mortgage fiasco in the US, Ukraine fell harder than most. It was to prove a painful lesson for the country’s banking sector, but Ponomarenko believes it led to internal changes that made ProCredit Bank’s robust response to the current difficulties facing the Ukrainian economy possible. “We revised our entire business model and focused attention on improving our corporate infrastructure,” he recalls. “Given the magnitude of the crisis, we were able to prove ourselves a sound investment within a relatively short period of time. We spent the years from 2009 to 2013 fixing the system. By the time the fresh challenges of 2014 arrived, the hard work had already been done.”

This internal reform process involved heightening the bank’s traditional emphasis on the SME sector, reducing branch networks, and streamlining personnel policies. At the same time, there was a concerted effort to invest more in existing staff and focus on creating user-friendly facilities. Following these post-Credit Crunch changes, the number of employees at the bank dropped from a pre-2008 figure of 2000 to around 300. By reducing personnel, the bank has been able to invest more time and energy into the professional development of individual staff. Prior to 2008, employees would generally be interacting with clients within two weeks of joining the bank. They are now expected to complete a one-year paid probationary period that includes extensive international training in Bulgaria, Macedonia or Serbia alongside fellow recruits from the eleven other regional countries where the German-based ProCredit Group is present. Existing staff also regularly undertake regular training in Germany.

Ponomarenko says these changes have resulted in ‘huge efficiency gains’. He identifies better infrastructure and greater investment in staff as key factors driving the bank’s profitability, which is no hollow boast given that ProCredit Bank in Ukraine has posted annual profits consistently since 2011. This improved performance would be eye-catching in any environment, but the real test for the viability of ProCredit Bank’s internal reforms arrived with the aftershocks of the Euromaidan Revolution and the subsequent upheavals of 2014. “We were already in a position to develop and were prepared to operate in a difficult environment,” Ponomarenko recalls. “We wanted to grow, our shareholders wanted to grow, and we had the resources to do so.”

This growth has come via a concentration on the small and medium-sized business niche. The bank is now focusing increasingly on its core interests in the SME sector, and has reduced exposure to micro-entrepreneurs while scaling down personal banking services. “Increased specialization in the SME sector is a big advantage as it allows us to tailor our services and provide the kind of training to our employees that will help them meet the specific needs of our customers,” says Ponomarenko.

The bank’s work in the SME sector will now also include a role as local partner in the European Investment Bank Group’s recently unveiled ‘Supporting Innovation in Ukraine’ initiative, which aims to provide Ukrainian SMEs with increased access to financing. Ponomarenko sees this as a continuation of the bank’s existing engagement with the SME community and says cooperation with the EIBG brings additional benefits that ProCredit Bank can pass on to clients. “In the current environment we can all gain from greater certainty and reliability. This programme reduces risk and uncertainty.”

The scope for effective innovation financing throughout Ukraine’s SME sector is undoubtedly vast. Ponomarenko identifies agriculture as one of many sectors where the introduction of modern technological approaches can have a huge impact. “Ukraine is an attractive market but it requires a lot of upgrades,” he says. “In this context, innovation is not limited to new inventions, but can also apply to the processes of modernization.” Ponomarenko sees this support for sustainable and long-term economic growth as a good fit for the corporate ethos of ProCredit Bank as a whole. “We are a development-oriented institution. Our shareholders do not think exclusively in terms of profit maximization. We aim to help implement sound and sustainable business models.”

Reforms moving in the right direction

Forty-year-old Ponomarenko is already a veteran of the Ukrainian banking sector. The Sumy Oblast native joined ProCredit Bank in 2004, having begun his Ukrainian banking career in 1997 following graduation. He says he is broadly optimistic about the changes taking place in the country’s banking industry and has been encouraged by the reforms implemented by the National Bank of Ukraine (NBU) since Euromaidan. Nevertheless, he is keen to stress the scale of the challenges the sector still faces. “We are currently in a transition period that is likely to continue for another few years. The changes introduced by the NBU have been striking, but it is still too early to draw conclusions.”

Ponomarenko argues that the current banking sector upheavals are actually inevitable, given the relative youth of the country’s financial services sector as a whole. The experience of ProCredit Bank over the past decade has demonstrated the possibilities for banks that are able to adapt their business models to the evolving realities of the Ukrainian market, but he believes the industry as a whole needs time to mature. “The Ukrainian banking sector is still very young and has a lot to learn. In this environment, it is understandable that the changes currently taking place have created a sense of uncertainty. But as long as we are generally moving in the right direction, this is not a problem.”