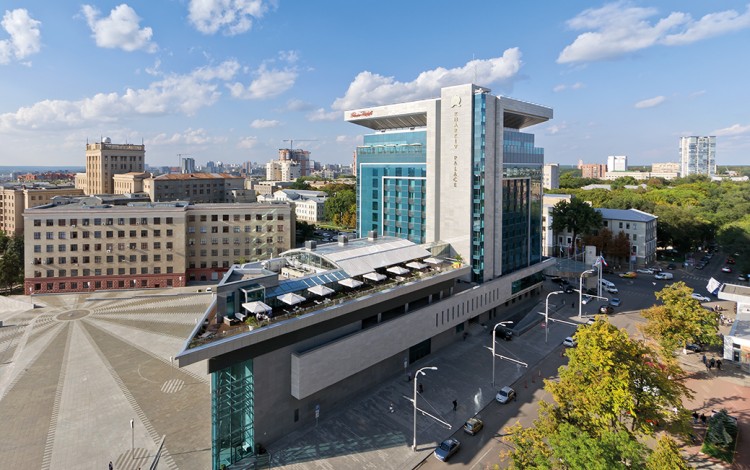 The five-star Kharkiv Palace welcomed senior government officials and guests from across Ukraine on 8 April for the Mintrans Forum, which focused on the development of urban infrastructure. The event took place under the auspices of the Kharkiv municipal authorities and with the support of Oleksandr Yaroslavsky’s DCH Group, which owns the hotel venue.

“Kharkiv has set itself the goal of moving towards a European appearance and modernization in all spheres of everyday life,” commenting acting Kharkiv Mayor Ihor Terekhov during his introductory address. Additional speakers included the Deputy Head of the Office of the President of Ukraine, Kirill Tymoshenko; Deputy Minister of Finance Oleksandr Hava; DCH Group President Oleksandr Yaroslavsky; and the Head of Ukraine’s Ukravtodor State Road Agency, Oleksandr Kubrakov.

Also in attendance in Ukraine’s second city where the mayors of Cherkasy, Chernihiv, Lutsk, Mariupol, and Kramatorsk. They were joined by senior officials from the European Investment Bank and European Bank for Reconstruction and Development, together with a number of diplomats. The program of the Forum included a panel discussion of mayors within the framework of the Association of Ukrainian Cities.

The Forum also saw the signing of a cooperation memorandum between the Kharkiv municipal authorities and Turkish commercial vehicles manufacturer Karsan that is expected to pave the way for the purchase of Turkish buses and lay the groundwork for future joint production of buses in Kharkiv.

The Mintrans Forum agenda focused on the future of Ukraine’s urban spaces. Key topics under discussion included the development of municipal infrastructure in Ukraine, the digitalization of urban management, and options to improve energy efficiency.

One of the highlights of the forum was a landmark national panel on the development of industrial parks in Ukraine. In connection with the forum, representatives of iPark and Bila Tserkva visited Kharkiv’s Ecopolis HTZ site, which aims to serve as one of Ukraine’s leading tech and innovation hubs. Together with investors and local authorities, they discussed the possibilities for the development of industrial parks in Ukraine.

Ecopolis HTZ is a new generation business park that is currently being developed by DCH Group in Kharkiv. It features an industrial park centered on the site of the Kharkiv Tractor Plant. Ecopolis HTZ plans to attract around USD 1 billion in investment by 2033 and is at the heart of the Ukrainian Silicon Valley initiative which Yaroslavsky and local Kharkiv authorities are currently implementing on behalf of Ukrainian President Volodymyr Zelenskyy.