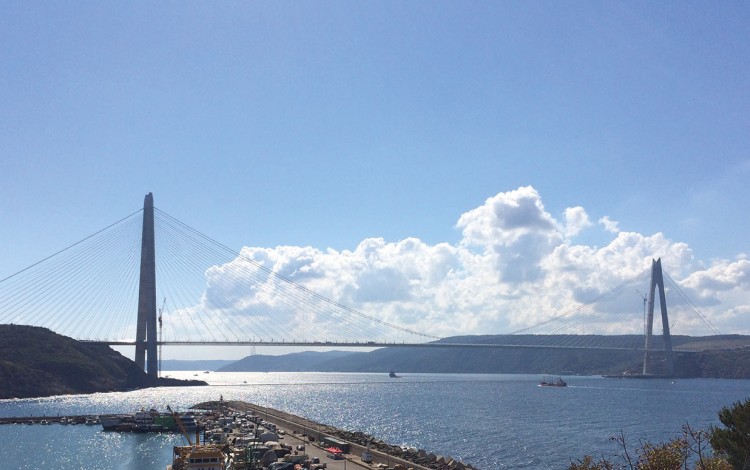 Turkey is one of the world’s leading PPP countries and boasts a long list of major public-private-partnership projects including key infrastructure elements such as Bosphorus bridges and tunnels (Photo: VikiPicture)
Business Ukraine magazine

Ukraine’s Deputy Minister of Economic Development and Trade Mikhail Titarchuk marks one year in office at the end of 2017 having spent a significant portion of the past twelve months in Turkey as part of efforts to tap into Turkish public-private-partnership (PPP) expertize and lay the foundations for similar success in Ukraine.He believes Turkey’s PPP achievements can help point the way towards an attractive public-private framework that can energize the Ukrainian investment environment.

Deputy Minister Titarchuk is one of the new generation of young Ukrainian officials in senior positions who are working to manage Ukraine’s ambitious transition away from more than two decades in the post-Soviet wilderness. At just 33 years of age, he is relatively new to government work. Titarchuk took on his first role in 2015 as a regional administration head in Bilhorod-Dnistrovskiy in Odesa Oblast, before accepting his first position in the Groysman government in June 2016 as deputy minister of the Cabinet of Ministers.

Titarchuk sees PPPs as an opportunity to improve the Ukraine’s investor appeal while providing the country with what is widely recognized as a long overdue infrastructure overhaul. Prior to entering government, the Deputy Minister worked extensively across Africa in UN missions and the mining industry. He concedes that aspects of Ukraine’s existing infrastructure lag behind parts of sub-Saharan Africa.

The Economy Ministry is currently working on a concession law with the support of First Deputy Prime Minister Kubiv and the EBRD that will form the backbone of Ukraine’s renewed PPP drive. Titarchuk is optimistic the concession law will pass through parliament and gain official status in the second half of 2018. “This law will provide new impetus to the entire Ukrainian economy,” he says. In anticipation of the law’s successful passage, a number of pilot projects are currently at the development stage with a view to swift launches once the new legislative foundations are in place. These pilot PPP projects focus on key infrastructure elements including Kherson and Olvia seaports as well as Chornomorsk ferry terminal on the Black Sea.

While a new concession law will certainly help to lay the groundwork for greater PPP activity in Ukraine, Titarchuk recognizes that it is only one piece of a larger jigsaw. Ukraine already has significant PPP legislation, but the country lacks the necessary knowhow to implement projects at the local level. “We are creating a new legislative framework but we still face the problem that there are no well-trained people on the ground to prepare PPP projects and manage implementation.”

This is where Turkish experience could prove so vital. Turkey is one of the world’s leading PPP countries and boasts a long list of major PPP projects numbering over 200 with a total value in excess of USD 120 billion. Flagship endeavors include the currently ongoing redevelopment of Istanbul International Airport, which comes with a USD 36 billion price tag, and the 5.4km Eurasia Tunnel. The PPP model has also helped Turkey to modernize the country’s healthcare industry and road networks.

Knowledge exchange in the PPP sphere is an important part of the evolving strategic relationship between Ukraine and Turkey. Presidents Poroshenko and Erdogan signed off on the creation of a PPP Commission in 2016, highlighting the sector’s importance to bilateral ties. Deputy Minister Titarchuk regards this Turkish support as a key element in the drive to access Ukraine’s untapped PPP potential. He has made numerous visits to Turkey and seen firsthand how effective a tool it has proven for the Turkish economy. The Deputy Minister says the experience has left him amazed and impressed by the scale of Turkey’s PPP undertakings. “If you are going to study, then it makes sense to study from the best,” he quips. “As Turkish colleagues like to say, nothing beats learning by doing.”

Titarchuk has led a series of delegations to Turkey made up of senior managers drawn from across Ukraine’s government ministries. By engaging with a range of academics, members of the business community, and government counterparts in Ankara, the aim is to absorb the lessons of the Turkish experience across the PPP spectrum and create the basis for future implementation in Ukraine. However, Turkish-Ukrainian PPP cooperation is not limited to knowledge exchange. The Deputy Minister expects to have a number of concrete PPP projects ready for consideration by the time the bilateral PPP Commission meets again in spring 2018, and sees Turkish companies as the most likely candidates to enter the Ukrainian PPP market once the new legislative framework is operational. “Turkish companies want to invest in Ukrainian PPP projects. I fully expect the first wave of PPP investment to come from Turkey.”

About the interviewee: Mikhail Titarchuk is Ukraine’s Deputy Minister of Economic Development and Trade