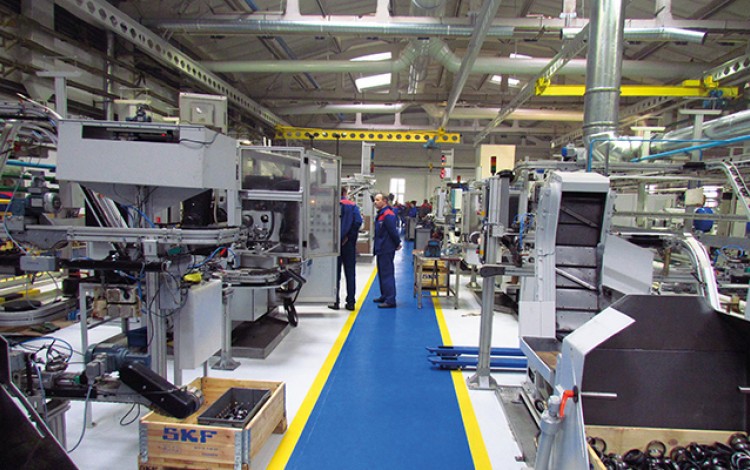 SKF has been operating a production facility in western Ukraine since 1998. What made the company choose Lutsk?

SKF experts initially studied the majority of bearing production factories in the former USSR. Following this analysis, and together with related financial audits, the Lutsk plant was selected for acquisition. The bearing production plant in Lutsk (at the time named GPZ-28) was the last of its kind constructed in the former USSR and hence was better technically equipped and generally more up-to-date. Besides this advantage, the Lutsk plant is also located very close to EU markets (just 70km from the Polish border). Perhaps the most important factor was the quality of the existing management of the plant and the general professional skills of plant employees, which compared favourably to other available options.

At present 95% of all the SKF products made in Ukraine are subsequently exported to international markets. Which countries represent the primary markets for the goods SKF produces in Ukraine, and how has this export market developed over the past 17 years?

SKF Ukraine currently exports its products to almost 50 countries worldwide, with the majority of these exports going to Germany, Italy and Sweden. To provide a better understanding of the export situation, I would like to provide several figures. In 1998, sales volumes at the Lutsk plant amounted to USD 5.3 million annually, including USD 1 million in exports. In 2014, sales volumes amounted to USD 89.7 million, including USD 86.6 million in exports. Sales volumes over the period have increased 17 times as a direct result of this growing export business. Such growth would have been impossible without SKF. The Lutsk plant has not only benefitted from the right to use the SKF brand globally, but has also gained access to world markets through existing SKF sales channels. This growth is also the result of major investments by SKF that have made possible the modernization of equipment, introduction of new technologies, and significant investment in the plant’s human resources.

As a major industrial exporter from Ukraine, do you anticipate any changes to your business model as a result of the free trade component of the EU-Ukraine Association Agreement, which will be fully implemented starting in January 2016?

Our products are not subject to export duties, so for SKF Ukraine the EU-Ukraine Association Agreement is primarily more important in a political and symbolic sense.

Your corporate policy stresses environmentally sound activities and the reduction of CO2 emissions. What lessons can you share with other Ukrainian industrial producers in terms of contributing to a cleaner environment?

Reducing CO2 emissions has long been a core corporate value for SKF Ukraine. In the 17 years that SKF Ukraine has been part of the SKF family, a wide range of initiatives have been introduced at the Lutsk plant to help reduce CO2 emissions. For instance, over the past five years the share of CO2 emissions in relation to value added by a product has been reduced by almost 42%. Thanks to an extensive investment program, over the past couple of years we have replaced 25 existing transformers at the Lutsk plant with modern and more environmentally friendly transformers of Italian origin. As a result of all these environmentally friendly innovations, SKF Ukraine has qualified for the energy management standard ISO 50001.

Many international companies are closely following the reform process for signs that now is a good time to enter the Ukrainian market. What does your experience of doing business in Ukraine over the past year suggest about the reform process and the commitments of the government to improve the investment climate?

We have considerable experience of doing business in Ukraine and have faced all manner of challenges over the years. The biggest problem has always been, and unfortunately continues to be, the system of VAT reimbursement in Ukraine. Even after the introduction of the so-called automatic system of VAT reimbursement, in certain months there have been instances when our company has found itself removed from the final list of companies qualifying for automatic VAT reimbursement, despite this being contrary to the provisions of the applicable law.

The other key challenges we have encountered relate to the frequent changes to Ukraine’s tax and customs legislation. These changes are often introduced without providing companies with the new legislation in advance for prior study and implementation preparations. Despite these obstacles, we always adhere to each new piece of legislation. However, it is important to note that there have been and still are occasions when the authorities are not following the legal requirements themselves.

In general, Ukraine today offers all the core conditions for developing a successful business: the tax burden is in line with European levels, customs procedures are better organized, there is support for business from the local authorities, and the country’s infrastructure is increasingly well developed. Most importantly, Ukraine offers an abundance of well-educated and professional employees. I am convinced that there are considerable opportunities for potential investors who are prepared to be decisive and open up new businesses in Ukraine.

What are your plans for the future development of SKF operations in Ukraine?

There are numerous development perspectives we will be pursuing in Lutsk, including the enlargement of the plant’s product range, further replacement of technical equipment, modernization of production, and further training and development of our employees. SKF Ukraine prides itself on being a socially responsible company and we will continue to develop our social programmes. The biggest value for any company is its people!

About the interviewee: Vladimir Tsybulsky is the Managing Director of SKF Ukraine. He is a graduate of Lviv Polytechnic Institute and also studied at Harvard Business School.