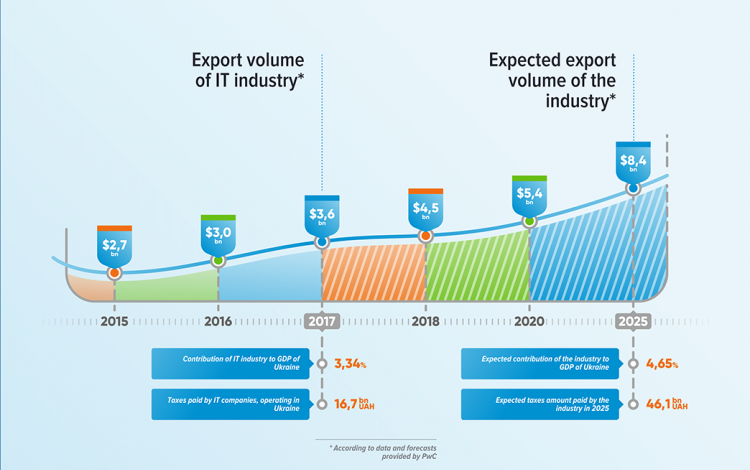 The steady rise of the Ukrainian IT sector: IT exports have grown by 25% since 2015 (Graphic: IT Ukraine Association)
Business Ukraine magazine

A yearly IT sector overview released in January 2018 by the IT Ukraine Association highlights the robust performance of the country’s IT industry. Ukraine’s IT exports grew by 20% year-on-year in 2017 to reach a new record of USD 3.6 billion. This figure is projected to increase to USD 4.5 billion in 2018, with the forecast for 2025 currently standing at USD 8.4 billion, or around 4.65% of anticipated GDP.

This strong upward trend is also serving to bolster Ukraine’s state coffers, with UAH 16.7 billion (approximately USD 580 million) paid by IT companies to the Ukrainian budget in 2017. Ukraine’s IT industry placed third among the country’s export revenue generators in 2016 behind metallurgy and the food industry. It will likely maintain this position once all data for the past twelve months is available.

This newly released IT industry survey found that Ukraine currently has 116,000 IT specialists with an average monthly salary of USD 1,600, making IT one of the most lucrative professions in the country. Growing numbers of young Ukrainians are turning to IT as a career choice, with high salaries and transferrable skills making it an ideal choice for both school leavers and those looking to switch professions. The survey forecasts that by 2025, Ukraine will have 242,000 IT specialists, or more than twice the current number. For now, it remains a male-dominated industry, with men accounting for 72% of all IT specialists. The average IT sector employee is currently 30 years old.

There is no single regional focus within the sector and no indication that a geographically distinct Ukrainian Silicon Valley is likely to take shape. On the contrary, Ukraine has 16 IT clusters located in major cities and oblast centers throughout the country. Unsurprisingly, the current leader in terms of the number of specialists it boasts is the capital city Kyiv. Dnipro occupies the number two position, followed by Lviv and Kharkiv, with Odesa in fifth place.