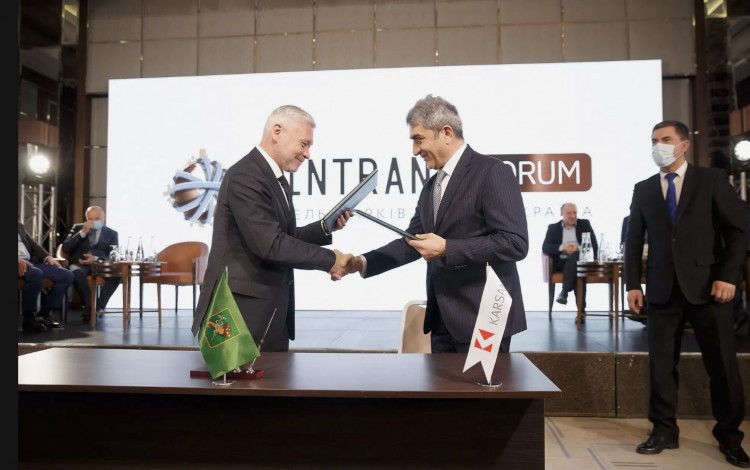 Kharkiv municipal authorities and Turkish commercial vehicles manufacturer Karsan have signed a cooperation memorandum that is expected to pave the way for the purchase of Turkish buses and lay the groundwork for future joint production in Ukraine’s second city. The document was signed by acting Kharkiv Mayor Ihor Terekhov and Karsan General Director Okan Bas during the framework of the April 8 Mintrans Forum at the five-star Kharkiv Palace hotel.

“This agreement refers to ready bus models, not prototypes,” commented Okan Bas. “Mayor Terekhov had the opportunity to see for himself during his visit in Turkey. Following this visit, we decided to conclude a cooperation memorandum with Kharkiv. We are considering an agreement on the sale of 100 units for Kharkiv. We are also discussing the localization of production in Kharkiv and exploring these possibilities in detail.”

Karsan is a Turkish commercial vehicle manufacturer which cooperates with a number of global brands including Peugeot, Hyundai, and Fiat. The company also produces a range of specialized vehicles including ambulances, taxis, and police cars.

Acting Kharkiv Mayor Terekhov shared details of his earlier trip to Turkey to learn more about Karsan models. “We were able to get acquainted with the company’s bus production facilities and a range of different models including 22- and 58-seat buses with low floors that would be particularly suitable for the streets of Kharkiv,” he noted.

Terekhov expressed optimism over the possibility of developing joint production in Kharkiv. “I am highly interested in bringing such large-scale production facilities to Kharkiv. We already know about the Kharkiv trams that will be produced at the city’s Ecopolis HTZ site. We can also launch the production of buses. Can you imagine the jobs this would create and savings for the city this could lead to? It is extremely economically attractive.”

According to a number of guests and speakers at the Mintrans Forum, the possible joint production of Karsan buses in Ukraine is indeed set to be located at the Ecopolis HTZ high tech business park of businessman and DCH Group president Oleksandr Yaroslavsky. This would be in line with similar developments already underway at Ecopolis HTZ, where preparations are in progress to begin joint production of trams together with partners from the Czech Republic.