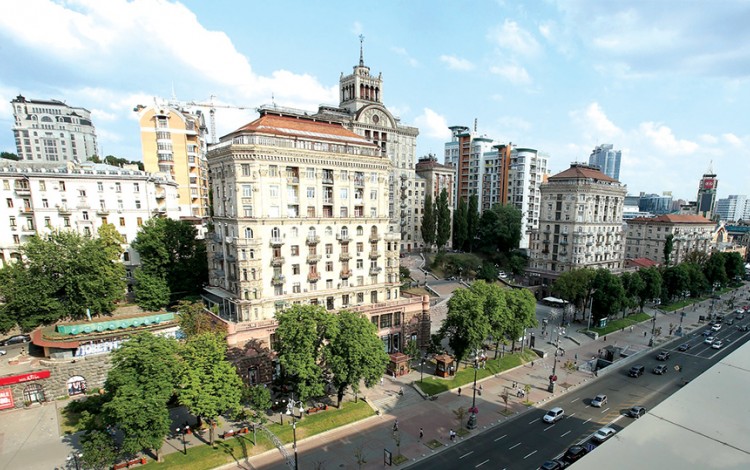 As a rule, Kyiv’s expats overwhelming choose to live in the city center and usually in older historical buildings. When discussing this topic with Ukrainian friends, it is not uncommon to hear criticisms of this choice along the lines of, ”It’s noisy there, the air is bad, there’s no parking, the entrance areas are terrible, those buildings have bad infrastructure,” and so forth. This sense of stigma attached to living in Kyiv’s historic downtown area is so commonplace that it has become conventional wisdom among large parts of the local population. Such thinking is one of a number of factors contributing to the underdevelopment of Kyiv’s center. While downtown Kyiv is regarded as a place for expats, tourists, restaurants and cafes, the city center can often appear quite shabby when compared to the historical downtowns of other European capitals, with many buildings and apartments in desperate need of renovation. By incentivizing investment in these historic districts and encouraging gentrification, the Kyiv authorities could significantly improve the overall quality of life in the Ukrainian capital while also providing a sustained boost to the local economy.

There are two basic types of older buildings in central Kyiv, Tsarist and Stalinist. Tsarist (or prerevolutionary) buildings date from the late 19th to early 20th centuries. They incorporate many styles (most notably Art Nouveau), and feature numerous ornate architectural flourishes. Most Tsarist buildings are protected architectural monuments. However, it should be noted that unlike in many other countries, there are no strict protections that require owners of apartments in these buildings to preserve the ornate interiors and features of their apartments. In fact, most protections are limited to a building’s street-facing exterior and common areas. Tsarist buildings are typically low-rise with three to five floors, with some featuring an additional floor or two added to the top of the buildings. Apartments generally feature high ceilings, large windows, thick walls and spacious living areas. Stalinist buildings (or “Stalinkas”) were built in the 1920s to the 1950s. Stalinkas can be taller than Tsarist buildings and apartments tend to be slightly smaller, while ceilings can be almost as high. While these buildings lack the ornate architectural features of Tsarist buildings, they are solidly built with spacious common areas and apartments.

What is the current condition of these buildings? After WWII, some Tsarist buildings were partially reconstructed and now feature concrete floors along with partially updated heating, water and sewage systems. However, many Tsarist buildings were not reconstructed and apartments still have old water systems, sewage lines, heating systems, no ventilation and floors with the original wooden floor beams. Other old Kyiv buildings have fallen into disrepair or stand derelict, often due to legal issues and protracted ownership disputes.

Many apartments in Kyiv’s historical buildings were received through post-Soviet privatization or otherwise acquired during the early years of Ukraine’s independence. Typically these apartments have two types of owners: elderly pensioners who lack the financial means to renovate their apartments, or long-time owners who renovated their properties more than a decade ago and are now unwilling or unable to refurbish them to make them suitable for modern living.

Another factor contributing to underinvestment in Kyiv’s historical buildings is the strong preference among Ukrainians to buy apartments in new buildings or even to move outside Kyiv to the suburbs. Many local homebuyers are also discouraged by the real and perceived challenges of renovating apartments in older buildings. Such projects often require technical skills and planning beyond the experience of many contractors, who would much prefer to renovate an apartment in a new building. Moreover, without proper planning before renovating an apartment in an historical building, such projects have a tendency to go over budget and off schedule.

Ukraine’s real estate laws and regulations create disincentives to investing in Kyiv’s historical apartment buildings. Unlike in many other markets, carrying costs for Ukrainian property owners are small to non-existent, making it easy to hang on to properties for extended periods. Property taxes are currently insignificant, communal charges remain quite low (although are now rising with increasing energy tariffs), and owners typically don’t pay mortgages since they received their property during privatization or purchased long ago. As a result, current owners have relatively little incentive to invest in or sell their properties. Meanwhile, the Kyiv authorities lack the legal tools necessary to force the sale of derelict buildings that are currently subject to disputes among multiple owners, leaving these buildings undeveloped.

Ukrainian legislation has established punitive “anti-speculation” taxes for owners who sell their properties after holding them for less than three years, or those who sell more than one property in a calendar year. For example, the income tax on real estate sales for foreign non-residents is 18% if the real estate is sold within one year of purchase, and 5% if sold one to three years after purchase. For Ukrainian residents, the tax is 5% if a property is sold within three years of purchase. Such taxes put the brakes on investment in a very real sense. Not all property investors wish to be long-term landlords or run AirBnB properties for several years. Instead, many investors wish to get in, exit quickly, and move on to their next investment. In the US, some call this strategy BRRRR investment which stands for “buy, rehab, rent, refinance, and repeat”. There are legal strategies to mitigate the impact of Ukraine’s anti-speculation taxes on real estate investment, but these strategies entail higher overhead costs for investors, making them potentially unattractive for some smaller investors.

How to Encourage Investment

Many other countries offer interesting incentives to stimulate real estate investment and encourage renovation of historical downtown locations. For example, real estate investors in the United States can take advantage of something called a 1031 exchange. The most popular form of a 1031 exchange is called a delayed like-kind exchange where the exchanger relinquishes the original property before he acquires a replacement property. The property the exchanger owns is transferred before the target property is acquired. The exchanger has to market his property, find a buyer, and execute a sale. Then the proceeds are held in trust by a third party intermediary and the exchanger has up to 180 days to acquire a replacement property. In this way, an investor is able to reinvest their capital gains and defer taxes to the future. In addition to the benefits of tax deferment, a 1031 can also allow a property investor to shift the focus of their investments. For example, from a high-maintenance to a low-maintenance property, or from one location to another location.

In Ukraine, a structure similar to a 1031 exchange would allow investors to harvest capital gains from properties that they have redeveloped, then reinvest these gains in new investments while deferring taxes on their gains.  For example, as prices rise in downtown Kyiv, an investor could redeploy capital opportunistically to areas near the center as prosperity spreads outward. Creating incentives that would allow such investors to pay the lower 1% income tax on total sale proceeds if they were to hold their properties for a required amount of time would keep this investment capital within Ukraine and help rebuild Kyiv’s housing stock. Introducing such progressive legislation in Ukraine would also attract restless BRRRR-type investors who wish to invest, rehabilitate their properties, and quickly move on to their next investment, thus unlocking investment capital from all over the world.

Ukraine’s current property laws and regulations have contributed to the chronic neglect of apartments in Kyiv’s historical buildings, leading to an underdeveloped downtown area that is far from realizing its potential. While it may have become a dirty word in other countries, Kyiv could do with a little gentrification to tidy up its historical center and modernize this housing stock. A fully renovated downtown area would stimulate the economy and offer residents the benefits of smart urban living, while also preserving the character of Kyiv’s historical architecture. Changing the status quo will require coordinated action and political will. However, we only have to look at what Ukraine’s green tariffs have done to stimulate investment in wind and solar power to see the potential of measures designed to encourage gentrification.

(Please note that this is article not intended to replace qualified legal advice, but instead to introduce readers to common legal issues for foreign real estate investors in Ukraine.)

About the author: Tim Louzonis (This email address is being protected from spambots. You need JavaScript enabled to view it.) is a co-founder of AIM Realty Kiev and AIM Realty Lviv, real estate agencies that specialize in real estate for foreign investors and expats. Tim is a long-time expat with Ukrainian roots; he first came to Ukraine as an exchange student in 1993 and returned in 2008.