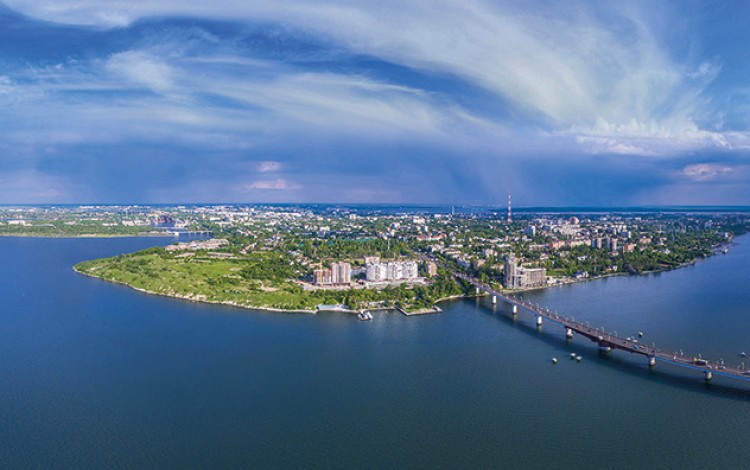 Mykolaiv was formerly home to the headquarters of the Russian Imperial Navy and a key Soviet shopbuilding center. Today it is better known as the international gateway to Ukraine's breadbasket agricultural wealth
Business Ukraine magazine

For the coming decades, much of Ukraine’s economic prosperity will depend on the vast grain shipments flowing out across the Black Sea to feed the growing global population. Europe’s breadbasket has become the world’s breadbasket, and the gateway is Mykolaiv. More grain and agricultural produce leaves Ukraine via Mykolaiv than any other port. This is hardly surprisingly – the city’s excellent riverside facilities and inland location close to Ukraine’s black earth heartlands make it ideal as a point of departure for agricultural exports.

These advantages have already attracted considerable international investment to Mykolaiv region. In the past few years alone, some of the world’s largest agricultural groups from America and China have invested hundreds of millions of dollars into Mykolaiv riverside infrastructure, making it the FDI capital of a nation desperately seeking greater flows of international financing. The arrival of such large-scale infrastructure investments has cemented Mykolaiv’s hold on Ukraine’s agricultural export market, serving to guarantee the city’s importance to the wider Ukrainian economy as the country undergoes the shocks of a belated transition away from the inbuilt inefficiencies of the Soviet inheritance. Alongside the agricultural export sector, Mykolaiv has also attracted a number of major international investors in related sectors including America’s Pepsi and French dairy giant Lactalis.

While Mykolaiv blossoms as a key player in Ukraine’s agricultural industry, the city’s historic role as a shipbuilding center has slipped into the shadows. The colossal shipyards that line the riverside are now ghostly quiet, their hulking cranes standing like museum relics of an antediluvian age. Shipbuilding continues in the city, with a new emphasis on luxury yachts. However, these oligarch playthings are mere novelties compared to the days when Mykolaiv produced mammoths like the much-mocked Admiral Kuznetzov, the Soviet Union’s sole aircraft carrier that provoked an outpouring of global mirth in 2016 with its smoke-belching limp towards Syria.

The decline of the shipbuilding business has hurt Mykolaiv’s pride and its pocket, but the subsidiary sectors of the industry remain very much part of the local economy. The city’s academic sector still focuses heavily on nautical themes, with a number of specialized schools and thousands of graduates offering engineering and design expertize at virtually unbeatable prices. This has helped fuel the growth of an outsourcing market, with international shipbuilding groups looking to tap into the Mykolaiv brain trust and benefit from some of the most highly trained and experienced professionals in the whole of Eastern Europe.

Mykolaiv has strong ties to the Russian imperial and Soviet past, having served as the headquarters of the tsarist navy before becoming a closed Soviet city and center of strategic military shipbuilding during the communist era. This heritage, together with a tradition of large industrial enterprises and imperial nostalgia, has led to perceptions of Mykolaiv as a city sympathetic towards the Soviet past and inclined to favor pro-Russian sentiments. This made the autumn 2015 election of thirty-something Western-leaning IT entrepreneur Oleksandr Senkevych as Mykolaiv Mayor particularly surprising. Mayor Senkevych’s victory came following an innovative campaign driven by flash mobs and social media that sought to mobilize the city’s considerable youth vote in favor of change and modernization. Many observers saw it as one of the first manifestations of the progressive Maidan spirit in Ukraine’s more politically conservative Russian-speaking southern cities.

Since his election, Mayor Senkevych has faced the challenge of working with local authorities drawn largely from the old guard and often openly hostile to his reformist agenda. This has made an already difficult task considerably more daunting. Nevertheless, the momentum generated by his 2015 election triumph has helped Mayor Senkevych mobilize support at both the local activist level and among national and international allies. Many of Ukraine’s international partners currently regard Mykolaiv as the litmus test for the country’s ability to achieve a decisive break from the Soviet past and reinvent itself along European lines.

Despite boasting reform-minded local authorities and a range of natural advantages, Mykolaiv faces serious obstacles as it seeks to lead the southern Ukraine region out of the post-Soviet economic malaise. The city stands on numerous major European transport routes, but the dire condition of local roads stops it from taking full advantage of this geographical asset. Likewise, the absence of an international airport and efficient rail links prevents easy access and dampens the enthusiasm of visiting delegations. The usual ailments also abound. Like all Ukrainian cities, Mykolaiv struggles with corruption and inefficient bureaucracy. The most striking difference about this southern Ukrainian port is the apparent willingness to address these problems in a frank and direct manner.

The big question now is whether the new brooms brought in by Mayor Senkevych will succeed in sweeping Mykolaiv clean. Can they overcome the opposition of the old guard and prevent a return to the political passivity of the past? Concrete results are urgently required in order to maintain the fading momentum generated by the 2015 mayoral election. Policymakers in Kyiv, Brussels, and Washington DC will be watching developments in Mykolaiv as a bellwether for Ukraine’s broader transformation. There are considerable hopes that the city can serve as a model for regional reforms, but failure will fuel a wider sense of Ukraine fatigue that could undermine enthusiasm for further international support.