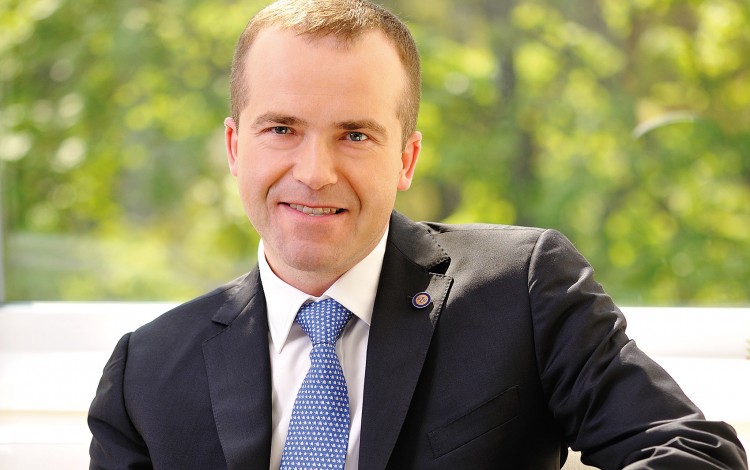 About the interviewee: Maciej Szyszko is the President and CEO of PZU in Ukraine
Business Ukraine magazine

Ukraine’s economy has been through a turbulent period over the past three years of revolution and war, but Polish insurance giant PZU is not merely surviving – the company is thriving thanks to a heightened desire among Ukrainian customers for greater financial security. Turnover is expected to reach UAH 1.3 billion in 2016, representing a 30% increase on 2015. PZU’s President and CEO in Ukraine Maciej Szyszko explains this robust performance as a reflection of the Ukrainian desire for greater reliability in troubled times. “The crisis actually helps us. The insurance business is all about trust,” he says, pointing out that PZU’s Ukrainian subsidiary experienced similar growth patterns among both private and corporate clientele at the height of the 2008 credit crunch crisis.

Maciej first took up his post in Kyiv ten years ago and has witnessed the growth of the Ukrainian insurance industry from fledgling status. He arrived soon after PZU established a presence in the country, and has overseen the company’s steady expansion from his base in the Ukrainian capital. PZU currently has a network of over 100 offices across Ukraine, employing more than 700 staff. “We arrived during the very early stages of the Ukrainian insurance industry. Ten years ago, only a few hundred people had home insurance. Today there are millions,” he reflects. Part of the challenge has been changing public attitudes towards insurance. “It is important to explain that insurance is actually useful and not just something you must have in order show to the authorities. Step by step, we are building up trust in the insurance industry.”

Being part of one of Central and Eastern Europe’s leading insurance groups certainly helps. PZU has a two hundred year corporate history, with annual turnover in Poland currently topping the EUR 5 billion mark. The company’s Ukrainian branch operates on a significantly more modest financial scale, but it is self-sufficient. “We are relatively small compared to PZU’s Polish presence, but we produce positive results,” says Mr. Szyszko.

Like many major Polish investments in Ukraine, PZU management see the company’s growing market presence in the Poland’s eastern neighbor as a strategic asset with attractive long-term potential. One area that could significantly boost this potential is pension reform. Maciej says this could serve to broaden the scope of PZU’s activities in Ukraine, enabling the company to expand pension and life insurance services, but he admits to frustrations over repeated delays in the process. “The government has been talking about pension reform for the past ten years. Now they say it will begin next year. But this has been the mantra for some time, and ‘next year’ never seems to arrive. Meanwhile, we continue to prepare for future changes and remain convinced that the idea is still very much alive. PZU prides itself on the company’s ability to address changes in the business environment and legislative framework in the best way possible way for all concerned. ”

Many economic analysts see Poland’s post-Cold War transition as the ideal model for today’s Ukraine to adopt, but Mr. Szyszko says he is cautious of any attempts to transplant the lessons of the early post-Soviet years directly into the contemporary Ukrainian environment. “2016 is completely different to the 1990s. The adoption of insurance culture is much faster today. Our Ukrainian customers are far better informed. They often have detailed knowledge of the industry and are very demanding consumers – often more so than in many mature West European markets. As a result, the quality of some of our products is actually higher in Ukraine than in Poland.”

In line with the majority of Western executives operating in Ukraine, Maciej identifies corruption as the single biggest barrier to further market growth, particularly in the business insurance sector. “Corruption keeps the market small,” he says. “It could be a big market but huge improvements are necessary. At present, it is not so much a risk-based market as a bribe-based market. That is the reality.” Nevertheless, Mr. Szyszko sees opportunities for growth in a range of sectors. “Cyber risk is a segment where Ukraine is already ahead of general market development trends. The transportation, infrastructure, and agriculture sectors also offer potential for strong growth.”

The nature of PZU’s business necessarily means a long-term commitment to the Ukrainian market. After a decade of steady progress in Ukraine, Mr. Szyszko is undaunted by this long-term vision. His informed optimism is hardly surprisingly, given PZU’s ability to achieve growth during two of the most intense crises in the country’s independent history. “On a fundamental level, Ukraine has very positive perspectives,” he says. “Ultimately, it is all about the strong potential of the people. This applies equally to our company and our clients.”