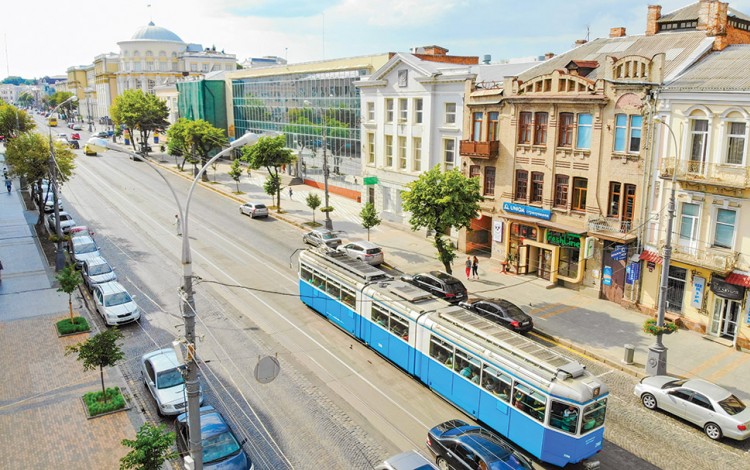 Located two hours southwest of Kyiv by train, Vinnytsia is one of Ukraine’s smaller oblast centers, but it punches well above its weight when it comes to attracting both domestic and international investment
Michael Druckman

Over the past several years, the International Republican Institute (IRI) in Ukraine has been able to monitor the impact of the country’s landmark 2015 decentralization reforms by using its Nationwide Municipal Survey tool. IRI’s survey is the largest regularly conducted poll in Ukraine, drawing from a sample of more than 19,000 residents of 24 cities across Ukraine, including Mariupol and Severodonetsk in the Donbas region. The poll asks a wide spectrum of questions on everything from city services to how citizens view their educational facilities. It covers instances of local corruption, public safety, and citizen observations on both national and local government institutions and officials.

Over the past four years, the city of Vinnytsia has consistently stood out. In survey after survey, Vinnytsia has taken top slot among Ukraine’s 24 oblast centers. What is most noteworthy, however, is that Vinnytsia does not just score well in a specific municipal service or public perception, but rather across multiple sectors and indicators in the survey.

The main aggregated score in IRI’s annual Nationwide Municipal Survey is on service delivery, which consists of 22 separate service scorecards in each city. These include everything from streetlights and road conditions to educational and medical facilities. In the most recent survey conducted in 2018, Vinnytsia scored 3.6 out of a possible five, almost 10% ahead of second-placed Lutsk.

To be fair, it is important to recognize that Vinnytsia received a head start thanks to the reforms that then-Mayor Volodymyr Groysman independently implemented during his term in charge of the city prior to the 2013-14 Euromaidan Revolution. These reforms helped Vinnytsia stand out during the 2010-2014 Yanukovych administration as one of the few bright spots of democratic development in Ukraine at that time. Several Ukrainian cities including Lviv and Cherkasy subsequently mirrored the reforms championed under Mayor Groysman, but it was not until the post-Euromaidan reforms on local governance in 2015 that the decentralization of power in Ukraine towards municipalities got underway. This gave Ukrainian cities the opportunity to implement reforms on a far more comprehensive level.

Building on the city’s groundbreaking reform of its public transportation system (making it one of the most modern and efficient in Ukraine through the use of e-ticketing among other innovations), Vinnytsia also led the country in the creation of Administrative Service Centers, a “one-stop shop” for municipal services that houses previously disparate departments and officials under a single glass-encased roof. Following Mayor Groysman’s elevation to Speaker of the Ukrainian Parliament in 2014 (and subsequently to the post of Prime Minister), his former deputy Serhiy Morhunov won election as mayor. He has maintained the reform-driven agenda established by his predecessor.

In terms of attitudes among local populations regarding the direction their cities are moving in, residents of Vinnytsia are some of the most optimistic in the country, with 65 percent of residents in 2018 saying things in their city were going in the right direction, compared to only 38 percent on average nationally. Moreover, this optimism also extends to the national outlook of local citizens. Although the average at the time for those reporting that Ukraine was heading in the right direction was only 16 percent, 24 percent of Vinnytsia’s respondents said things were on the right track.

When it comes to perceptions of corruption, Vinnytsia once more stands apart from most of its peer cities, with residents feeling that corruption is not the primary obstacle that prevents business from coming to their city. Only 25 percent of Vinnytsia’s residents say that local corruption prevents businesses from coming to their city, while the 24-city average for Ukraine is almost double this at 47 percent. Instead, 42 percent of Vinnytsia respondents identified a lack of investment funds as the primary issue.

Finally, the residents of Vinnytsia feel that local authorities treat them well when it comes to interaction with city officials for municipal services. Almost a quarter of Vinnytsia residents reported being treated in an “excellent” manner by the local authorities, surpassing fellow cities by a considerable distance. Meanwhile, only 8 percent said they were treated poorly, also significantly below the 24-city national average.

Based on the results of IRI surveys covering the entire country, Vinnytsia is clearly one of Ukraine’s most optimistic, transparent and well-governed cities. IRI will be heading back into the field this autumn for its 2019 Nationwide Municipal Survey. While we expect to see many changes given the tectonic shifts in national politics that have taken place this year, we can be reasonably confident that Vinnytsia will continue to be one of the exemplary cities and a place that leads by example when it comes to deepening good governance practices in today’s Ukraine.

About the author: Michael Druckman is Ukraine Country Director at the International Republican Institute