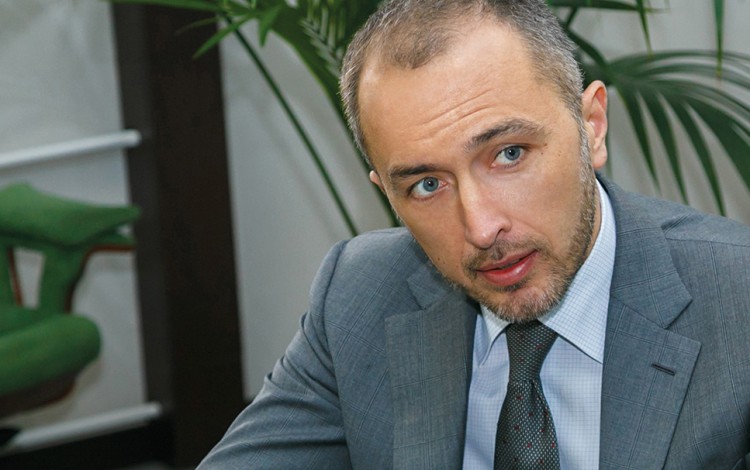 About the interviewee: Andriy Pyshnyy is Chairman of the Management Board of Oschadbank
Business Ukraine magazine

When Andriy Pyshnyy became Chairman of the Management Board at Ukraine’s largest state bank in spring 2014, the nation was in a perilous position. The Kremlin had seized control of Crimea and a Russian hybrid invasion was rapidly unfolding in the eastern border regions of mainland Ukraine. Many people in his position would have identified mere survival as the immediate priority for the bank, but Mr. Pyshnyy recognized that Oschadbank needed to play a leading role in the national transformation that held the key to securing continued Ukrainian independence. What followed was an internal revolution designed to change the way the bank saw itself, while reenergizing the manner in which it interacted with its millions of Ukrainian customers.

Three years on, Oschadbank has done much to shake off its Soviet shadow. Despite a late start, it has emerged among the leaders as Ukrainian banks rush to embrace digital banking. There has been a complete rethink of the bank’s business model, with a range of innovative new services and industry novelties such as inclusive branches catering for the physically challenged. Oschadbank has also broadened its horizons. The new-look bank has won international acclaim for its ambitious rebranding efforts, and is currently developing strategically crucial cooperation with the European Bank for Reconstruction and Development (EBRD).

Back in early 2014 when he first took over at Oschadbank, one of Mr. Pyshnyy’s initial priorities was to communicate the bank’s new philosophy to all 32,000 employees across the country. However, this proved easier said than done. “I sent a group email out to all Oschadbank staff members and was puzzled when I did not receive any replies. Eventually I contacted the IT department and learned that there was actually no mechanism in place to facilitate direct communication between the Chairman of the Management Board and employees,” he recalls. “It took the IT team three days to send the letter out to everyone. Now every member of staff can send me an email directly.”

This is just one example of the changing corporate culture that is transforming Oschadbank from a symbol of Soviet stagnation into a flagship for the changes taking place in post-Euromaidan Ukraine. There has also been a conscious effort to improve face-to-face interaction with the regions. “We found ourselves with lots to do and little time, so we quickly removed unnecessary barriers to direct contact,” says My Pyshnyy. “Together with my senior management team, I began visiting regional branches. It might surprise you to learn that in Chernihiv, for example, the last visit from the bank’s Chairman was in 1948. This is a city just 160km from Kyiv! These visits proved a crucial tool in helping our nationwide team to understand our vision for the development of the bank.”

Meanwhile, at the bank’s Kyiv headquarters, which are perched elegantly on the slopes overlooking the Olympic Stadium, pop art posters and striking photographic prints from Ukraine’s 2013-14 Revolution of Dignity adorn the walls of corridors and meeting rooms. The building’s large basement area was once an extravagant sauna complex reserved exclusively for senior management. It is now a fresh and funky cafeteria serving the bank’s hundreds of HQ employees. This open-plan cafeteria features murals that would not look out of place in the offices of an independent IT startup. It is all a very long way away from the staid stereotypes associated with traditional Ukrainian state-owned companies. When talking to Mr. Pyshnyy, it soon becomes clear that this is exactly the point.

Flagship for the New Ukraine

“When we began our work, the first task was to rethink our entire philosophy,” Mr. Pyshnyy says. A key early benchmark in this process was the creation a definitive manifesto to highlight the values that would serve as a point of reference for the bank’s future direction. Among other things, these declarations identify Oschadbank as ‘a national bank for the nation’ and ‘a changing bank that leads change.’ The manifesto is currently on display at every one of the bank’s more than 3,500 branches across Ukraine, serving as a statement of intent as the entire Oschadbank team joins the transition process first initiated in spring 2014.

The bank also has a new slogan. “My Bank, My Country” has replaced the vaguely sinister “Always Close”. Branded materials, including everything from branch interiors to banking cards, have received a completely new look. Designs now incorporate national elements such as Ukraine’s distinctive vyshyvanka embroidery patterns. The aesthetic is young, stylish, and self-confident. Some of it would not look out of place in a contemporary art gallery.

This rebranding process has played a crucial part in the repositioning of Oschadbank. It has also won the bank considerable plaudits at home and abroad. Ukrainian branding agency Fedoriv received a prestigious Red Dot award in November 2016 for the Oschadbank rebranding campaign, making it one of relatively few Ukrainian marketing efforts to achieve such high-level international recognition.

While international branding awards are no doubt welcome, the changes at the bank run far deeper than fashionable business school buzzwords and clever packaging. To illustrate this point, Mr. Pyshnyy reels off a long list of areas where the bank has radically improved its market position over the past three years. Oschadbank has moved from eighth to second place nationally in terms of salary payment accounts – with private sector companies including multinationals like McDonald’s and Turkish Airlines making up fifty percent of clients. The bank is also now in the number two spot for internet and mobile banking, with 1.6 million users. Fifty percent of all the bank’s transactions are now via remote channels, compared to just twenty-two percent in 2014. Special new Oschadbank pension cards offer convenience to pension-age account holders, while the bank is also at the forefront of smartphone banking and cashless transactions in Ukraine. Due to cooperation between Oschadbank and Mastercard, all cardholders can swipe their cards to travel on the Kyiv metro (with thirty thousand on average doing so daily), while the bank has teamed up with Velyka Kyshenya supermarket chain to install Ukraine’s first self-service checkouts.

The new-look Oschadbank has introduced a new concept to Ukrainian retail banking – branches designed specifically for physically challenged customers. Based on World Health Organization recommendations, these “Inclusive Branches” are accessible for wheelchair users and come with features such as lowered counters and speaking cash machines for the visually impaired, as well as staff trained in sign language and other areas of disability awareness.

The first Inclusive Branch, located close to Kyiv’s Ukraine Palace concert hall, opened to the public in late 2014. It was supposed to be a pilot project that would allow Oschadbank officials to test the concept. However, it soon became clear that there was significant – and growing – demand for such services. “With more and more veterans returning from the conflict zone with missing limbs and other disabilities, we decided that we simply had to expand this program across Ukraine. There are now 14 Oschadbank branches across the country fully accessible for  disabled customers,” explains Mr. Pyshnyy.

He believes this innovative approach can have an impact on attitudes towards disability throughout Ukrainian society, and sees it as one of the ways the bank can contribute to the country’s development. “By taking into consideration the challenges facing those with physical disabilities, we are helping to change the psychology of society. I would like to see a similar approach adopted by other state services such as the railways, post office and metro system. At present, it seems like we are taking a lead in areas where others have an obligation to set an example.”

Not all branches of Oschadbank have yet undergone complete renovations. With 3,600 branches across the country, the bank has an unrivalled nationwide infrastructure, making a total overhaul a Herculean task. Over 500 of these branches are new additions to the network offering the bank’s new format. This includes new staff, new technologies, new services, and an entirely new business model. There has also been a rationalization of existing branches, with underperforming locations closed down and new branches opened where most needed.

Meanwhile, the ongoing hybrid conflict with Russia has meant considerable material losses for the state-owned bank. Oschadbank lost 300 branches due to the Russian takeover of Crimea, and has been cut off from a further 400 branches situated in the occupied areas of Donetsk and Luhansk oblasts. Conflict zone maps covered in pins decorate one of the bank’s conference rooms, lending it the ambience of a military headquarters. “Every day we were monitoring the developments at the front because we constantly had to evacuate personnel,” recalls Mr. Pyshnyy. Near to the maps, an improbably tall tower of stacked cardboard boxes reaches up to head height. “Those boxes contain the claims we have filed against the Russian Federation for the bank’s losses in Crimea. The total damages claimed amount to more than USD one billion,” he says.

As Ukraine’s largest nationwide bank with over 20 million customers, Oschadbank has had to adapt its everyday operations to the current conflict conditions in the east of the country. As well as evacuating employees, there have also been efforts to provide banking services for those living close to the conflict zone. An armored vehicle modified by the bank now traverses frontline towns. This Oschadbank innovation offers secure access to a cash machine and two fully functioning counters.

Mr. Pyshnyy’s reinvention of the Oschadbank brand received a significant vote of confidence in November 2016 with the signing of a Memorandum of Understanding between the bank, the Ukrainian Finance Ministry, and the European Bank for Reconstruction and Development (EBRD). The memorandum pledges EBRD support for Oschadbank as it continues to implement the current development program, with the aim of further commercialization and partial privatization by 2018. According to EBRD officials, their engagement may also result in the EBRD making an equity investment in Oschadbank.

The memorandum was the product of more than two years of talks between bank representatives and EBRD officials. It has cemented Oschadbank’s position as a key player in the reform of the Ukrainian banking sector, while helping to lay the groundwork for a future reduction in the state’s currently dominant role in the industry. “Our cooperation with the EBRD is based on synergies,” says Mr. Pyshnyy. “Oschadbank has demonstrated its leadership potential over the past two and a half years. We have declared our readiness to compete, not just on a level playing field with the best banks on the market, but also in new segments such as internet and digital banking. The signing of the memorandum with the EBRD is a positive verdict on our development strategy that reflects the bank’s performance since 2014.”

The developments at Oschadbank over the past three years are in many ways a model for the kind of wholesale change envisioned during Ukraine’s 2013-14 Revolution of Dignity. Although still a work in progress, the bank has already managed to shift perceptions and shed much of its Soviet baggage. This has proved doable despite inheriting exactly the kind of lumbering corporate culture and outdated business model that skeptics typically dismiss as beyond reform.

The wider historic importance of this process has not been lost on Mr. Pyshnyy, who is well aware of the high stakes involved. “There are not enough transition success stories in today’s Ukraine,” he says. “When a brand as big as Oschadbank is able to achieve massive and meaningful change, it sends out a signal to society that such transformations are possible. Everybody used to think of Oschadbank as a dinosaur with no real potential, but the results of our work prove otherwise. I would like to think that our success is something all Ukrainians can be proud of.”