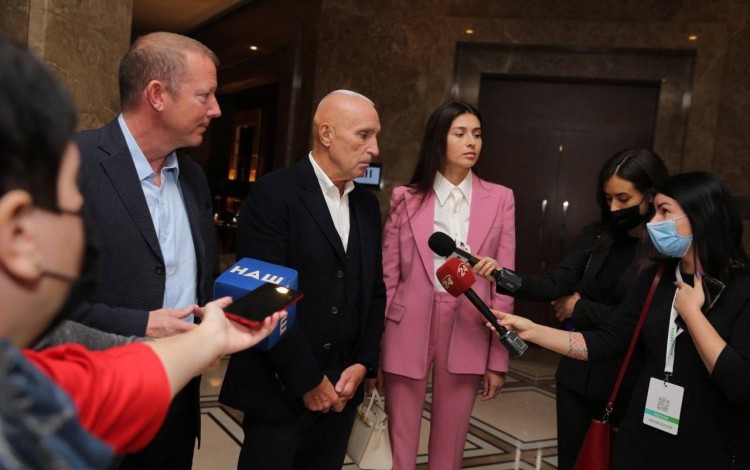 Nathaniel Rothschild has announced his readiness to invest in DCH Group President Oleksandr Yaroslavsky’s Ecopolis HTZ high-tech business park project in Kharkiv. Speaking at the “Kharkiv: Development and Investments” business forum in Ukraine’s second city in early October, Rothschild expressed his interest in Ecopolis HTZ project, which is currently one of the key priorities of the Kharkiv Development Strategy and aims to serve as a “Ukrainian Silicon Valley.”

During his address to forum participants in Kharkiv, Rothschild underlined the role of personal relationships in the development of successful investment partnerships and stressed his longstanding cooperation with Yaroslavsky.

“It’s all about partners, the people with whom you do business,” commented Rothschild. “We have been doing business with DCH for the past fifteen years and have an ideal business relationship [with Yaroslavsky]. He is extremely honest and an impeccable ambassador of Ukraine. Thanks to him, I am here to look at Kharkiv as a place for potential investments.”

Yaroslavsky thanked his guest for visiting Kharkiv and welcomed Rothschild’s interest in the investment opportunities created by the Ecopolis HTZ initiative. “We talked for half the night about this project [Ecopolis HTZ], and he expressed a desire not only to consult but also to offer his knowledge and his ties,” commented Yaroslavsky. “This involvement will serve as a solid driver for the project.”

In addition to the Ecopolis HTZ project, Yaroslavsky told reporters the two men had also discussed other opportunities for future investment cooperation in Kharkiv. Potential projects include the construction of a major new shopping mall close to the city’s Metalist Stadium.

“Kharkiv is lucky that Nathaniel Rothschild has come here to see everything for himself,” commented Yaroslavsky. “It is not the first time he has visited the city, but the last trip was more than ten years ago. I am personally grateful to him and am sure that together we can implement serious projects honestly and profitably for the city and its residents.”

Ecopolis HTZ Business Park will be located in the vacant production areas of the city’s famed Kharkiv Tractor Plant. The existing production complex of the plant will serve as an anchor resident for a planned park covering around 150 hectares and featuring 500,000 square meters of office space, warehouses, industrial, educational, and research facilities.

The project envisages investments of around USD 1 billion until 2033 and the creation of around 10,000 new work places. Once operational, Ecopolis HTZ will include an industrial park, technology park (featuring IT and R&D clusters), a logistics complex with e-commerce distribution center, agro-tech and trade clusters, and medical and educational centers.

The Ecopolis HTZ project is set to become Oleksandr Yaroslavsky’s latest major investment in Kharkiv. He famously emerged as the largest private investor in Ukraine’s preparations to host the Euro 2012 football championship when he financed comprehensive upgrades of the city’s airport, stadium, and other key infrastructure. Throughout his career, he is believed to have invested over USD 1 billion in the development of Kharkiv and Kharkiv region.