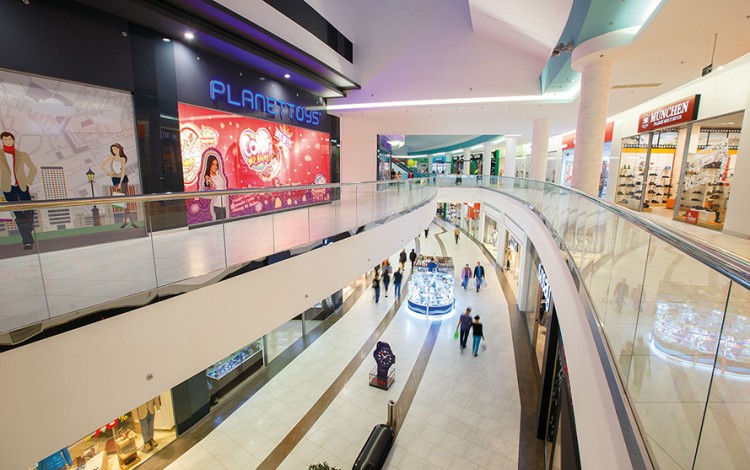 After two years of steep decline, the Ukrainian economy is finally beginning to show signs of recovery. Key indicators such as GDP are returning to positive territory, while the street-level situation also suggests that Ukraine is now entering a period of modest economic growth. The commercial real estate market is among the many sectors showing discreet signs of recovery.

From market freeze to thaw

Many of the shopping malls that were in the pipeline when the current economic crisis began in late 2013 are finally expected to open their doors for business in 2016. After two years of relative inertia, almost half a million square meters of shopping space is scheduled to open in 2016, with a similar amount expected to hit the market in 2017. According to retail sector research conducted by Colliers International, at the end of 2015, the total amount of quality retail space in Kyiv per thousand residents was 368 square meters (SQM). This total is significantly lower than comparative figures for neighbouring regional capital cities such as Bucharest (441 SQM), Budapest (564 SQM) and Warsaw (623 SQM).

These unfavorable comparisons are hardly surprising given the economic difficulties Ukraine has faced over the past two-and-a-half years. The existential crisis sparked by the Euromaidan protests and subsequent Russian military intervention in Crimea and east Ukraine has seen household incomes plummet throughout Ukraine, reducing the consumer spending power needed to fuel the retail sector. This slump has been accompanied by a sharp drop in the value of the Ukrainian national currency, the hryvnia, along with galloping inflation. In other words, retailers and commercial real estate developers active on the Ukrainian market have found themselves confronted by a perfect storm of negative conditions. Many developers reacted to these uniquely unfavourable market conditions by halting new commercial real estate projects. Unsurprisingly, 2015 saw a record low number of shopping malls enter the Kyiv market.

Despite these bleak market conditions, Ukraine’s formerly robust retail industry has proved remarkably resilient. Even the most severe of economic crises cannot last forever, and the first signs of a fledgling recovery in the retail sector were already becoming evident in the second half of 2015. According to data from German market research institute GfK, the relative stabilization of the hryvnia in the second part of the year played a major role in boosting consumer confidence. This led to a rise in spending, which in turn enabled retailers to stabilize turnovers in hryvnia terms. This moderate recovery, following the shocks of 2014 an early 2015, resulted in rising occupancy. Shopping mall vacancy rates in the Ukrainian capital at the end of 2015 stood at 5%, down from a high of 7.3% at the end of the previous year. Arricano Real Estate Chief Marketing Officer Nataliya Dmytrenko confirms this upward trend in occupancy. She points to the experience of Prospekt Shopping Mall, which opened at the end of 2014 at the very peak of the market turbulence. During 2015, the mall’s retail occupancy rate rose 20%, climbing from 73% to 93%.

Made in Ukraine: recipe for retail success

One of the most visible impacts of the Ukrainian retail sector malaise has been the lack of new stores from major international retail brands. Many of the biggest global retail brands have chosen to put Ukrainian expansion plans on ice, with far fewer new outlets opening in 2014 and 2015 than in previous years. Over the past eighteen months, the most active market players have been Turkish brands, with Colin’s and LC Waikiki particularly active. Meanwhile, consultants continue to work with at least two more Turkish retailers – Cotton and DeFacto – over Ukrainian market presence.

The biggest retail hit of the past year has undoubtedly been the trend towards ‘Made in Ukraine’ products of all shapes and sizes. This is partly due to the competitive advantages enjoyed by Ukrainian manufacturers, who have benefited in relative terms from the devaluation of the currency and the reduction in labour costs. However, the popularity of locally made produce is also a symptom of the broader national awakening that has accompanied the Euromaidan Revolution, and the mood of national resistance to Russia’s hybrid war. Buying Ukrainian goods has become an expression of patriotism and a symbol of national pride at a time when many previously apolitical Ukrainians are embracing their national identity for the first time. Demand for Ukrainian goods has led to a rising number of outlets springing up throughout the Ukrainian retail sector, with many designed specifically to cater to this emerging market. Ukrainian designer Andre Tan has been one of many fashion industry professionals to capitalize on public hunger for ‘Made in Ukraine’ labels. He currently has 20 outlets across Ukraine, with plans to open a further 20 over the coming year. “Lately it has become fashionable to buy items by Ukrainian designers,” says Tan. “When a customer has to choose between a Chinese or Ukrainian dress, they now tend to opt for the Ukrainian manufacturer. In the past, it was the other way round.”

Ukrainian menswear brand Arber has experienced similar growth over the past year. As a result, Arber General Director Vadym Zolotarevskiy says the brand plans to expand from the current total of 120 stores to 470 stores by 2020. The passion for Ukrainian fashions has also led to the appearance of entire department stores located inside a range of shopping malls and leisure complexes. Specialist department stores like Names UA, UDress, and UA Made all trade on the current credibility of Ukrainian designers and offer a platform for both well-established brands and emerging Ukrainian fashion talent.

The current year will witness an array of new arrivals on the Ukrainian commercial real estate market. According to Colliers, there is about 749,000 SQM of retail space under construction in the Ukrainian capital. As the political and economic situation continues to stabilize, projects frozen in 2014 will be the first to hit the market. Major projects scheduled for completion in 2016 include Kyiv’s Lavina Mall (180,000 SQM) and Blockbuster Mall (240,000 SQM), Lviv’s Victoria Gardens (54,500 SQM), Evrobazar in Sumy (23,000 SQM), and Kharkiv’s Nikolskiy (52,000 SQM).

The flagship opening of the year will undoubtedly be the widely anticipated unveiling of the renovated TSUM complex in downtown Kyiv. This unveiling comes following years of reconstruction work that has seen the historic building virtually gutted, with only the façade remaining of the previous structure. The iconic TSUM building is a popular Kyiv landmark located on the city’s signature Khreschatyk Street, making its redevelopment a symbol of Ukraine’s retail sector recovery. The new-look TSUM complex is scheduled to open in August 2016, with many already dubbing it ‘the Ukrainian Harrods’ in anticipation of what is expected to be a sharp shift upmarket and away from the megastore’s proletarian past. TSUM Marketing Director Julia Pysmennaya says 70% of the retail space in the complex has already been leased. “Based on our experience, you could say that the situation on the Ukrainian retail market has stabilized and tenants have adapted to current market conditions. Some people have engaged in belt-tightening in terms of costs, size of network and procurement, while others have seen opportunities to develop,” she shares. “We can see from our clients that they have adapted to the new reality and are ready to move forward with their business. The occupancy rate of TSUM is developing according to plan and we expect to open with minimal vacancies.”

On 24-25 May, Kyiv will play host to the national ‘New Comers 2016 Forum’ for retail real estate industry professionals. The event promises to bring together executives from the construction, facility management and shopping mall side of the business along with their colleagues in the retail sector. Representatives of shopping malls including TSUM, Gagarin Plaza, Lavina Mall and Smart Mall have already confirmed their participation in the two-day forum. For further information, or to register for the event, please email Olga Solovei at This email address is being protected from spambots. You need JavaScript enabled to view it. or call +38067-6567681.