STEM CELL INNOVATION: From the Ukrainian battlefield to American hospitals 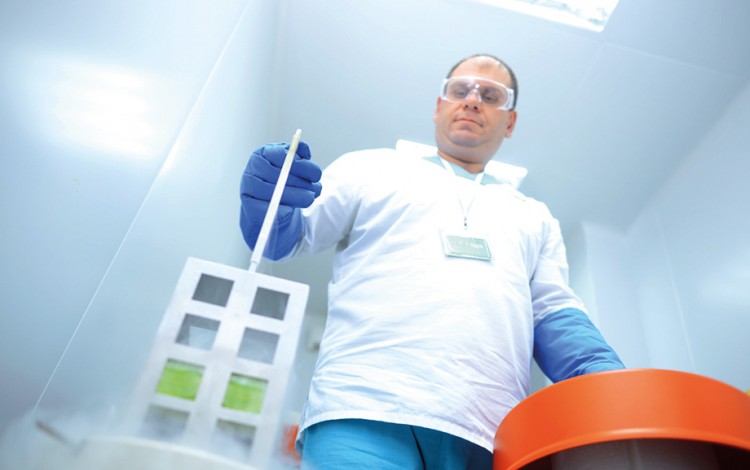 After using adult stem cells to treat soldiers wounded in the Donbas, a Ukrainian biotechnology company is raising funds to bring its innovative tissue regeneration technology to the US market. Ilaya Medical Company, based in Kyiv, has filed for US recognition of its patent for a method of cultivating stem cells in the laboratory and is starting discussions with the Food and Drug Administration, the main American medical regulator, seeking approval to use its method to treat avascular necrosis of the hip. About 20,000 Americans are diagnosed with the condition, known as AVN, each year. Ilaya’s treatment method, which the company has used to help wounded Ukrainian soldiers regrow bone tissue and avoid amputations, uses adult stem cells taken from the patient’s own body.

AVN is the death of bone tissue due to a lack of blood supply. Although the main cause is not well known, there are several risk factors including steroid medications, alcohol consumption, and smoking. At the moment there is no “gold standard” for treating AVN of the hip, says Dr Duran Yetkinler, Ilaya’s partner in the US venture. After lengthy palliative care, the majority of patients end up having hip replacement surgery, which typically costs USD 30,000 to USD 50,000 and can significantly reduce the patient’s mobility and thus, their quality of life. “The work by the Ukrainian team is remarkable and really gives us a leg up in the FDA approval process,” Dr Yetkinler says. “Because of the clinical work they’ve already done, we’re in a different position from somebody who just came up with an idea in the US and is starting from scratch. We have a better idea about how to approach the US clinical trials, which translates into a better chance of success.”

Before setting up the venture with Ilaya, Dr. Yetkinler, who holds MD and Ph.D. degrees, worked in medical technology in the US for more than two decades. His most recent position was a nine-year stint as president of Skeletal Kinetics, a producer of bone void filler cement.

Ilaya is in fundraising talks to build a laboratory in the US where it will also conduct clinical trials of the treatment method. “What we’re doing is taking a technology that’s been proven in a relatively little-known place and bringing it to the big stage,” says Dr. Yetkinler, who will apply his experience in working with the FDA in Ilaya’s bid to win approval for the technology.

Ilaya has honed its stem cell technology by working with soldiers wounded in the ongoing war against Russia’s hybrid army in Donbas. It has dozens of cases of successful treatment where soldiers who were told they would need amputations and prosthetics have been able to regrow bone tissue. A recent video from the company shows former patients running in a race in Kyiv.

Much of Ilaya’s work with the soldiers has been sponsored by People’s Project, an organization whose other work includes supplying Ukraine’s armed forces and volunteer battalions with items such as drones, materials to build fortifications, and equipment for snipers and military divers.

Ilaya’s patented technology is based on taking adult stem cells from the patient’s own body rather than the embryonic stem cells whose use in research is highly controversial. Ilaya then cultivates the cells in a laboratory before injecting them back into the patient – a process that allows the body to heal itself. Many of Ilaya’s military patients have had bones shattered by bullets or shrapnel. By implanting stem cells on a scaffolding between two ends of a broken bone, Ilaya’s doctors are able to regrow bone over gaps as wide as 15cm.

Ilaya was founded in 2011 as a fertility clinic specializing in difficult cases. Later, its medical and scientific staff began using stem cells to treat causes of infertility such as Asherman’s Syndrome. The company’s Ukraine-based biotechnology laboratory is run by Dmytro Zubov, a biologist with 16 patents to his name. “Unfortunately, in Ukraine we’ve had a lot of opportunities to learn about regeneration of bone tissue that has been damaged by trauma,” says Mr. Zubov. “So we hope some good can come out of it for people in the US who are suffering from AVN. In fact, when you think about history, it’s not unusual that technologies originally developed for the military, like radar or GPS, end up improving everybody’s life.”

Mr. Zubov and his team are already researching other applications of the company’s technology for orthopaedic conditions, and if the AVN treatment is successful in the US, Ilaya will explore opportunities to expand into other areas. In addition to AVN and trauma, such as the soldiers have suffered, potential applications of stem-cell-based tissue regeneration include spinal hernias (slipped discs) and joint replacements.

Vitaliy Kriukov, director of Ilaya’s international operations, says Ilaya’s technology will have effects far beyond the field of medicine because the majority of patients diagnosed with AVN of the hip end up having prosthetic joints implanted and can have difficulty walking for the rest of their lives. “We hope our technology will have a much broader effect in society,” he says. “Our technology has the potential to save millions of dollars each year in disability payments, improve people’s quality of life, and keep them in the workforce.”