Turkey has emerged in recent years as one of Ukraine’s key economic partners and a leading source of international investment. According to Turkish-Ukrainian Business Association Chairman Burak Pehlivan, this relationship is set to blossom further as the two countries continue to explore opportunities created by close geographical ties and highly complementary economies. 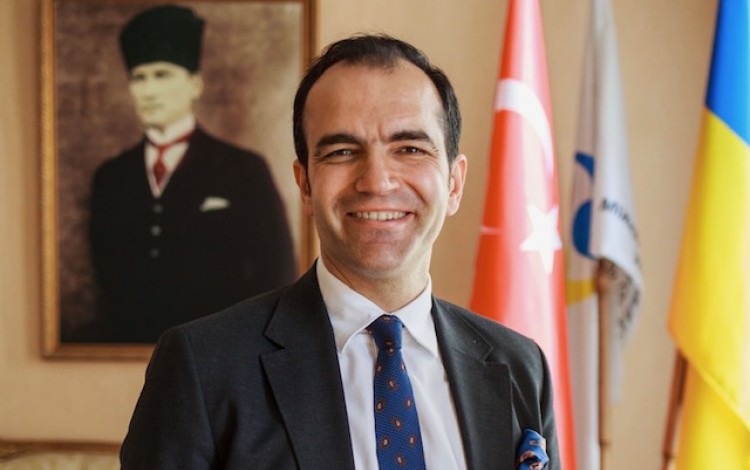 About the interviewee: Burak Pehlivan is Chairman of the Turkish-Ukrainian Business Association (TUID)
Business Ukraine magazine

Burak Pehlivan is not a man to rest on his laurels. As the long-serving Chairman of the Turkish-Ukrainian Business Association (TUID), he is one of the hardest-working figures on the Ukrainian business scene and a familiar face at conferences and networking events across the country. Nevertheless, when the forty-three-year-old sits down with Business Ukraine magazine at the head office of TUID on central Kyiv’s Saksahanskoho Street in late October, he allows himself to pause for a moment and reflect on the considerable progress of recent years. “You know,” he says, “We are really very lucky to be involved at this point in the relationship. There is a such a great ecosystem now in place between Turkey and Ukraine. We have all worked so hard and now we are seeing the results of those efforts.”

Pehlivan’s sense of optimism at the current state of Turkish-Ukrainian business ties is understandable. Over the past decade, Turkey has emerged as one of Ukraine’s most important trading partners. The country ranked as the fourth-largest export market for Ukrainian companies in the first six months of 2021 and the number seven source of imports into Ukraine during the same period. Overall, bilateral trade was up by around 45% year-on-year in January-August 2021 and is on track to reach an annual total of more than USD 6 billion. The TUID Chairman also notes that Turkey was the largest source of international investment into Ukraine during the turbulent pandemic year of 2020. Bilateral business ties between the Black Sea neighbors are clearly blossoming.

This encouraging outlook is reflected in the fortunes of TUID, the business association Pehlivan leads. While many of the international chambers of commerce in Ukraine struggled with the disruptive impact of the global coronavirus pandemic, the Turkish-Ukrainian Business Association actually grew in 2020, welcoming a total of 30 new members. A further 26 companies have joined TUID in the period up until October 2021, bringing overall membership to more than 200 companies.

TUID’s recent expansion has also been geographical. The organization unveiled a Southern Ukraine Representative Office in early autumn in Ukrainian Black Sea port city Odesa. This new Representative Office is designed to support and enhance the work already being done by existing TUID regional offices in southern Ukrainian cities Odesa, Kherson, and Zaporizhia. In recent years, the business association has also established regional offices in Lviv, Vinnytsia, and Kharkiv, along with a Western Ukraine Representative Office in Lviv and head office in Kyiv. This is comfortably the most extensive national network of any international chamber of commerce in Ukraine.

With bilateral trade across the Black Sea on the rise, Pehlivan expects the Southern Ukraine Representative Office to be busy in the coming months. He points to Turkey’s traditionally strong position in the construction sector, and notes that this creates huge opportunities as Ukraine seeks to achieve a long overdue generational infrastructure upgrade. In particular, he expects Turkish companies to participate in the modernization and expansion of the numerous seaports along Ukraine’s southern coastline that act as vital gateways for the country’s growing international trade. “Around 20% of the world’s top 250 construction companies are Turkish and this has translated into a prominent presence in Ukraine,” notes Pehlivan. “Turkish companies have been involved in more than 200 major Ukrainian construction projects with a total value of over USD 8 billion. This includes thousands of kilometers of roads and highways, bridges and metro lines, airport terminals and runways, football stadiums, shopping centers, residential complexes.”

Turkey’s involvement in construction and infrastructure projects is one of the best-known aspects of the country’s business activities in Ukraine, but Pehlivan is eager to underline the increasingly diverse range of Turkish companies currently present in the Ukrainian market. Flagship brands include the lifecell mobile communications operator and Turkish Airlines, which has established itself as one of the leading international carriers in Ukraine with flight services from Kyiv and a number of regional airports. He notes that the most dynamic sector over the past two years has been the renewable energy industry, with a range of Turkish companies entering the market and investing hundreds of millions of dollars, and also cites growing Turkish interest in Ukraine’s impressive IT industry.

Pehlivan is bullish about the prospects for expanding partnership in the agriculture sector, where Ukraine and Turkey have long enjoyed intensive cooperation. He expects the recent opening up of Ukraine’s agricultural land market to drive an increase in capital among Ukrainian agribusinesses that will translate into opportunities for Turkish companies offering everything from fertilizers and seeds to state-of-the-art machinery and greenhouses. With much of the famed Ukrainian breadbasket now experiencing the negative impact of climate change and concerns mounting over the future viability of the agricultural industry especially in traditional farming regions of southern Ukraine, there is also potentially a considerable market for Turkish agricultural irrigation know-how and technologies.

The largest single issue on the Turkish-Ukrainian economic agenda remains a free trade agreement between the two countries. Negotiations towards a landmark free trade deal have been ongoing for a number of years and have become bogged down despite strong and often vocal political support from Kyiv and Ankara. The next opportunity to sign off on the widely anticipated document will come when the Ukrainian and Turkish presidents meet in early 2022 for a summit to mark the thirtieth anniversary of diplomatic relations.
Pehlivan believes overwhelming majorities within the political and business communities in both Turkey and Ukraine back the idea of a free trade deal and says limited levels of opposition are to be expected.

He likens the situation to the hesitancy from segments of the Turkish business community in the 1990s as the country prepared to sign a customs union agreement with the European Union, and argues that much like the earlier EU deal, free trade with Ukraine will also prove to be a win-win for both countries. “Free trade would ultimately bring growth to every sector. We all need to stop worrying about getting a bigger piece of the pie for ourselves, and start focusing on the more important task of making the pie itself bigger,” he says.

Without a free trade agreement in place, Pehlivan warns that it may prove difficult to maintain double digit annual growth in bilateral trade throughout the coming decade. Even so, he is confident that the broadly positive trends of recent years will continue, regardless of developments at the free trade negotiating table. “The Turkish and Ukrainian economies are complementary. In many sectors, they complete each other rather than directly competing against each other. We are already benefiting enormously from these synergies. As ties continue to strengthen, the economic compatibility of Turkey and Ukraine will remain one of our greatest advantages.”