In recent years, Turkish-Ukrainian ties have deepened significantly in a wide range of sectors from politics and defense to trade and investment. Turkish Ambassador to Ukraine Yagmur Ahmet Guldere believes the best is yet to come and says the true strength of the bilateral relationship lies in the many natural synergies that create clear gains for both sides. 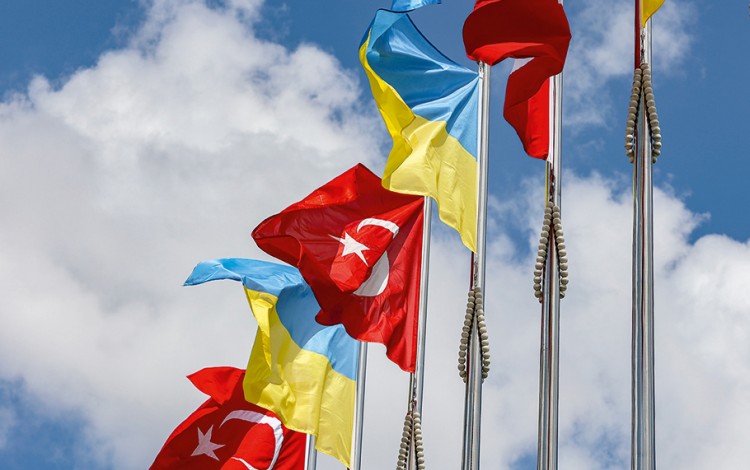 When I first took up my post as Turkish Ambassador to Ukraine in early 2019, I felt honored, excited, and highly motivated. I was already familiar with how close our two countries were. Nevertheless, after three years, I have come to the conclusion that what we have witnessed so far is but a modest reflection of what we can actually achieve together.

Politically, relations between Turkey and Ukraine are currently excellent. We have reached such a level that our presidents meet twice a year and hold regular phone calls between meetings. There is also regular engagement between government ministers on a wide range of issues. Last year, we introduced the new 2+2 Quadriga format, which brings the foreign and defense ministers of both countries together annually.

One crucial element in this intensive political dialog is the reciprocal trust that exists between the two sides at the political level. While there are inevitably nuances in the bilateral relationship on minor matters, when it comes to core issues such as Ukraine’s territorial integrity, Turkey has been clearly and consistently supportive of Ukraine. Our non-recognition policy was reaffirmed by President Erdogan during his UN General Assembly speech in September 2021, and by Foreign Minister Cavusoglu, who personally attended the inaugural Crimea Platform Summit in Kyiv in August 2021.

Bilateral trade trends are also encouraging. Despite the disruptive influence of the global pandemic, bilateral trade remained steady last year at USD 4.5 billion and rose during the first seven months of 2021 by almost 50%. This growth is fueling optimism that the two countries can reach the annual trade target of USD 10 billion set forth jointly by the presidents of Turkey and Ukraine.

One key step towards attaining this goal is concluding a Turkish-Ukrainian free trade agreement. Negotiations over a free trade deal have been ongoing for a number of years. When you try to conclude such an agreement between two economies of this scale, there is bound to be hesitation on both sides. Even so, I believe it is high time we looked at the bigger picture.

Curbing competition may be convenient for some, but through carefully calibrated calendars and by taking into account our comparative advantages, we should be able to find common ground and let our two countries reap the benefits of competition that this free trade agreement envisages.
Investing in Ukraine’s Future

Bilateral economic cooperation is not just about trade, of course. The USD 4 billion of Turkish investment in this country is a clear signal that Turkish businesses believe in the bright future of Ukraine. Naturally, there are areas where improvements could be made to create a more investment-friendly climate in Ukraine, but the verdict of the Turkish business community appears to be overwhelmingly positive.

The development of Ukrainian industrial parks could help boost the level of Turkish investments further. This concept is rather new in Ukraine, and the necessary legislation is still not fully in place. Turkey has great experience in this field. In the Turkish “organized industrial zone” system, central government, local authorities, and private business join hands. Thanks to well-established principles that don’t change from one region of the country to another, investors know in advance what to expect in terms of incentives and benefits, and are able to conduct all formalities with just one counterpart.

I am also proud to witness first-hand during my regional visits throughout Ukraine how Turkish companies are actively contributing to the country’s ambitious and much-needed modernization. Whether it is in terms of building roads, constructing logistically critical bridges in places like Zaporizhia and Kremenchuk, extending the Kharkiv metro, or building new airport terminals in major cities, Turkish contractors are simply everywhere.

Cooperation could grow even stronger with the development of public-private partnership projects in Ukraine. Turkey has used this model quite effectively for some time to develop airport, highway, bridge, and hospital projects, including the new Istanbul Airport. Effective implementation of this model in Ukraine could pave the way for some truly spectacular joint projects.

Without doubt, tourism has been a key area of cooperation between Turkey and Ukraine. Even in 2020, when the pandemic dealt a huge blow to the global tourism industry, Turkey still managed to host almost a million Ukrainians. This year, we expect to surpass pre-pandemic figures and approach a new annual record of two million Ukrainian visitors.

This was made possible by a number of factors, especially the intensive vaccination drive in Turkey and the safe tourism certification program we developed in response to the pandemic. By vaccinating the vast majority of people working in the tourism industry prior to the tourism season, and by meticulously implementing the safe tourism certificate program that covers every aspect of the tourist experience from transportation and accommodation to the distance between individual sun loungers on the beach, we have managed to keep visiting guests happy and healthy.

It is also worth emphasizing that tourism in Turkey is not only about sun, sand, and sensational buffets. We also offer modern winter resorts which hosted Ukrainian tourists for the first time last year. Health tourism is another sector that is witnessing a growing number of Ukrainians traveling to Turkey for medical procedures and operations in state-of-the-art hospitals before enjoying a nice holiday to recuperate.

Last but not least is sports tourism, which continues to draw more and more people to Turkey each year. Whether you are a golfer or a cyclist, or if you simply want to collect the autographs of the players from your favorite football team, you’ll find what you’re looking for in Turkey.

Building Bridges Across the Black Sea

One aspect of the growing tourist traffic between Turkey and Ukraine that carries particular importance in my eyes is the potential it has to create a special bond between the two nations. Despite being neighbors across the Black Sea, interaction between Ukraine and Turkey has not always been intensive due to a variety of historical reasons. Tourism is perhaps the best way to address this deficit.

Every Ukrainian who visits Turkey and every Turk visiting Ukraine soon comes to realize that the two nations have much in common and are not so different after all. In my opinion, this simple revelation is the most effective step towards stronger future cooperation between our two countries.

The historic bonds connecting Turkey and Ukraine can also help facilitate this process. There are thousands of Ukrainians with Turkic roots. In addition to the large Azerbaijani population in today’s Ukraine, Crimean Tatar, Gagauz, and Meskhetian Turk communities constitute natural bridges that connect Turkey and Ukraine. Meanwhile, there are millions of Turkish citizens with Crimean Tatar roots.

Unfortunately, the Crimean Tatars and Meskhetian Turks have had a lot to endure throughout history, especially after the catastrophic deportations of 1944. More recently, the events of 2014 have certainly exacerbated these problems. Together with the Ukrainian leadership, we stand with these communities and assist them with various projects. One of the latest examples of this support was the decision of presidents Erdogan and Zelenskyy to construct 500 houses for Crimean Tatars who lost their homes following the illegal annexation of Crimea in 2014.

Beyond Suleiman and Roxolana

When exploring the cultural similarities and historical bonds between Ukraine and Turkey, it saddens me to note that many people in both countries still tend to oversimplify the scale of our past interaction. They typically only refer to the story of Suleiman the Magnificent and Roxolana, or Hurrem Sultan as she is known in Turkey.

This chapter in our common history is truly intriguing, but the there are many other fascinating stories involving the Ottoman Empire and the Ukrainian Cossacks that are also worthy of attention, along with many Turkish-Ukrainian legends we have yet to explore hidden within the walls of old fortresses like Akkerman and Chihirin.

I hope Turkish and Ukrainian historians will have the chance to study these episodes more intensively in the future and come up with new accounts that will challenge the traditional dominance of Suleiman and Roxolana. In terms of cultural heritage, I would also like to emphasize that there are multiple Turkish and Ottoman military burial sites in Ukraine that would be of great interest to Turkish tourists if they were made more accessible for visitors.

One area of cooperation which has attracted a lot of attention lately is in the defense industry. In particular, Ukraine’s purchase of Bayraktar-TB2 drones has made quite an impact. Turkish-Ukrainian cooperation in defense should not come as a surprise because there is a natural synergy between the two nations. Ukraine has great experience, know-how, and production capabilities in terms of the country’s defense industry. However, there are numerous obstacles which impair the Ukrainian defense sector’s competitiveness and limit the country’s export possibilities.

Meanwhile, Turkey has made great strides towards boosting its capabilities in this sphere and currently has a young but cutting-edge defense sector. As such, the defense industries of the two countries complement one another extremely well.

At governmental level and in the private sector, Turkey and Ukraine have been engaged in detailed discussion for some time over how best to activate this huge potential. These talks have already matured into a number of specific projects and represent a win-win scenario for both countries.

After three years as the Turkish Ambassador in Kyiv, I have become convinced that Turkey and Ukraine as countries, as well as Turks and Ukrainians as people, have much more in common than they might think. I am absolutely thrilled to see bilateral relations move one step forward with every passing day, and honored to be able to contribute to this process.

Today’s flourishing cooperation is destined to grow further, for the simple reason that Turkish-Ukrainian partnership reflects natural synergies that create clear gains for both sides. From agriculture to tourism, and from infrastructure projects to green energy, we are just beginning to unleash the true potential of bilateral ties. And based on the evidence so far, it is undeniable that whenever we join hands, the results always surpass our expectations.

About the author: Yagmur Ahmet Guldere is the Ambassador of the Republic of Turkey to Ukraine