UKRAINE REAL ESTATE 2017 FORECAST: Kyiv property market recovery looks set to continue but there is no boom in sight 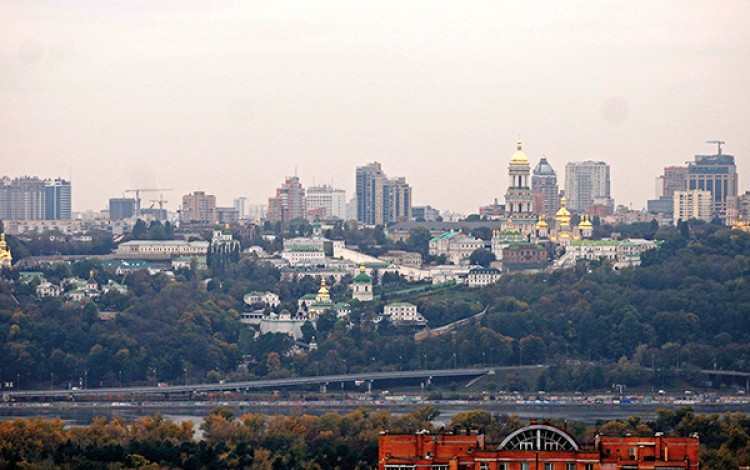 As we anticipate likely trends in the Ukrainian real estate sector in 2017, it is helpful to look back on the past two years of developments on Kyiv’s housing market. In 2015, many real estate investors were concerned about war and instability in Ukraine’s Donbas region, as well as the rapidly depreciating hryvnia currency. This depreciation led to steep decreases in rental rates in Kyiv and eventually forced their delinking from the US dollar. Apartments that had been renting for up to USD 3000 per month saw rents decrease by 50% in US dollar terms, while the premium price segment decreased by about 20-25% in US dollar equivalent compared to rates for early 2014.

In 2015, sale prices were down 20-25% for apartments in older buildings downtown, and 20% for business class complexes in the center. Prices for new family size apartments (100-200 sqm) outside Kyiv’s center decreased by less (10-20%) due to rising demand generated by the influx of families fleeing the Russian hybrid war in the Donbas. However, by the end of 2015, this pricing support effect had run its course.

When compared with tumultuous 2015, the past year has been a period of relative stability for Ukraine’s currency (down only about 9% for the year) and a time of nascent economic recovery. Overall, prices on Kyiv’s housing market have stabilized, with slight price increases in premium class rentals and sales of business class apartments. Sale prices for middle class apartments decreased by less than the decline in the value of the hryvnia (about 3-4%) while economy class properties have dropped in price in US dollar terms at about the same rate as the hryvnia.

For the first 9 months of 2016, the quantity of commissioned living space in Kyiv in square meters was 7% lower than the same period in 2015, which had been 25% higher than 2014. However, despite this year-on-year drop, available figures indicate that apartment sales actually picked up in 2016. Registered sales-purchase agreements for the first six months of 2016 were about 15% higher than in the same period in 2015.

In late 2016, rental prices for many apartments in Kyiv’s center continued to drift slightly downward as local landlords became more willing to negotiate on price. However, prices are slowly growing in the segment for diplomats and expat executives. These rises are primarily due to a shortage of suitable housing. Nevertheless, demand remains relatively soft for premium rentals of USD 5,000 per month and higher. Ambassadors and country directors of multinationals typically rent premium flats in this category.

About three years ago, many expat country directors had to leave Ukraine due to the refusal of international insurance companies to underwrite policies for these expat C-level executives because of the conflict in eastern Ukraine. They have yet to return in large numbers. It is far from certain that there will be an expat executive influx in 2017. This has had a negative impact on rental rates.

The market for Kyiv apartment sales continues to be soft, although prices are stabilizing. At present, it is a market dominated by motivated buyers looking for motivated sellers, with a general absence of “fire sales”. The end of 2016 saw noticeably increased interest in Kyiv’s real estate market among foreign investors, but many potential buyers opted to hold off until after the New Year.

According to a report by the National Bank of Ukraine, in the third quarter of 2016 the quantity of approved mortgages in Ukraine rose marginally. Mortgage financing did not exceed 5% of purchases, but this is still more than double the anemic figure of 2% in 2015. A significant impediment to issuing mortgages remains the portfolios of bad/non-performing hard currency loans issued prior to the 2008 financial crisis. Other obstacles include the unstable hryvnia, high inflation, and lack of trust in local banks. This keeps interest rates high in a bid to attract depositors, which in turn serves to increase the cost of funds for lending. Additionally, Ukrainian depositors generally keep their funds in banks for short periods of around three to six months. This lack of long-term deposits increases liquidity risks for banks.

In lieu of mortgage financing, many local buyers choose to rely on deferred payment financing from developers in order to buy apartments in new housing complexes. Buyers make a down payment ranging from 5% to 70%, with full payment deferred until commissioning of the apartment building or for longer periods. Some developers offer interest-free deferment, but if they increase the per square meter price for new buyers, then prices will also increase for those receiving deferred financing. Deferred payment financing from developers was highly popular among Ukrainian buyers prior to the financial crisis of 2008. However, in recent years it has become noticeably less popular as Ukrainians have felt less confident about the stability of their incomes. The majority of apartment purchases still involve private funds. According to recent market research data, apartment purchases in Kyiv in November 2016 reflect this reluctance to borrow. About 3-4% of buyers used credit financing, around a third used deferred financing from developers, while just under two-thirds used their own funds.

While mortgages for individual property purchases remain relatively rare in Ukraine, Ukrainian banks do lend to developers. Larger developers may take out loans with terms of up to three years, while smaller players can take out shorter-term construction loans when sales are sufficient to support construction. Overall, total lending to developers is small. Instead, developers mainly rely on their own funds and apartment sales in order to finance their projects. As a result, the growing supply of new apartments in Kyiv could threaten developer’s profits and eventually make it more difficult for them to finish their projects. This situation makes it difficult for owners of older apartments outside Kyiv’s center to sell at their asking price. However, we should be careful about using the loaded term “housing bubble” to describe a housing market such as Kyiv, which is not primarily fueled by bank sector financing to builders and buyers.

The stabilization of Ukraine’s currency in 2016 is due to solid fundamentals. According report issued by Standard & Poor’s in December, “The rise in NBU hard currency reserves has increased trust and contributed to stabilization of the hryvnia. The recent stabilization of the hryvnia is also due to the increase in steel prices in the world market and a stable macroeconomic situation in the country.” The report also notes that Ukraine’s currency controls will be liberalized slowly as Ukraine’s National Bank weighs their negative impact on the inflow of foreign direct investment versus the risks to the hryvnia exchange rate should these controls be removed. These solid foundations will support modest GDP growth of 1% in 2016, with most Ukrainian and international sources predicting a further pickup in GDP growth averaging 2.3% per year for the period 2017-2019.

Banking sector reform is particularly important for the real estate industry. In 2015 and 2016, Ukraine made great strides towards reforming its financial sector by closing dozens of banks that did not meet capitalization requirements and those that had large portfolios of related-party loans and murky ownership structures. The December 2016 nationalization of Ukraine’s largest bank, PrivatBank, was another step in this direction. Despite widespread domestic concerns over the costs of privatization, the move was widely praised by the IMF and the EBRD. The market would seem to agree. While the hryvnia dropped slightly on the black market after the nationalization of PrivatBank, overall market reaction to this move was broadly subdued. It will be interesting to see what other financial reforms await Ukrainian consumers in 2017. Will these reforms increase confidence in banks and allow them to attract the deposits they need in order to support the meaningful renewal of mortgage lending? If this does not happen, will many Ukrainians continue to buy and hold real estate as a vehicle for their savings?

Geopolitical trends do not favor Ukraine

All signs indicate that political support for Ukraine among Western governments looks set to decrease sharply in 2017. The inauguration of new US President Donald Trump and the rising influence of rightwing parties in a range of EU countries are both negative developments for Ukraine’s Euro-Atlantic pivot. While US watchers caution against assuming that a Trump administration will automatically be pro-Russian, Trump’s nominee for US Secretary of State has alarmed Ukraine’s supporters. Rex Tillerson is the former CEO of oil giant Exxon, which has seen oil deals worth hundreds of billions of dollars imperiled by US financial sanctions on Russia. Mr. Tillerson has been an open opponent of sanctions. He has long-term relationship with President Putin. Those who criticized the Obama Administration as “soft on Russia” and hoped for a more pro-Ukrainian stance from a new Republican administration may soon yearn for the nuanced policies of Trump’s predecessor and his behind-the-scenes maneuvering to keep EU governments on board with financial sanctions.

Meanwhile, the growing popularity of Far Right European parties may make EU leaders more reluctant to take a strong stance against Russia. Some Far Right leaders in Europe such as France’s Marine Le Pen regard financial sanctions against Russia as American interference in European foreign policy. The EU is facing a struggle to present a united front against Russia and maintain a consensus on financial sanctions. With elections in France, Germany, and the Netherlands scheduled to take place in 2017 there will be little appetite for geopolitical adventurism in Ukraine.

These trends could also threaten Western financial support for Ukraine’s government and serve to block deeper integration between Ukraine and the EU. The silver lining to this situation, if there is one, is that necessity may now force Ukraine’s government to implement real reforms rather than paying lip service to reforms in order to preserve economic aid to the country.

Ukrainian real estate in 2017: what to expect

Barring something dramatic and unexpected such as deep and radical economic reforms, or, God forbid, a flare-up in the Ukraine’s Donbas conflict zone, we can expect the Ukrainian housing market to resemble late 2016. The Trump wildcard will make life interesting for professional Ukraine-watchers and possibly play a role in Ukraine-Russia relations, but the fundamentals of the investment story for Kyiv’s real estate market will likely remain unchanged. In other words, we can expect a slow and steady economic recovery and increasing foreign investor interest in Ukraine, but no major shifts. Mortgages will not return as a viable option for most homebuyers in Ukraine. Currency controls will remain in place with only gradual liberalization (although it is worth stressing that these controls are manageable for foreign investors in their present form with the right legal counsel and deal structuring). There are no obvious reasons to expect a significant rise in rental rates or sale prices in 2017, but much will depend on the hryvnia exchange rate. The Ukrainian real estate market is not particularly hot right now, but there are reasons to be cautiously optimistic about the prospects for the coming year.

About the author: Tim Louzonis (This email address is being protected from spambots. You need JavaScript enabled to view it.) is a co-founder of AIM Realty Kiev, a real estate agency that specializes in real estate for foreign expats. Tim is a long-time expat with Ukrainian roots; he first came to Ukraine as an exchange student in 1993 and returned in 2008.