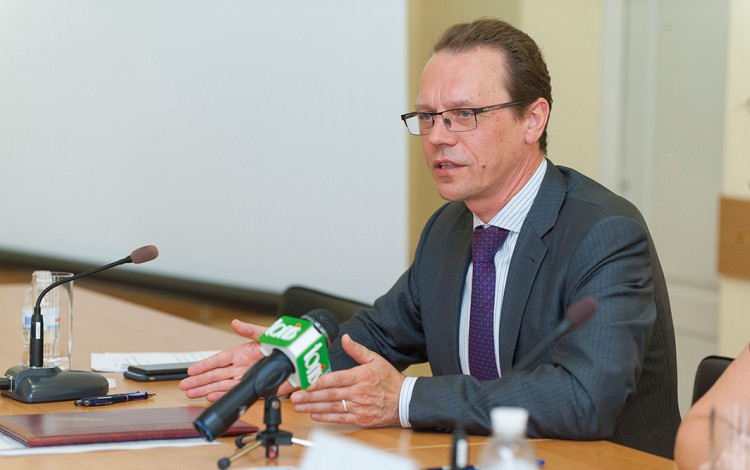 Ukraine’s Business Ombudsman Council (BOC) celebrated its second anniversary in May 2017 with plans already in place to expand the institution. Established in early 2015 to serve as an independent voice for the business community in disputes with the Ukrainian authorities, the BOC has proved one of the most effective and practical reforms of the post-Euromaidan era. The latest figures speak for themselves: in 2016 the BOC closed 570 cases, resulting in a yield of UAH 5.96 billion. A landslide 94% of all complainants said they were satisfied with the work of the BOC. Meanwhile, state institutions adopted 87% of the BOC’s recommendations.

This picture of effectiveness and apparent public-private sector harmony is completely at odds with the overwhelmingly negative media portrayals of Ukraine’s ongoing reform process. It serves as a timely reminder that beyond the headlines, change is slowly but steadily taking place in Ukraine.

Much of the credit for this success must go to Ukraine’s Business Ombudsman Algirdas Semeta. A Lithuanian who previously served as his country’s finance minister before spending five years in Brussels as a European Commissioner, Mr. Semeta was the first person appointed to the BOC back in December 2014. He personally oversaw the recruitment of the current BOC team, which features 23 people. This process was dominated by efforts to identify candidates with both the right professional backgrounds and the requisite integrity.

As an entirely new post-Euromaidan institution, the BOC benefitted from not having to address issues of deeply entrenched corrupt practices or resistance to change from middle management – both major challenges for those seeking to reform Ukraine’s existing state bodies. “Creating the Business Ombudsman Council from scratch was one of the prerequisites for success,” says Mr. Semeta. “Our selection process was rigorous and so far we seem to have got it right. Over the past two years, we have not faced any issues regarding the integrity of our staff.”

The BOC is financed by a coalition of donor countries including Denmark, the Netherlands, Finland, Poland, France, Sweden, Germany, Switzerland, Italy, the United Kingdom, Japan, the United States, and the European Union through an EBRD multi-donor account. It enjoys close ties to Ukraine’s leading business associations. These connections with business associations helped to get word out about the role of the BOC when it launched in 2015, ensuring a steady flow of cases to address from the very beginning. Mr. Semeta has also engaged in a series of regional outreach visits to raise awareness about the institution’s role among business communities beyond the capital city.

Developing a working relationship with government institutions has proved more challenging. The BOC has no official authority and is limited to an advisory role and recommendations. It relies heavily on its credibility as an independent and transparent institution, while also depending on high-level political support in order to operate effectively.

Perhaps unsurprisingly, there was initial skepticism towards the BOC among many of Ukraine’s state institutions. Overcoming these doubters and building mutually beneficial working relationships has been one of the toughest tasks facing Mr. Semeta and his team. “The initial reaction was a little bit suspicious,” he recalls. “Many state institutions thought of us as just another group of lobbyists – and in the Ukrainian context, this was not a flattering characterization. They thought we would take the side of any company that came to us with a complaint. It took us some time to demonstrate that we are a genuinely neutral institution that assesses every case on its own merits and asks demanding questions of companies that apply to us. We also invite the institutions themselves to make their case before reaching our own judgment. Over the past two years, we have demonstrated that we are not afraid to tell companies when we conclude that the state body is in the right. This has helped build a high degree of confidence with Ukraine’s state institutions.”

He sees this process as one of the keys to the effectiveness of the BOC, allowing it to build productive relationships throughout the state sector rather than becoming bogged down in constant confrontations. “I cannot name a single institution or state body that refuses to implement our recommendations or offers particular resistance,” says Mr. Semeta.

There are now plans to build on the initial success of the ombudsman initiative by expanding the current team from 23 to 35 staff members, while gradually moving away from dependency on international donor funding towards state financing and support from Ukraine’s business associations. Will Mr. Semeta stay around to oversee this process? Appointed in late 2014 prior to Ukraine’s first batch of foreign-born government ministers, he is already one of the longest-serving international figures among the country’s post-Euromaidan generation of reformers. “It is a difficult question,” he concedes. “I was working in Brussels for five years prior to my arrival in Kyiv, so I’ve now been away from home for eight years. I will certainly stay until the end of 2017 and then we’ll see.”

While his Baltic homeland may beckon, Mr. Semeta also clearly finds his involvement in Ukraine’s historic transition rewarding. “Before I took this job on, I was very familiar with what was going on in Ukraine thanks to my role at the European Commission. My understanding was that Ukraine is one of the most crucial places where the geopolitical future of Europe, and probably the entire world, is currently being determined,” he says. “This task appealed to me because it involved real activity that could lead to practical improvements. So far, I have not been disappointed. I am happy that we are gradually moving the business climate in the right direction.”