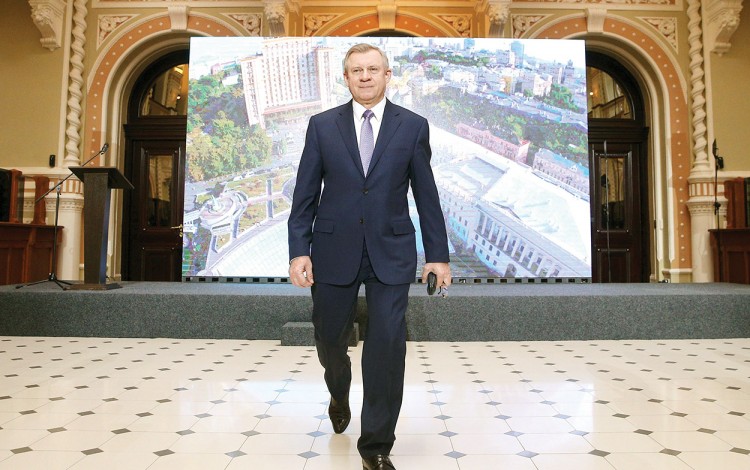 As Ukraine’s economy begins to grow modestly, the country’s Central Bank (known as the National Bank of Ukraine or NBU) is striving to become an anchor of stability under new leadership. The challenges facing the NBU are formidable. Ukraine currently needs to preserve the fragile macroeconomic stability it has achieved over the past two years while using the upswing in the global economy to conduct vital reforms and stimulate further economic growth. This task, however, still meets considerable obstacles. A number of important initiatives including gas sector reform and privatization are being delayed or otherwise held back by what many see as attempts by the country’s oligarchs to find their way back into the system.

In spring 2018, President Petro Poroshenko picked Yakiv Smolii, a banking veteran with over three decades of experience in the sector, to lead Ukraine’s Central Bank. Smolii filled a post that had remained vacant for approaching one year after his predecessor Valeria Gontareva resigned in May 2017. Prior to his appointment, Smolii had served as the acting NBU governor for nine months.

Smolii’s formal endorsement by the Ukrainian president and parliament signaled that the Central Bank will remain committed to reforms. “The appointment of the Central Bank head is a signal to international partners and Ukrainian institutions that the regulator’s policy will not change and an indication that our future course will stay the same despite the expected political turbulence,” Smolii said upon his confirmation.

Throughout a long banking career Smolii has earned widespread respect within Ukraine’s financial sector, mostly for his bank-building experience. Smolii helped transform one of the country’s inherited Soviet banks, Aval, so that it attracted the interest of Austria’s Raiffeisen, which bought the bank in 1994 in a transaction that reportedly made Smolii a millionaire. Smolii then developed the smaller bank PrestigeBank and sold a minority package to Austria’s Erste. He has a low-profile demeanor and does not rush, a former Ukrainian banker told me. He is widely expected to be less hawkish when it comes to monetary tightening and banking sector clean-ups than his predecessor, who oversaw the largest shakeup of Ukraine’s banking industry since 1991.

Smolii is rich, independent, and tough, notes Vladyslav Rashkovan, who served with the new National Bank head as deputy NBU governor right after Ukraine’s 2013-14 Revolution of Dignity. “Smolii is in the position not to be corrupted, not to be influenced, and not to waste time,” Rashkovan tells me when we meet in his IMF office after the Ukraine delegation wrapped up its visit to the April IMF/WB spring meetings. Smolii led a large delegation to those meetings, a move that was interpreted by many as a successful effort to reinforce the message of unity among Ukraine’s reformers. The delegation included then-Finance Minister Oleksandr Danylyuk and Naftogaz CEO Andriy Kobolyev, both seen by many as key figures within Ukraine’s reformist camp. “One thing that is important is that he is quite independent,” Rashkovan says of Smolii. “It is very difficult to influence his decisions from the outside. But at the same time, he trusts his people, he can delegate decision-making, and he relies on his team to make sure that decisions are not politically motivated.”

During his tenure as acting NBU governor, Smolii carried out a conservative monetary policy. Notably, he achieved progress in financial sector deregulation while keeping the NBU out of politics. He also tried to reassure the banking sector and paved the way for a resumption in lending. “We want to create favorable conditions for all market participants now that the banking system is healthy, transparent, and clean from the problems of the past,” Smolii commented on his policies.

The NBU has been consistent in gradually lifting restrictions on foreign currencies and deregulating the banking sector, including the recent decision to lift daily limits on foreign currency trading by banks, allow early repayment of foreign currency loans, and enable online document processing related to bank guarantees. The NBU is also gradually embracing a longer-term outlook. Looking beyond the immediate future, the NBU supports the adoption of a new law which would solidify the deregulation of the foreign currency market and make the market more transparent, potentially bringing it closer to international standards and the requirements of Ukraine’s Association Agreement with the EU.

In March 2018, the NBU adopted its midterm strategy, outlining major priorities for the bank’s operations. “Economic growth” is a term which one hears more often from Smolii than from many of his predecessors. But what really makes the job of Ukraine’s Central Bank head different this time is the institution. “The NBU is not a one-man show,” Smolii himself readily admits. The NBU’s institutional capacity is the ultimate safeguard of its independence from politicians and oligarchs, and this capacity has grown undeniably since 2014. “This is what makes the current central bank different from what it was four years ago, and this is what makes it different from other institutions in Ukraine,” Rashkovan notes. The post-2014 NBU includes decentralized decision-making processes with strong roles performed by NBU committees and the board. “Smolii as governor is backed by a strong institution,” Rashkovan says. “Even if he comes under external pressure, and I think that might happen, I believe he will withstand it, not only because he is a strong individual with a very independent mindset, but also because he is supported by a strong institution.”

About the author: Oksana Bedratenko is an independent analyst based in Washington DC. She formerly served as the Senior Local Economist at the US Embassy in Kyiv.