THE REINVENTION OF A SOVIET BANKING BRAND 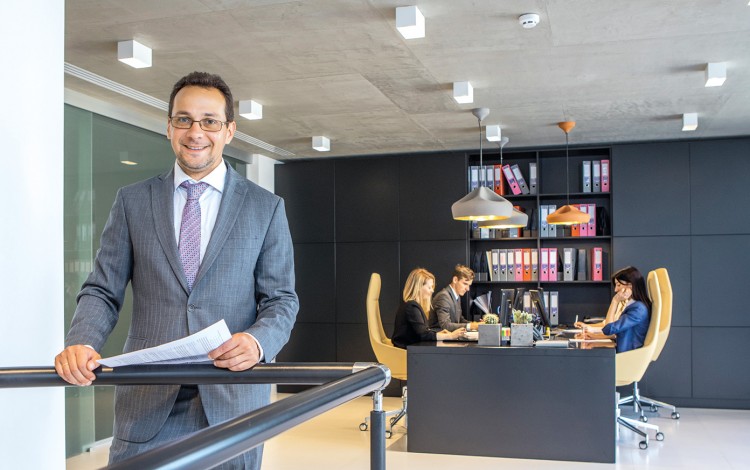 About the interviewee: Danylo Merkulov is the Head of Private and Premium Banking at Oschadbank (Photo: Sasha Medvedev)
Business Ukraine magazine

They say that while money talks, wealth whispers. There is more than a hint of this gentlemanly discretion on display at the new Oschadbank Premium Banking Center in Kyiv. Located in the Ukrainian capital’s stylish Vozdvizhenska district, this Premium Banking Center functions as a flagship for the state-owned financial institution’s shift away from the no frills approach inherited from the Soviet era towards the more sophisticated service standards of today’s consumer culture. However, it is a flagship without a flag. In keeping with the bank’s discrete approach to premium wealth management, there are no flashing neon lights or bold branded logos to draw the attention of passersby. Instead, the entrance features inconspicuous yet imposing plain black masonry and glass paneling. The Center also boasts its own secure underground car park, allowing clients to come and go completely unnoticed if desired.

Once inside, guests encounter a VIP vibe more commonly associated with the First Class lounges of the world’s busiest airport hubs. A series of private banking rooms come complete with individual cashier counters, while some of the larger rooms also offer conference facilities. Examples of Ukrainian contemporary art decorate the entire Center, with clientele able to purchase anything that may take their fancy. The interior concept is the work of designer Sergiy Makhno, who sought to combine the traditional values of financial conservatism with the innovative mood of today’s transitional Ukrainian society. The result is a funky yet functional facility that neatly encapsulates Oschadbank’s post-Maidan reinvention.

Oschadbank entered the growing Ukrainian premium banking services sector in spring 2016 as part of the wholesale changes taking place at the bank following the early 2014 arrival of Andriy Pyshnyy as Chairman of the Management Board. Progress has been fast, with a 59% increase in premium banking clients and 61% growth in premium assets between June 2016 and June 2017. It is not hard to see why the premium segment holds such allure for Mr. Pyshnyy and his reform-minded team. While the number of premium banking clients currently represents just 1% of Oschadbank customers, they account for around 33% of the bank’s total assets under management.

Many of these premium customers are existing clients who have taken advantage of the upgraded services on offer, explains Oschadbank’s Head of Private and Premium Banking Danylo Merkulov. “Around 65% of our premium and private banking account holders were already existing clients who have increased their deposits once they learned we were launching premium and private banking services,” he says. “They are attracted by the security guarantees we can offer as a state-owned institution, together with the range of upgraded services on offer. As the economy stabilizes, there is also a general shift away from storing wealth in bank vaults towards returning money to bank accounts. This offers greater returns coupled with lower risks. The country is changing and the banking system is changing with it. People see these processes taking place and want to be part of it.”

The Premium Banking Center is Kyiv is the first of a series planned by Oschadbank. The location of this inaugural Center reflects the current concentration of premium and private banking clientele in the Ukrainian capital, which Mr. Merkulov estimates as accounting for approximately 40% to 45% of the overall domestic market. Similar Centers are set to open in Kharkiv and Odesa over the coming year as part of an expansion agenda that will also see 66 Premium Zones opened in existing Oschadbank branches by the end of 2018.

To qualify as a premium banking customer with Oschadbank, clients require a minimum of UAH 1 million in deposits, with the larger figure of UAH 2.5 million necessary to meet the requirements of the private banking category. The current clientele is surprisingly young given the typical perceptions of wealth concentration in Ukrainian society. “The most well-represented demographic at present are 35 to 45 year olds,” says Mr. Merkulov. “Around two-thirds of our VIP banking clients are males. This includes a broad selection of backgrounds ranging from ‘old money’ dating back to the post-Soviet transition, to company owners, corporate executives and the CEOs of leading mid-sized SMEs. We are also seeing growing numbers of IT professionals and other entrepreneurs in sectors like computer games production seeking premium services. We try to tailor our services to meet the specific needs of each group.”

He estimates that the domestic market for VIP banking is still far from saturated, offering the figure of approximately one million Ukrainian households and counting. “Up to one-third of this number do not yet identify as premium banking clients or may have previously chosen to deposit their money with several different banks. One of the key tasks for Oschadbank over the coming period is to engage with this client pool. Our expectations for the segment are quite high. We expect to see significant further market expansion and anticipate this growth will take place at a faster rate than current government forecasts for national GDP growth. According to our forecasts, annual increases of 10% in the market for premium banking services is an optimistic but plausible scenario. Over the next five years, we see particularly strong potential for new premium clients to emerge in particularly dynamic sectors of the economy like agriculture, infrastructure, energy, and IT.”

In order to appreciate the full significance of Oschadbank’s expansion into the VIP world of premium banking, it is important to appreciate the changes that have taken place at the bank since 2014. In the aftermath of Ukraine’s Revolution of Dignity, an entirely new management team took over at Oschadbank with a brief to reinvent an institution viewed by many as the epitome of Soviet-style state-owned inertia. The launch of premium banking services is part of an ambitious agenda that also includes a new focus on SME support and a complete overhaul of the bank’s vast nationwide network of branches. “The development of premium services has allowed us to deliver a range of different messages to different stakeholders,” says Mr. Merkulov. “For international partners such as the EBRD, it has helped us to demonstrate that we are not just a mass market savings bank but are also capable of working in different segments and expanding our business model. In the space of less than two years, we have managed to launch an entirely new service. The example of premium banking gives our international partners an idea of our ability to transform the entire bank. Meanwhile, our clients also see that we are prepared to adopt specialized approaches to meet their personal requirements. We are giving them the right to choose and sending a strong message that they are important to us.”

Since the launch of Oschadbank’s premium banking services, the focus has understandably been very much on domestic audiences. However, Mr. Merkulov says the bank also hopes to attract international clients seeking VIP banking options in Ukraine. “The majority of our current clients are local residents but we have already begun proposing our premium banking services to international audiences,” he says. “We would like to be the bank of choice among non-residents as well as Ukrainian nationals. We have already started the process of hiring English-speaking managers in Kyiv. Ultimately, we would like to have several special locations staffed by English-speaking managers where foreign clients can feel completely comfortable. This would be a logical extension of the services currently on offer to our premium banking clients. There is no reason why non-residents should not also have this option. After all, we are here, we understand your needs, and crucially, we speak your language.”