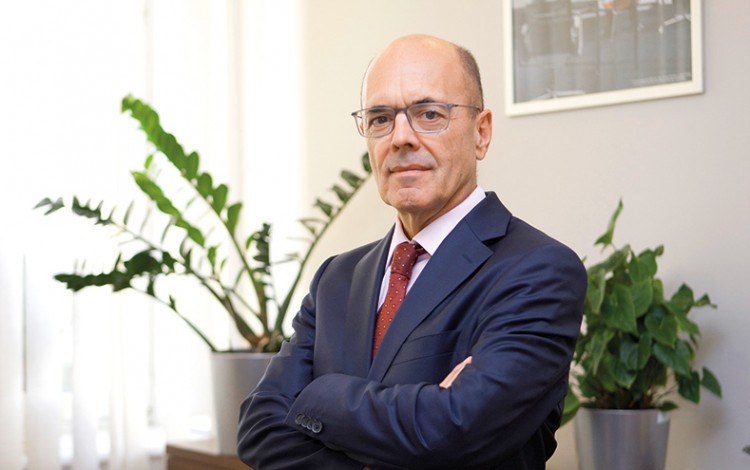 About the interviewee: Gerhard Boesch is First Deputy Chairman of the Board at Raiffeisen Bank Aval
Business Ukraine magazine

Anyone complaining about the slow pace or superficiality of Ukraine’s post-Maidan reform process clearly does not have the country’s banking sector in mind. Since 2014, Ukraine’s banking system has undergone an unprecedented overhaul that has seen decades of corrupt practices confronted. Around half of the country’s banks have since closed or been forced out of business, while those that have survived the reformist purge now find themselves in a new regulatory environment altogether. As First Deputy Chairman of the Board at Raiffeisen Bank Aval, Austrian Gerhard Boesch has witnessed the transformation of the Ukrainian banking sector from the inside. He offers an upbeat but qualified appraisal of the results thus far.

Mr. Boesch is one of the most seasoned international figures in the Ukrainian banking industry today. He has been in Ukraine with Raiffeisen Bank Aval since 2006, when he was among a wave of foreign bankers to arrive during a post-Orange Revolution flurry of international investment into the Ukrainian financial sector. Over the intervening eleven years, he has witnessed numerous periods of major turbulence. However, he says the changes since 2014 represent by far the biggest shift in Ukrainian banking culture to date.

The Austrian is quick to give credit to the National Bank of Ukraine (NBU) for driving the ambitious reform agenda of the past three years. He believes the decision to appoint a new team of reform-minded professionals to senior positions within the NBU in 2014 was decisive, paving the way for breakthroughs that have surprised even the most optimistic of observers. “The National Bank of Ukraine now has a different institutional DNA,” he reflects. “I would go so far as to say that five years ago, there was a broad consensus internationally that the NBU was probably the worst central bank in the region. This perception has undergone a complete transformation. While it may not necessarily be universally regarded as the best in the region, the NBU is now seen as the institution that has made the biggest and fastest progress.”

The NBU’s readiness to close dozens of prominent Ukrainian banks has made a particularly strong impression. In a cultural climate where the top one percent often behave with an air of complete impunity, the closure of banks tied to some of Ukraine’s wealthiest citizens has been a rare example of rules trumping influence. “It was a positive shock to see that the NBU was strong enough and independent enough to go after some quite prominent oligarch-owned banks. This sent out a very strong signal to the remaining banks that they need to comply with the regulations of the industry,” says Mr. Boesch.

Despite this encouraging assessment, he recognizes that much still work remains before the reform process is complete. Nevertheless, the framework put in place by the NBU has succeeded in aligning Ukraine with broader European monetary policy trends. “It is still far too early to say ‘mission accomplished.’ We are not there yet, but the policy mix is now in place. The NBU is no longer an outlier in terms of monetary policy. This has broad implications not only for the banking sector but for macroeconomic stabilization in general.”

One of the biggest tasks facing the revamped Ukrainian banking sector is to boost lending. The sharp economic shocks of 2014-15 have now given way to a period of steady growth, but the gains of the past eighteen months remain extremely modest given the low starting point of the current upward trend. A lack of access to financing is widely cited as one of the factors preventing a more robust recovery, but Mr. Boesch believes this is a challenge the banking sector cannot address in isolation. He sees it as part of wider problems with the legal environment that require comprehensive solutions on a national scale. “We need to restart lending in order to move beyond the current period of economic stabilization. Banks have to play a bigger role in taking the country towards a stronger economic recovery. This is not currently happening. The key obstacles are weak rule of law and lack of creditor protection. It is still too easy for borrowers to avoid repaying loans, so banks are inevitably cautious. This means that we restrict ourselves to a much smaller number of loans that we theoretically could. If we had more confidence in our rights as creditors and if we felt protected by the courts, we could lend to far more people. In that sense, it is very much part of the broader fight against corruption. In order to change this situation, many institutions have to deliver. Ultimately, it is a task for parliament.” If the right protections were in place, he is in no doubt that the loan portfolios of Ukrainian banks would soon begin to expand rapidly. “The clients are there,” he says.

The shock therapy of the past few years has radically altered the Ukrainian banking industry and changed the way the sector as a whole operates. While Mr. Boesch acknowledges the need to achieve key monetary policy targets such as lower interest rates and the reduction of inflation to manageable levels, he feels comfortable speaking about the industry in terms of a new era. “We have witnessed a change in culture within the banking industry. All the particularly problematic banks have been closed and the rules of the game are now different. This is not yet a perfectly level playing field but we are much closer to achieving that result.” He points to the NBU’s greater emphasis on communications strategy and openness as evidence of this changing climate. “There is a new sense of predictability from the national bank. Ukrainian banks have a clear idea of the regulations they must meet and an understanding of the thinking behind the policies adopted by the NBU. It is now possible to talk to the regular, which was never the case in the past.”

Mr. Boesch believes this cultural shift is also evident among banking customers. “Client behavior has changed for the better in recent years,” he says. “They now tend to have a much better understanding of the need for greater transparency over issues like company ownership. This has been a top down process enforced by the regulator, but it is no longer so difficult to explain it to clients. They are increasingly recognizing that if they want to run a modern business and cooperate with professional banks, they must also change their behavior. There is an understanding that if the Westernization of Ukraine continues, they will have to adapt accordingly. In the final analysis, they are coming to realize that this is in their best interests. It is a very welcome trend that shows the country is moving broadly in the right direction.”

As attitudes towards banking services change, Ukrainians are also returning to the country’s banks in larger numbers. While Mr. Boesch points out that Raiffeisen Bank Aval traditionally serves as something of a safe haven during periods of economic instability, he acknowledges that confidence in the banking sector has long been an issue. This lack of faith in Ukraine’s banks made it into the international headlines in late 2016 when e-declarations revealed the vast wealth that many MPs and civil servants kept in cash. Bank closures have done little to bolster the reputation of the industry, but the growing sense of economic stabilization has led to an increase in the number of people entrusting their money to banks. “What we have seen over the past six to twelve months is that deposits are coming back to the banking system. This growing client base has allowed banks to reduce the interest rates they offer without losing deposits. Confidence is clearly higher than it was a year ago and this leads to greater demand for banking services. If you choose to keep your money under the mattress, this brings certain risks while you also miss the benefits of interest payments.”

As they seek to increase their footprint on the Ukrainian market, these international banking brands will draw on the tough lessons they have learned since the heady days of the 2000s. “Investments in the banking industry in 2005-2008 tended to be driven by very unrealistic expectations of how fast Ukraine would converge with European standards. Adapting to reality was a painful process and you could argue that many banks are still traumatized by the losses they incurred, making them overly pessimistic,” says Mr. Boesch. “Nevertheless, this experience has equipped us to analyze the country more realistically. It is has allowed us to find a sustainable model for growth without taken too many risks. This is a near ideal position to be in.