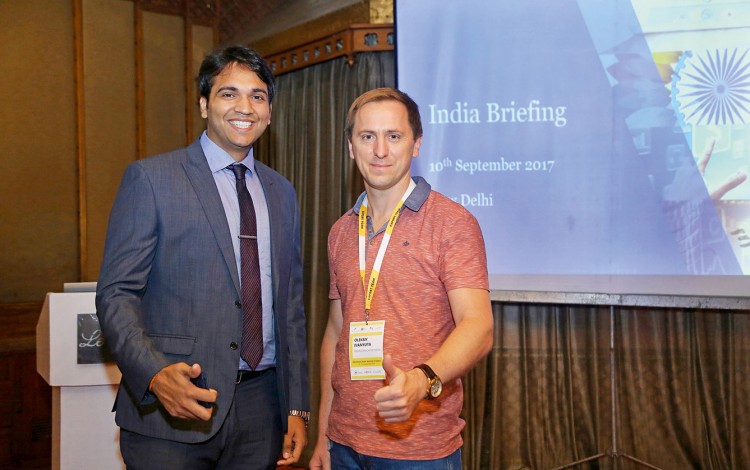 The geopolitical implications of Ukraine’s Association Agreement with the European Union have dominated the headlines in recent years, but many Ukrainian companies are discovering even greater opportunities in eastwards expansion. Asia offers Ukrainian businesses the chance to tap into some of the world’s fastest-growing economies while boasting expanding populations eager to benefit from Ukraine’s agricultural wealth and high tech knowhow.

India emerged as the largest single market for Ukrainian agricultural products in the first ten months of 2017, accounting for over 11% of all Ukrainian agricultural exports with a value of around USD 1.5 billion. In second place was Egypt, accounting for a 7.5% share, while the largest European export market was the Netherlands, which received 6.9% of Ukraine’s agricultural exports over the same period. This trend towards Asian and African markets highlights the broadening global horizons of Ukrainian agribusinesses, while also emphasizing the potential offered by vast Asian markets such as emerging economic superpower India. Ukraine ranks among the world’s leading exporters of sunflower oil, maize and wheat, with India already receiving around one-third of Ukraine’s sunflower oil exports. Ukraine’s share of the Indian market rose approximately 10% over the past year and now accounts for 39.4% of Indian sunflower oil imports. Many market observers believe this trend will strengthen in the coming years.

Ukraine’s increasingly impressive Asian export figures have attracted the attention of government officials charged with promoting Ukrainian exports on global markets, leading to a major trade mission to India in early autumn 2017. The mission, which was organized by Ukraine’s Export Promotion Office and sponsored by the Western NIS Enterprise Fund (WNISEF), visited New Delhi and Mumbai. Ukraine’s Deputy Minister for Economic Trade and Development Nataliya Mykolska and Deputy Minister for Agrarian Policy Olha Trofimtseva led a large delegation of Ukrainian officials and representatives of individual companies in a host of governmental and B2B meetings.

This trade mission reflects the proactive approach adopted by Ukraine in the wake of the 2014 Revolution of Dignity. The country’s recently established Export Promotion Office has been at the forefront of this process, coordinating a series of similar missions globally in a bid to open up new markets and move beyond the relatively narrow confines of the former Soviet sphere. WNISEF export promotion manager Vitaliy Bigdai sees the India mission as a demonstration of Ukraine’s newfound willingness to take the initiative in promoting itself as an international trade partner. “We often hear people say ‘the world is not waiting for Ukraine.’ In the case of the trade mission to India, we demonstrated an appreciation of this fact and showed our readiness to visit the market and explore while listening and learning from new contacts.”

India is likely to remain high on the list of priorities among Ukraine’s export promotion pioneers for some time to come. Mr. Bigdai notes that India is currently Ukraine’s third largest export market after the EU and Russia, with Ukrainian exports focusing on raw materials and commodities. “Given India’s population of 1.3 billion and rising standards of living, the country represents a market of great untapped potential for Ukrainian manufacturers and service providers. There is huge immediate potential for increased exports in the agricultural and processed food sectors, as well as machine building and manufacturing. There is also great potential for Ukrainian exporters to build market share in India’s consumer goods market by offering high quality and affordable goods.”

Mr. Bigdai believes the India outreach initiative demonstrated the value of Ukrainian government and private sector cooperation but also stressed the importance of a case-by-case approach that recognizes the nuances and peculiarities of every individual export market. “I believe the India trade mission can serve as an excellent example of the possibilities when we have the public and private sectors working together to promote Ukrainian economic interests abroad. However, in order to maximize our potential in any foreign market, we must first take time to understand the specifics of the market including the local needs and business practices, while also looking to identify our own competitive advantages. This requires time, effort, and a long-term commitment on the part of both government and the private sector. The opportunities for success are there for the taking.”

Such trade missions represent a real-time learning curve for Ukraine’s exporters themselves, many of whom are eagerly seeking out new markets in the wake of geopolitical realities that have restricted access to the formerly dominant Russian market. Andy Kozlov, who is Sales and Marketing Director at privately owned Ukrainian research and development company R&S Quantum, was part of the trade delegation that made the trip to India. He welcomes greater government promotional efforts of this nature, both for the direct networking benefits they can bring and for the longer-term insights they provide into competing on global markets. “The more foreign trade missions we take part in with the Export Promotion Office, the more insights we gain into boosting Ukraine as a brand and assisting other Ukrainian exporters with life hacks when it comes to engaging customers outside of Ukraine. After brainstorming with our fellow Ukrainian exporters, we have realized that we have to start monitoring online tendering platforms like the EU’s TED. We have not yet had any successful bids, but we are confident that investing in this learning curve will position us as a key private sector authority on foreign tenders in Ukraine, especially when it comes to high-value, high tech exports from Ukraine.”