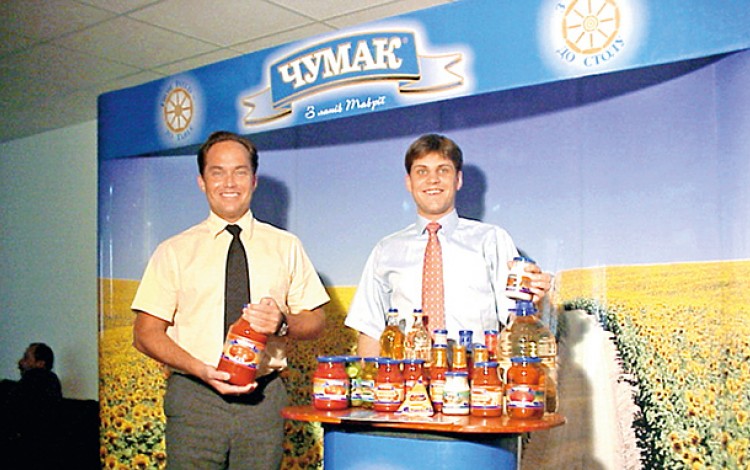 If you live in Ukraine, the chances are you have some Chumak products in your kitchen. The company’s ketchups, sauces, fruit juices, pastas and sunflower oils are ubiquitous items in supermarkets and convenience stores across the country, enjoying a level of brand recognition among Ukrainian consumers similar to many top international corporations. Named after the iconic Ukrainian salt traders (‘chumaks’) of the early modern period, this quintessentially Ukrainian brand was actually founded by two enterprising young Swedes who came to Ukraine in the early years of independence with big ambitions and a readiness to take risks in what was at the time an almost totally undeveloped market. Their gamble paid off, paving the way for what was to become one of the country’s biggest culinary success stories and an ongoing advert for adventurous international investment in Ukraine.

Swedes Johan Boden and Carl Sturen were both in their 20s when they first arrived in Ukraine in the mid-1990s. After a number of initial forays into the embryonic post-Soviet Ukrainian agricultural sector, they eventually identified a suitable site for a production facility in the Kherson region town of Kakhovka. The two Swedish entrepreneurs were then able to secure financial backing from Swedish industrialist Hans Rausing of Tetra Pak fame. The Chumak brand premiered in 1996 and quickly gained a strong foothold among Ukrainian consumers, with early fans including the then-President of Ukraine, Leonid Kuchma.

Over the intervening nineteen years, the company has consolidated its position as a major national brand with significant international market penetration throughout the former USSR and a growing presence in Europe. In 2008, Swedish investment company East Capital and Ukrainian investment bank Dragon Capital bought out Mr. Hausing’s stake in the company, becoming the major Chumak shareholders. Despite this rise from agricultural startup to international corporate entity, the company’s head office is still located in rural Kakhovka in southern Ukraine, which continues to serve as the nerve centre for the expanding Chumak commercial empire.

Speaking to Business Ukraine at Chumak’s Kyiv office, the company’s Managing Director Konstantin Shevchenko explains how Chumak has remained close to the company’s roots, maintaining cooperation with local agricultural contractors in southern Ukraine, many of whom have been working as suppliers for fifteen years or longer. This long-term approach to building partnerships fits well with the Chumak slogan: ‘from field to table’.

While sourcing core ingredients locally is a nod to more traditional agriculture, Chumak has also earned a reputation for its innovative approach to production. The company has enjoyed associations with innovation ever since its inception, even helping the Ukrainian authorities to draw up consumer standards for ketchup products in the 1990s when no such standards existed. Chumak was the first Ukrainian company to offer preservative-free sauces on the domestic market, and has been behind a series of culinary firsts for Ukraine, continuing to diversify its range of products as Ukrainian consumers became more sophisticated and new producers entered the market.

The company recently launched Ukraine’s first yellow ketchup – a novelty that plays on local perceptions of yellow tomatoes as being particularly tasty and nutritious. This unconventionally coloured ketchup is very much in line with the Chumak tradition of surprising consumers with new culinary creations. “Our strategy is to provide unique and innovative products targeting specific consumer segments of the market. For example, a couple of years ago we were the first company to introduce kids’ ketchup to the Ukrainian market, in direct response to consumer research which showed that children like ketchup with their meals but many parents have health concerns about traditional ketchups. This helped us to gain market share while consolidating our reputation for innovation,” Mr. Shevchenko comments.

The Chumak range of products continues to expand beyond the core sauce segment, and now includes a number of fruit juices and fruit smoothies designed to appeal to schoolchildren looking for a convenient and healthy snack. “From being primarily a food supplement producer, we are now moving towards being a ready-to-consume healthy food producer,” says Mr. Shevchenko.

Exports currently account for around 20% of Chumak’s total sales, with the bulk of these exports going to the former Soviet republics. Chumak has been among the many Ukrainian companies to suffer as a direct result of the trade barriers imposed over the past year by the Russian Federation on Ukrainian imports, but elsewhere in the ex-USSR the picture is rosier. Chumak remains a market leader in the Baltic States, and has significant market share in many of the Central Asian republics, while enjoying number one ketchup brand status in Belarus.

Chumak also exports to North America and to a number of EU member states, with a growing presence in central European countries such as Hungary and Poland. Agricultural producers are widely tipped to be among the key beneficiaries of Ukraine’s EU Association Agreement, which is due to come into full effect in January 2016, but senior management at Chumak is not expecting to see any immediate impact on the company’s exports to the EU. “In the short-term, we are not over-optimistic that the Association Agreement will lead to any radical changes for Chumak’s position in EU markets. There will clearly be new opportunities resulting from this agreement, but our position as a producer of fast-moving consumer products is not as simple or straightforward as trading in commodities. We need to consider a wide range of factors such as meeting consumer expectations in terms of packaging, branding, positioning and marketing. Each individual EU market needs to be carefully analyzed and studied in its own right. We are currently working to become a bigger player in EU markets, but we expect that it will take years rather than months before we see significant progress,” concludes Mr. Shevchenko.