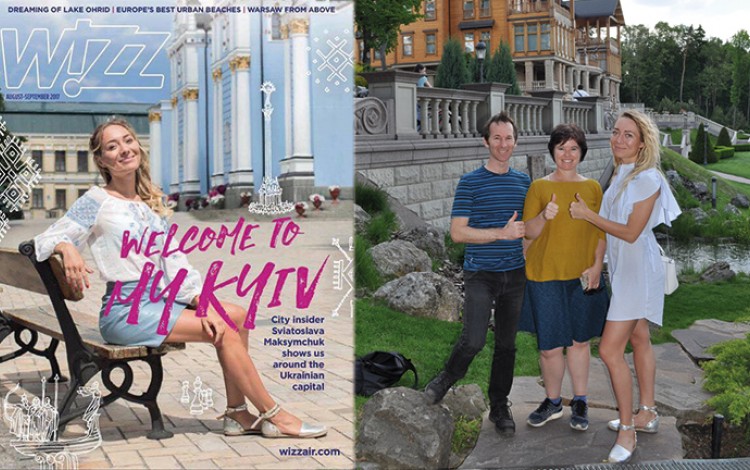 About the interviewee: Sviatoslava Maksymchuk is the owner of Kyiv Friendly Tours (right) and was the cover page star of the August-September 2017 Wizz Air inflight magazine focusing on Kyiv tourism (left)
Business Ukraine magazine

When airline Wizz Air recently decided to make Kyiv tourism the main feature story of their inflight magazine, the search for a suitable cover page icon did not take long. Sviatoslava Maksymchuk, who owns and runs the aptly named ‘Kyiv Friendly Tours”, was the obvious choice. Already something of a social media star for her fun and funky coverage of Kyiv tourism, Ms. Maksymchuk is now a Kyiv cover girl in every sense. Her rise epitomizes the post-Maidan growth of a hip and happy Kyiv tourism trade reflecting the city’s newfound swagger. “I guess it is every girl’s dream to be on a magazine cover,” she tells Business Ukraine magazine. “At first I thought it was a joke. Now I feel very lucky but at the same time responsible for representing Kyiv in front of a multimillion audience. Friends and family message me with photos of the magazine and I feel blessed.”

Ms. Maksymchuk first entered the tourism trade in 2014. A passionate Kyivite herself, she was inspired by the revolutionary changes taking place in the country and wanted to share her enthusiasm for the Ukrainian capital with the trickle of tourists who were then coming to Ukraine in the wake of the Euromaidan Revolution. From the very start, she sought to offer personalized tours and tried to give guests a glimpse of the real Kyiv. This infectiously bubbly and engaging approach was a million miles away from the scripted scenarios and textbook banalities more commonly associated with traditional Ukrainian tour guides. Within months, she found herself gaining a trendsetter reputation within the industry as post-revolutionary Kyiv shed its Soviet shadows and emerged as Europe’s latest hipster capital.

What started out as a hobby very quickly became a serious startup business. “In 2015 the number of tourists contacting us was still quite low. There was a tangible sense of fear among foreigners who were looking at possible tours of Kyiv. They expected it to be a warzone,” she recalls. “By 2016, I began to get the sense that the sector was on the verge of a boom. This growth has continued to accelerate. At times during the 2017 summer season, my agency has had seven tours of the city underway simultaneously.” Ms. Maksymchuk says there has been a significant increase in tourist numbers over the past few months, with many guests citing the May 2017 Eurovision Song Contest as one of the reasons they first became interested in Kyiv as a potential destination. She has also noted a sharp rise in Indian visitors following the relaxation of Ukrainian visa regulations earlier this year.

Ms. Maksymchuk originally led most of her agency’s tours herself, but the Kyiv Friendly Tours team has expanded alongside the growth of the business. She has also branched out, teaming up with partners to establish a Kyiv Guide School to train English-language tour guides with the requisite communication skills and historical knowledge to keep tourists coming back for more. Since the school’s launch in November 2016, it has produced 36 graduates. This total includes numerous veteran tour guides eager to brush up on their knowledge and learn from one of the local tourism industry’s most talked-about innovators. Ultimately, Ms. Maksymchuk would like to see greater state regulation of the Kyiv tourism trade in order to protect it from charlatans and scammers. “Kyiv tour guides are currently unlicensed and there is inevitably an element of risk for tourists. Regulating the industry and issuing licenses would improve tourist safety and boost the reputation of the country as a tourism destination.”

The tour portfolio developed by Ms. Maksymchuk covers a wide variety of themes ranging from ultra-contemporary to picture postcard traditional. She regularly guides guests through the venerable halls and ancient chambers of Kyiv’s palaces and cathedrals, but was also one of the first to offer street art tours of the city’s expanding mural collection. Her nightlife tours, involving pub and bar crawls through nocturnal hipster Kyiv, have proved particularly popular. Culinary tourism and wine-tasting trips have earned rave reviews, while some of her tourists have been able to learn traditional Ukrainian musical instruments or try their hand at folk pottery. As far as Ms. Maksymchuk is concerned, there really are no limits. Her only concern is to avoid catering to the unsavory side of the Kyiv tourism market. “Our mission is to introduce audiences to the diversity and richness of contemporary Ukraine. Stereotypes about Chornobyl and sex tourism are so outdated,” she says.

The next target on Ms. Maksymchuk’s business plan is to develop partnerships with tour operators and begin offering entire package options to tourists. She would also like to expand beyond the confines of the Ukrainian capital by introducing regular tours to Lviv and Odesa. Other appealing destinations across Ukraine include Bukovel in the Carpathian Mountains and the iconic “Tunnel of Love” in Rivne Oblast, which Ms. Maksymchuk says is particularly popular among Chinese tour operators. She is confident that her upbeat approach and international appeal will translate into success anywhere in the country, and is happy to be in a position where she can have a positive impact on perceptions of Ukraine. “Tourists tend be quite frank and sincere,” she reflects. “They often tell me that Ukraine’s international image is dominated by war and crisis, and are surprised by how friendly and stylish the country actually is. It feels good to be offering an alternative vision.”