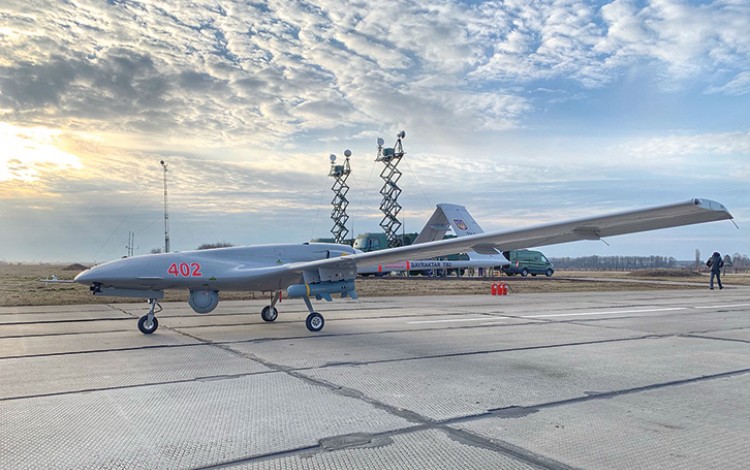 Turkish-Ukrainian defense sector cooperation received a boost in August 2019 with the launch of a new joint venture that aims to build on the two countries’ respective aerospace industry strengths. Newly formed company Black Sea Shield will focus on the development of unmanned aerial vehicles (commonly known as UAVs or drones), engine technologies, and guided munitions.

The joint venture brings together Ukraine’s UkrSpetsExport, which is part of the country’s state-owned military manufacturer UkrOboronProm, and Turkish drone specialist Baykar Defence, in what is the first international partnership of its kind for both parties. Black Sea Shield will develop drones and other aerospace-related technologies for use by the Ukrainian and Turkish militaries. Initial projects include the Akinci heavy strike combat drone, which is set to come with a 20-meter wingspan and the ability to carry over a ton of ordinance thanks to the craft’s powerful Ukrainian engines.

The establishment of Black Sea Shield is the latest stage in a developing relationship between Ukraine and Turkey in the defense sector, and came following several years of talks over the supply of Baykar Defence drones to the Ukrainian Armed Forces at a time when other countries refused to supply Kyiv. This led to the sale of six Bayraktar TB2 drones to Ukraine, with delivery taking place during the first few months of 2019. Since the drones arrived in Ukraine, a delegation of 40 Ukrainian military personnel has been receiving training in Istanbul on every aspect of the Bayraktar TB2 model, from piloting to maintenance.

Baykar Defence CEO and Black Sea Shield Chairman of the Board Haluk Bayraktar says that it was during the course of long-running talks over the Bayraktar TB2 deal that the numerous synergies between the Turkish and Ukrainian aerospace industries first became apparent. “Ukraine has a huge history in aviation,” he offers, pointing to the country’s ties to early flight pioneers such as the Kyiv-born father of modern helicopters, Igor Sikorsky, and the strong manufacturing traditions of Ukraine’s flagship aviation brand Antonov.

Bayraktar identifies Ukraine’s strength in the production of turbine and piston engines as a particular advantage as Turkey looks to improve its capabilities in this area. “There are many complementary areas of the Turkish and Ukrainian aerospace industries and this creates a solid basis for cooperation. Such kinds of partnership are particularly effective in the high tech sector, and will allow us to develop concepts and projects that bring benefits to both countries.”

The new Ukraine-Turkey joint venture Black Sea Shield will be based in Turkey, where Baykar Defence has the largest UAV manufacturing facilities anywhere in Europe and the Middle East. Since its foundation as a tech startup in the early 2000s, Baykar Defence has expanded from an initial team of just seven to today’s workforce of 700.

Bayraktar hopes partnership with Ukraine will help the company reach the next level in its development and remain at the forefront of the rapidly evolving military drone sector of the aviation industry. “The focus of our strategy is to make sure we are in a position to be competitive in the future,” he offers. “Partnership with Ukraine is crucial for us in a sector where the future is particularly bright.”