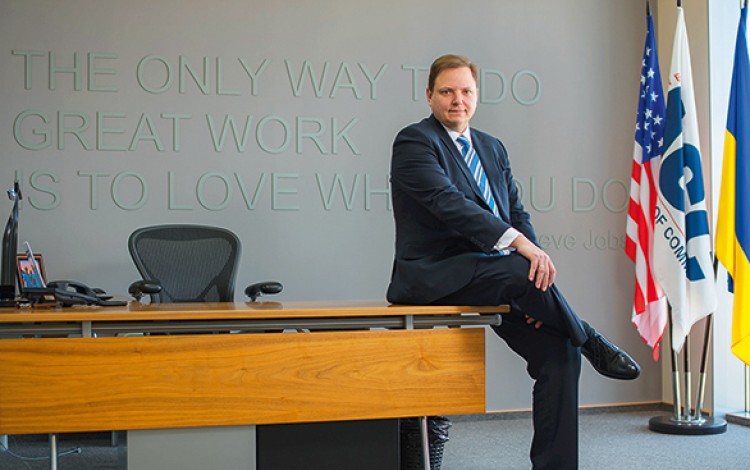 About the interviewee: Andy Hunder is the President of the American Chamber of Commerce in Ukraine
Business Ukraine magazine

Perched high above the hustle and bustle of downtown Kyiv, the offices of the American Chamber of Commerce in Ukraine (ACC) are all about transparency. Full-length glass partitions separate the various individual meeting rooms and conference areas, creating a sense of accessibility and openness that cuts to the core of an organization attempting to aid Ukraine’s embrace of contemporary international business values. This impressive open-plan office space occupies an entire floor in one of Ukraine’s most modern business centers – a status befitting the ACC’s prominence in the country and its historic role as the voice of the international business community in Ukraine for the past quarter of a century.

Throughout the month of May, the ACC team was even busier than usual, with staff occupied by plans for a gala party to mark 25 years in Ukraine. The complexity of these twenty-fifth anniversary preparations reflected the sheer scale of the organization’s reach in Ukraine. With well over a thousand VIP guests drawn from the country’s political, diplomatic and business elites expected to attend the anniversary evening at Kyiv’s prestigious and suitably cavernous Mystetskiy Arsenal venue, the event involved dozens of corporate sponsors and partners. The man charged with overseeing these party preparations was American Chamber of Commerce in Ukraine President Andy Hunder, who recently marked his own personal anniversary of two years at the ACC helm.

It has been a rollercoaster past twenty-four months for Mr. Hunder. He took over at the Ukrainian branch of the ACC in spring 2015, at a time when Ukraine was facing some of the greatest existential challenges in the country’s long and troubled history. Crimea was firmly under Kremlin occupation and Russia’s hybrid war continued to smolder in the east of the country, resulting a steady flow of daily casualties. Meanwhile, the Ukrainian national currency had just experienced a record devaluation and the economy was in apparent freefall. It was not a particularly advantageous moment to be taking on the presidency of Ukraine’s longest-running international chamber of commerce. Mr. Hunder says he was undaunted by the situation he encountered in early 2015. For him, it was all about the opportunity to make a meaningful contribution at what he sees as a decisive period in the country’s post-Soviet transition.

“When the job first came up in late 2014, I felt that the time was right,” he says. “Given the historic changes taking place in the country and within government circles, I saw that the Chamber had the opportunity to help lay the foundations for the entire economy and dramatically improve the business climate.” He believes these developments could have a profound effect on Ukrainian society as a whole, especially by paving the way for desperately needed investment inflows. “The future is there for the taking,” says Mr. Hunder. “Foreign direct investment is the key to driving Ukraine’s transformation forward. FDI is the only thing that can dramatically increase the country’s GDP. If we can boost FDI through our efforts, then it will have a snowball effect throughout Ukraine on infrastructure, services, and every area of the economy. The coming few years could end up being a decisive period for Ukraine’s development.”

All this is a far cry from the kind of networking activities that traditionally serve as the everyday focus for most international chambers of commerce elsewhere in the region. The expanded presence of the ACC in Ukraine reflects both the prominent role played by the international business community in Ukraine’s post-Soviet journey, and the efforts of Mr. Hunder’s predecessor as Ukraine’s ACC President, Jorge Zukoski. Prior to stepping down in New Year 2014, Mr. Zukoski spent almost 15 years in charge of the American Chamber of Commerce in Ukraine, building the organization up from modest beginnings to its present size, while also successfully establishing it as a stakeholder in the country’s economic evolution. He was a ubiquitous figure on the Ukrainian business circuit and a bridge-builder who proved able to establish working ties with successive Ukrainian governments during a period of considerable political turbulence. “I inherited a fantastic team from Jorge,” says Mr. Hunder. “I’m personally very grateful to him, as is the business community in Ukraine.”

Mr. Zukoski’s legacy is an organization with an exceptionally large team and more than 600 member companies, including many of the largest international corporations present on the Ukrainian market. He also bequeathed a culture of mutually beneficial cooperation between business and government that Mr. Hunder has embraced enthusiastically. “We remain very much focused on relationships,” he says. “Our lobbying is all about having a dialogue with the government. As an organization, we seek to build the right relationships with our members, with stakeholders, and with government.”

Changes in Ukrainian government culture since the 2014 Euromaidan Revolution have helped to facilitate this dialogue. Mr. Hunder says the old practices of selling influence are giving way to greater accessibility and interaction. “There used to be middlemen offering to set up meetings with government ministers, but times have changed. Today, I can send a message to virtually any senior minister figure via social media and can expect to receive a response within a few hours. There is no guarantee that it’ll be a positive response, but the dialogue is there.”

The post-Euromaidan arrival in government of experienced corporate players has also helped to improve communication, with many of those signing up for state service having previously had direct experience of the ACC during their private sector careers. “This has helped us to build up and maintain a sense of trust in our dealings with the government,” the ACC Ukraine President comments.

The credibility of the ACC in Ukraine also rests on the professional reputations of the people who make up the membership. The Chamber operates via a seasoned board of directors alongside a series of specialized committees featuring many of the country’s top professionals in their respective fields. International ties bring added weight. Mr. Hunder was recently elected Treasurer of the AmChams in Europe, an umbrella organization for American Chambers of Commerce from 42 countries throughout Europe, bringing the ACC in Ukraine on to the AmChams in Europe Executive Committee. The organization also enjoys a special link with the US Chamber of Commerce, which Mr. Hunder describes as ‘probably the most powerful lobbying organization in the world’.

Mr. Hunder is particularly well qualified to reflect on the changes taking place in contemporary Ukrainian society. The son of Ukrainian immigrants who arrived in London following WWII, he grew up with a passion for all things Ukrainian, spending his teenage years studying at a Ukrainian seminary in Rome before beginning his expat career as a TV presenter in 1990s Kyiv. Mr. Hunder speaks of those early independence years with unmistakable fondness, recalling the embryonic international business community of the time and the early steps of the newly independent state. His first big break came in 1997 when he was invited to establish the communications department of Ukraine’s first major mobile phone operator, UMC.

Mr. Hunder left Ukraine in the mid-2000s when his Ukrainian wife took up a posting at the Ukrainian Embassy in his native London. While back in the UK, he continued to maintain both professional and cultural ties with Ukraine, setting up London representative offices for some of Ukraine’s leading law firms while overseeing operations at the Ukrainian Institute on a voluntary basis.

It was in this role at the Ukrainian Institute that Mr. Hunder first rose to public prominence as an unofficial spokesperson for Ukraine. There is a good chance that if you saw any international English-language TV news coverage of Ukraine’s 2013-14 Euromaidan Revolution, you will have seen Mr. Hunder providing expert commentary. As one of the very few English-speaking Ukraine experts based in London at the time, he quickly became the go-to man for media commentary about the crisis. By the time President Yanukovych fled from office in late February 2014, Mr. Hunder had given over 100 live TV interviews and had become a familiar face to Ukraine watchers all over the world. The experience helped to establish his credentials as a media-savvy personality with the requisite gravitas to represent the country on the international stage. He says it also highlighted the deficit of English-language information about the country, a problem that left Ukraine uniquely vulnerable to the Russian information attacks that began during Euromaidan and escalated as the Kremlin hybrid war unfolded in Crimea and across eastern Ukraine.

Now back in Kyiv, Mr. Hunder says the ACC can help to counter this information deficit by providing the kind of balanced and credible insights into today’s Ukraine that the international community currently lacks. In an information environment overflowing with bad news and negative perceptions, he believes the ACC’s corporate success stories and policy wins can help to provide a valuable counterweight and provide a more rounded picture of the realities on the ground. “People typically come to us because they want to hear the voice of the business community. That’s what we try to provide,” he says. “At present, negativity tends to overshadow everything and this is a real issue. We try to avoid anything resembling spin and just stick to the facts, but we have plenty of good examples of companies operating very successfully here.”

As he prepared to mark the twenty-fifth anniversary of the American Chamber of Commerce in Ukraine, Mr. Hunder told Business Ukraine magazine that in an ideal world, he would like to see the ACC role moving closer to that of other ACC organizations in more developed European markets. “I’m probably in danger of talking myself out of job, but it would be great to have a more stable business environment where there was no longer any need for the chamber to take on such a prominent role in policy recommendations.” Nevertheless, he identifies the ACC’s contribution to building a better business environment as the Chamber’s most important contribution. “We are currently on a journey and the green shoots are beginning to appear above the soil. This is a pivotal moment for Ukraine and the ACC has a role to play.”

This process has particular meaning for Mr. Hunder, given his lifelong investment in Ukraine. The wall behind his desk bears the Steve Jobs quote: “The only way to do great work is to love what you’re doing.” It is a sentiment that he has carried over into his work as President of the American Chamber of Commerce in Ukraine. “I’ve loved Ukraine since childhood, and I’m passionate about business, so it’s the best of both worlds,” he reflects. “This role has become part of my life. The business community and investors are the ones who can take the country forward. If we can create the right environment for business here in Ukraine, the consequences for the entire country will be massive.”