BELGIAN AMBASSADOR: "So many blank spots in European knowledge of Ukrainian history" 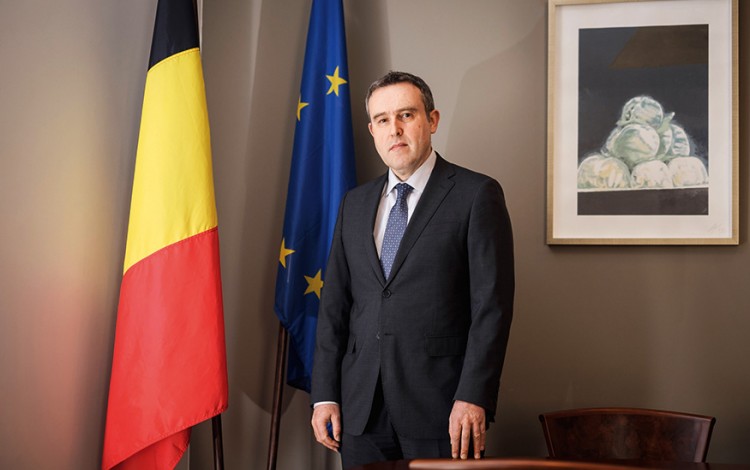 About the interviewee: Luc Jacobs is the Belgian Ambassador to Ukraine
Business Ukraine magazine

It is standard practice in the diplomatic service for future ambassadors to have a preparatory period between appointment and arrival at a new post, but few diplomats have experienced the rollercoaster of emotions that awaited Belgian Ambassador to Ukraine Luc Jacobs as he prepared for his time in Kyiv. Ambassador Jacobs learned of his posting to Ukraine in January 2014, just as street protests against the Yanukovych government in the Ukrainian capital were turning deadly. By the time he arrived in Kyiv in late July 2014, Ukraine’s protest movement had become a revolution and Russia had responded by annexing Crimea and sparking war in the Donbas. “I saw it as a professional challenge, but I cannot hide the fact that there were tense moments as I watched events unfolding. It was shocking to witness the brutality with which Crimea was taken,” he recalls.

Prior to his posting in Ukraine, many of Ambassador Jacobs’s previous roles had been within Belgium’s Permanent Representation to EU structures in Brussels. He regards this as having been in many ways the ideal preparation for his work in Kyiv at a time when Ukraine seeks to take its relationship with the European Union to an entirely new strategic level. “You could say I have a European professional profile and this is where the heart of Europe beats right now. What we are doing in Ukraine is quintessentially European so I feel quite comfortable in this context,” he reflects.

This extensive insider experience of the EU provides Ambassador Jacobs with an informed vantage point from which to assess Ukraine’s progress on the road towards greater European integration, while also offering a broader perspective colored by first-hand knowledge of the 28-nation European Union’s own evolution. He is quick to recognize the scale of the task facing today’s Ukraine, but argues the country is making considerable progress and could actually benefit from following the EU’s already well-worn legislative pathway. “Ukraine has a lot of ground to make up but the country also enjoys all the natural advantages of the latecomer. Kyiv is now in a position where it can take advantage of the end product without going through five decades of progress in order to get there.”

At this stage, he believes there is no reason to be overly downbeat about the pace of the integration process. “An enormous amount of work has already been done in what is an extraordinarily short space of time. Ukraine rightly boasts about the more than one hundred pieces of legislation the country passed in order to secure visa-free EU travel. This shows the potential when the requisite political will is in place. The big challenge now is to make sure changes that occur on paper are fully implemented and there is no backsliding.”

Ambassador Jacobs sees the two sides of the EU-Ukraine relationship as both being on something of a learning curve. While media attention tends to focus on Ukraine’s efforts to adapt to the expectations emanating out of Brussels, he acknowledges that Ukraine’s EU partners are also entering relatively uncharted territory. “It is a learning experience on all sides. Europeans are in many ways playing catchup when it comes to understanding who Ukrainians are and what the Ukrainian nation is. There are so many blank spots in our knowledge when it comes to Ukrainian history and Ukrainian statehood. The key point to understand is that the story does not begin in 1991. There is a constant nation-building thread that stretches back for centuries.”

Greater EU appreciation of Ukraine’s position must primarily come from Ukraine itself, he argues. “This is why it is so important for Ukraine to tell its own story to the outside world. It is an uphill battle against all sorts of negative news, fake news, and distorted news. Ukraine must resist the temptation to engage in counter-propaganda, but it currently has a number of factors in its favor as it seeks to get its message out. Ukraine is now on the EU radar more than at any other time in the country’s history. The tragedy and drama of the past four years have been regular features in the European media, but Ukraine is also starting to appear in a more positive light. The success of the Eurovision Song Contest in Kyiv in May 2017 was a particularly striking example of how Ukraine has the tools to present itself to international audiences. Other potentially attractive public diplomacy assets include Ukraine’s rich culture and wonderful gastronomy.”

When it comes to public diplomacy, Ambassador Jacobs has had his own positive experiences in Ukraine based on rising levels of awareness about the previously little known role played by Belgium in the industrialization of Tsarist era Ukraine. In the late nineteenth and early twentieth centuries, Belgian industrialists and investors were among the most prominent groups active in Ukraine at a time when it was fast emerging as the industrial engine of the Tsarist Empire. At the time, most of Ukraine’s major cities had a significant Belgian presence, a fact that was evident in the presence of eight Belgian consulates across the country. The Bolsheviks almost completely whitewashed this Belgian legacy, with the Communist authorities later claiming Ukraine’s industrial strength as a largely Soviet achievement.

However, in recent years, Ukrainian historians and local researchers have begun piecing together Ukraine’s Tsarist era Belgian connections. The scale of the resulting picture has surprised many and provided Ambassador Jacobs with some very welcome talking points. “This part of Ukraine’s history was largely unknown until relatively recently, but there is no doubt that greater awareness has helped to put Belgium on the map among Ukrainian audiences. What we are discovering now flatly contradicts the accepted wisdom that Stalin was responsible for industrializing Ukraine. Instead, the Belgian role is becoming more widely acknowledged. Ukraine was the Eldorado for European industrials at that time. They laid the foundations for today’s Ukrainian heavy industries, and Belgian involvement was central to the entire process.”

Interest in the era is now a common feature of ambassadorial visits to destinations throughout Ukraine. Ambassador Jacobs says that wherever he goes in the country he now encounters people who want to share tales of local Belgian involvement or take him to visit surviving sites. While this is an interesting and engaging part of his diplomatic duties, Ambassador Jacobs is keen to point out that Victorian era industrialists were not necessarily models of philanthropy. Nevertheless, he sees the story of Belgium’s participation in Ukraine’s industrialization as a welcome counterweight to Soviet mythmaking and a valuable point of reference for the country as it seeks to integrate economically once again with the rest of Europe. “The period should certainly not be idealized,” he says. “It may not have been the wildest or harshest period in the development of capitalism, but we should be careful about romanticizing this industrialization process. However, it is encouraging to observe greater interest in the subject and to note the growing recognition of Ukraine’s historic ties to Belgium and the rest of Europe. The fact that Ukrainians have begun to explore this previously forgotten theme with such enthusiasm has been my most exhilarating experience in public diplomacy.”