COMING SOON: Ukrainian Davos in Kaniv next month seeks to initiate a revolution of values 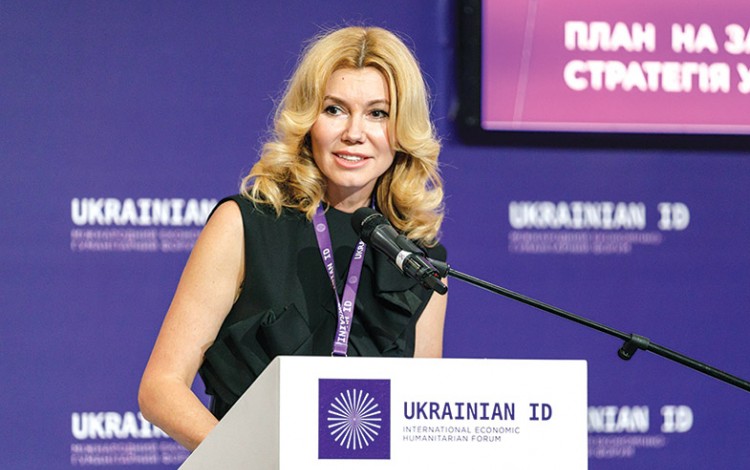 About the interviewee: Nataliia Zabolotna is the CEO and founder of the Ukrainian ID international economic and humanitarian forum
Business Ukraine magazine

Ukrainian society has witnessed its fair share of revolutions in recent years, but Nataliia Zabolotna is looking to initiate one more. This year’s edition of her Ukrainian ID Forum, which takes place on 7-8 June in Kaniv, will focus on the idea that Ukraine needs a full-scale revolution of values. For Zabolotna, this means an entirely new approach to core ideas such as gender equality, national identity and social inclusion. It also means investing in the next generation of Ukrainians and reversing the neglect of humanitarian and cultural issues that she sees as responsible for many of the deeply entrenched problems facing Ukrainian society today. Zabolotna says Ukrainians have spent decades distracted by political turmoil while their country has fallen further and further behind its European neighbors. The time has now come, she argues, for a Maidan of the mind.

This will be the second Ukrainian ID International Economic and Humanitarian Forum. It is set to attract an eclectic collection of diplomats, politicians, journalists, businesspeople and thinkers, who will gather for two days in the picturesque town of Kaniv, overlooking the Dnipro River in Cherkasy Oblast 120km south of Kyiv. Launched in summer 2018 amid considerable fanfare, the event’s unabashed ambition and international pretentions soon attracted flattering comparisons, with many in Kyiv referring to it as “The Ukrainian Davos”. Such lofty talk may seem somewhat premature for what remains a fledgling forum, but it also speaks volumes about Natalia Zabolotna’s past record as an innovative influence in Ukraine’s cultural life.

Zabolotna first appeared on the Ukrainian cultural radar at the turn of the millennium when she took charge of Kyiv’s iconic Ukraine House, which at the time was still more commonly associated with its former Soviet-era role as the Ukrainian capital’s Lenin Museum. By utilizing the considerable but largely untapped kudos of Ukraine’s emerging contemporary art scene, Zabolotna was able to reshape the venue’s public profile and align it with the changes taking place elsewhere in Ukrainian society as the country lurched towards the national awakening of the 2004 Orange Revolution.

Zabolotna’s profile continued to rise in the afterglow of the revolution. She received an invitation to manage the development of the Art Arsenal complex, a flagship project personally championed by newly elected Ukrainian President and Orange Revolution hero Viktor Yushchenko as part of his bid to redefine the way Ukrainians saw themselves. Zabolotna’s task was to reinvent the sprawling former military factory and turn it into a symbol of Ukraine’s national cultural revival. She was to prove so successful in this undertaking that in 2011 Ukrainian newspaper “The Day” named Zabolotna “Person of the Year”, an unheard-of achievement for somebody active in the largely neglected cultural sphere of Ukrainian public life. Such was Zabolotna’s status that when she finally lost her position at Art Arsenal in 2016 in politically charged circumstances, her removal sparked a lively national debate.

The choice of Kaniv for Zabolotna’s latest venture is no accident of geography. This small Ukrainian town occupies a central place in Ukrainian folklore as the last resting place of national bard Taras Shevchenko, making it a symbolically potent location for meditations on the country’s future direction. Kaniv is also home to an impressive river port terminal, a vast but incomplete conference center, and the country’s largest helicopter airport, all relics of a Yanukovych era bid to transform the town into a model of regional rejuvenation. Zabolotna claims that fugitive ex-president Viktor Yanukovych actually commissioned these white elephants with something very specific in mind. He allegedly planned to welcome Vladimir Putin and other assorted post-Soviet presidents to Kaniv for the ceremonial signing of Ukraine’s ascension to the Kremlin-led Eurasian Union. According to Zabolotna, the idea was to host the event on 9 March 2014, the two hundredth anniversary of Taras Shevchenko’s birthday. This fateful event never took place. Instead, Ukraine’s Revolution of Dignity intervened, with Yanukovych fleeing to Russia mere weeks before the ceremonials were supposedly scheduled. We will never know if this entertaining tale is true, but as Zabolotna herself points out, the fact that Yanukovych invested so much in Kaniv infrastructure projects is testament to the town’s spiritual potency as a symbol of the Ukrainian nation. “Even someone like Yanukovych recognized Kaniv’s power to provide him with a veneer of legitimacy,” she notes.

The largely unused infrastructure assets inherited from the Yanukovych era now serve a practical purpose in making today’s Kaniv an ideal candidate for the kind of regional reinvention Zabolotna hopes to inspire throughout rural Ukraine. Problems of economic decline, labor migration and depopulation plague the Ukrainian countryside, with towns like Kaniv typically suffering from a host of associated social ills. However, the availability of modern transport connections, combined with the town’s Shevchenko associations, offer Kaniv a lifeline and make it a potentially appealing tourism destination. For Zabolotna, promoting tourism is one of the main aims of the forum and the best bet for the transformation of the local economy. “There is a 20 million-strong Ukrainian diaspora to appeal to, but we need to provide them with the kind of services that will make them visit Kaniv again and again,” she says, adding that the town has already experienced a small spike in tourist numbers following the media coverage generated by last year’s inaugural forum. If Kaniv can build on its tourism advantages, Zabolotna argues, it could serve as a model for other regional towns to follow.

The primary focus of the forum remains the future trajectory of Ukraine. Once again, we return to Zabolotna’s idea of a revolution of values. She argues passionately and at length that Ukraine is now paying the price for having ignored the country’s humanitarian and cultural development consistently throughout the past quarter of a century. This has fueled a climate of social alienation, she says, stunting the nation’s growth and ultimately making it possible for Russia to engineer the current military conflict in the east of the country. “The war teaches us a painful lesson that if we as a nation ignore our own cultural development, somebody else will exploit the void this creates,” she says. “Separatism breeds when people feel no attachment to the country they live in and have no sense of belonging to a wider society. This makes them particularly vulnerable to outside influences.”

The agenda of the forum will be almost as diverse as the list of participants. Issues up for discussion include everything from the role of women in Ukrainian society to the need to invest in the country’s architectural heritage. Zabolotna is aghast at the marginalization of women in Ukrainian politics and business, arguing that until there is radical change on this front, the country will continue to lag behind its European neighbors. Similarly, she sees the crumbling condition of Ukraine’s castles and palaces as a vivid metaphor for the country’s wider neglect of its cultural inheritance. “Ukraine must be one of the only countries in Europe where people still think investing in culture is not profitable. We need to change this mindset entirely. Investing in culture can create a thriving and very lucrative tourism industry. More importantly, it is can also be a significant factor in fostering greater social cohesion.”

Zabolotna readily recognizes that her anticipated revolution of values is a wildly ambitious notion. However, she believes the recent landslide election victory of establishment outsider and political novice Volodymyr Zelenskiy in the country’s presidential vote reflects a hunger for drastic change that is very much in line with her own talk of revolutionary shifts. “In essence, Zelenskiy’s win was a massive protest vote,” she says. “Ukrainian society was rejecting the entire status quo of the past twenty-five years and sending a message that they want to try a completely different approach. The challenge we face now is identifying what this new approach should look like.”