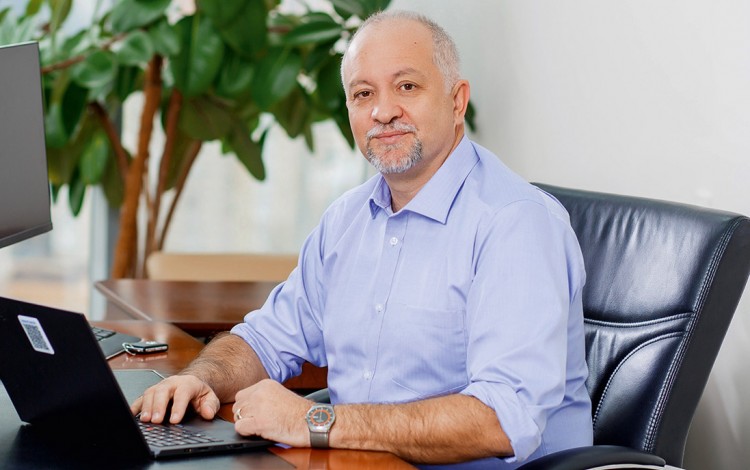 About the interviewee: Ismet Yazici is the CEO of lifecell
Business Ukraine magazine

Telecoms executive Ismet Yazici has an engaging vision of a future Ukraine where nobody knows anybody else’s phone number. The CEO of lifecell sits in his twelfth floor Kyiv office overlooking the expanding panorama of the Ukrainian capital city and explains that individual phone numbers will be among the primary victims of a digital revolution that is fast changing the fundamentals of how we communicate. “It’s happening already,” he says with a wry smile. “I wanted to call my wife earlier today. She was not available on BiP messenger, so I decided to call her directly on the phone, but I realized I had forgotten her number! This actually made me happy. If it’s happening to me, it’s happening to everybody.”

From Mobile Phones to Digital Devices

The digital revolution in the communications sector certainly appears to be genuinely universal in scope and more profound than anything the world has seen since the original advent of mobile telephones in the late 1990s. These changes are currently forcing telecoms companies to rethink their entire business models. It has pushed them to expand beyond the narrow confines of mobile telecommunications services and embrace a broader understanding that incorporates everything from payments and other financial services to a dizzying range of lifestyle tools. For many companies, this has meant developing in-house apps and platforms in order to prevent tech companies from monopolizing the monetization of initial investments made by the telecommunications providers themselves.

Mr. Yazici speaks passionately about the inexorable rise of The Internet of Things and explains it as something akin to an irresistible force driving the evolution of the telecoms industry. Since arriving in Ukraine in May 2017, has made it his goal to maintain lifecell’s position at the forefront of this process. This enthusiasm for innovation is particularly understandable when viewed from the perspective of Mr. Yazici’s role at the helm of a telecoms company seeking to overhaul a duopoly that has long dominated the vast but traditionally pedestrian Ukrainian telecoms market with still unavailable MNP service.

He believes the growing everyday roles of social media, apps, and smartphone convenience will organically erode many of the inbuilt advantages enjoyed by Ukraine’s deeply entrenched telecoms industry market leaders, and argues that the digital revolution offers a challenger operator like lifecell unique opportunities to overcome regulatory roadblocks and gain access to a more level playing field. “I came here to complete the transformation of lifecell into a fully digital operator. Within three years, the whole world will connect to each other via social media platforms and nobody will be asking you for your phone number anymore. These technical innovations will allow us to move forward in ways that the existing Ukrainian regulatory framework cannot. The biggest advantage of Ukraine’s current market leaders is the phone number dependency that limits choice and discourages people from calling other operators due to things like artificially inflated rates. In a few years, none of this will apply.”

The next major milestone on the horizon for the Ukrainian telecoms sector promises to be the launch of 4G services in early 2018. This development comes relatively soon after the long overdue unveiling of 3G services in summer 2015, a process that lifecell invested heavily in. The company’s 3G investment paid off, helping lifecell to cement its status at the forefront of the digital services segment. Unsurprisingly, Mr. Yazici plans a similarly prominent role for the company as 4G services roll out in Ukraine over two stages of planned tenders in early and mid-2018. “We are already the leader in data services for smartphone users in Ukraine. With the launch of 3G, we began to gain momentum as a company. We also began to offer subscribers our own products like BiP messenger, fizy music App, and lifebox cloud storage. With 4G, we will consolidate our leadership position in data technologies and products.”

He sees 4G as a platform for greater app penetration and further growth in the functionality of smartphones, with potentially far-reaching implications for Ukrainian society as a whole. “The move from 3G to 4G will see dramatic increases in mobile speed, but for people who primarily use their handsets to read newspapers and watch videos, the impact will not be particularly revolutionary. The real changes will occur for business users. As a company, we want to make life easier for the Ukrainian public and introduce maximum convenience. This is where 4G technology can play a big role. For example, we plan to introduce new smartphone payment and financial transaction services in 2018. This can make a huge contribution to the speed of transactions and have a positive impact on the general development of the Ukrainian economy. It is a great example of how technology can fuel economic growth and speed up everyday life.”

Mr. Yazici is only six months into his posting as lifecell CEO in Kyiv, but he arrived in Ukraine with regional insights garnered during a previous stint in Belarus. His time in Minsk provided some useful background to the general post-Soviet environment, but he argues that Ukraine stands out among the nations of the former Soviet sphere. “The most striking difference I notice between Kyiv and Minsk is in the people. In Belarus and most other CIS countries, people tend to put some distance between one another, especially when it comes to foreigners. In Kyiv, I get a sense of openness and dynamism. There are traffic issues and so forth, but the most important thing for me is that I see people laughing and smiling on the streets of the city as they go about their daily business. I am a hyperactive person and the ambience of today’s Kyiv suits me. You could call it love at first sight. In the lexicon of my industry, I would prefer to say that I have found the right frequency.”

This Ukrainian appetite for new ideas gives the Turkish CEO cause for optimism as he seeks to introduce further innovations to the domestic telecoms market. “Since arriving in Kyiv, I have developed a sense of Ukraine as an open-minded society of benefit-seekers who are ready to embrace change. This makes things ten times easier as we look to embrace the new world of telecommunications. We are already on the right track and have the necessary corporate speed to maintain our competitive advantage. When I look to the future, my confidence is increasing. As Ukrainian usage behavior changes, our time will come.”