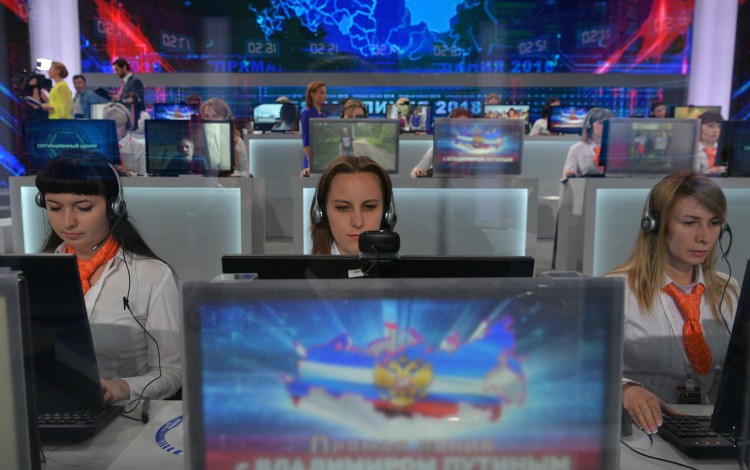 Since 2014, the outside world has become increasingly familiar with the concept of Russian information warfare. From the conflict in Ukraine to the Brexit referendum and the election of US President Donald Trump, international audiences have repeatedly come face to face with the Kremlin’s sophisticated multimedia arsenal of disinformation tools and diversionary tactics. What many do not realize is that Vladimir Putin’s infowar activities actually began almost twenty years ago, with Russian domestic audiences his first victims.

The early years of Putin’s presidency saw a concerted effort to muzzle independent Russian media and recreate the centralized editorial control of the Soviet era. This dominance of the domestic information space has gone on to play a crucial role in the Putin model of governance, allowing the Kremlin to carefully curate current affairs narratives while preventing dissenting opinions from gaining traction. Russia’s servile mainstream media landscape has also functioned as a convenient testing ground for many of the information warfare techniques subsequently deployed against international targets.

This weaponization of the Russian media failed to attract much international attention until the spring 2014 seizure of Crimea, when it suddenly became a major global security issue. The role of Russian disinformation in Donald Trump’s presidential campaign has generated additional interest in the Kremlin’s media strategies, with a whole new generation of journalists and commentators trying to identify hidden Russian influence operations and decipher Moscow’s true intentions. Few have made more of an impact than Kyiv-born American analyst and commentator Julia Davis, who has emerged as one of the most popular social media observers of Kremlin TV.

A native Russian speaker, Davis is the founder of Russian Media Monitor and a featured expert in Russian Disinformation with the Atlantic Council’s Disinformation Portal. Every day, she tweets out English-language translations of revealing Kremlin TV quotes to her tens of thousands of Twitter followers. These quotes often make it into mainstream Western media coverage of Russia, providing international audiences with additional insight into what the Kremlin is saying to Russian audiences. She spoke to Business Ukraine magazine about her media monitor role and explained why she believes unveiling the Kremlin’s domestic messaging can help awaken international audiences to the true intentions of Putin’s Russia.

Your social media coverage of Kremlin TV has proved very popular, with particular attention focused on what Russians are saying about President Trump. How has Russian media coverage of Trump fluctuated since his election in 2016?

Russian media coverage of Trump is twofold: he is portrayed as a weak and ridiculous amateur, but at the same time as a potentially useful tool of the Kremlin. There is no contradiction in this nuanced portrayal. The Russians exhibit affinity towards Trump solely for his destructive behavior towards the West, which suits Putin perfectly. Russian media, heavily dominated by the Kremlin’s mouthpieces, is consistent on one point: they believe Trump would give Putin’s Russia whatever it wants, if only he was not being constrained by other executive branches of the US government. They maintain the hope that Trump’s election will still pay off for Russia.

Have you been surprised by the reaction among American audiences to your coverage of the Russian media?

For the most part, American audiences were unfamiliar with the Russian media. They are often shocked by the openly anti-American sentiments displayed on Russian state television. I fully expected them to be shocked. This rude awakening was very necessary, since Putin’s Russia views us as an adversary to be fought and undermined every step of the way. The American public should have their eyes wide open in order to avoid falling prey to the ploys of our foes, foreign and domestic.

Some analysts compare the Kremlin-controlled mainstream Russian media to the kind of politically partisan coverage provided by individual US networks such as Fox News. Are such comparisons valid?

Fox News is leaps and bounds ahead of Russian state TV, but their trajectory of cult-like adoration for President Trump is disturbingly familiar. Even pet opposition leaders on Russian state television are trained not to criticize Putin. He is usually mentioned only in glowing terms. On Fox News, you can still hear some criticism of Trump, although for the most part this is only for the purpose of ridiculing his critics. Fox News seems to be adopting the Russian model: discrediting any dissenting points of view as “fake news” and claiming everybody lies, while at the same time arguing that all is fair because there is a war against the leader, therefore there is no shame when you are caught misstating the facts or even outright lying.

Fox News is inching closer to the modus operandi of the Russian state media, which is essentially an echo chamber that celebrates the spectacular successes of their dear leader and eviscerates his real and perceived opponents. Fortunately, we are not there yet. As long as there are voices like Shepard Smith on Fox News, there is still hope.

How does Kremlin TV messaging tend to differ from the public face Russia presents to international audiences?

The disparity between the messages of the English-speaking Russian media and their domestic broadcasting is quite stark. English-speaking Russian state media outlets like RT and Sputnik attempt to blend in with their Western counterparts. Their language towards the US is condescending, but it is generally not openly adversarial. In contrast, domestic state media in Russia flagrantly expresses anti-American sentiments. This includes hoping for the downfall of our society, pining for the crash of the US dollar, waiting for another “Great Depression”, and openly plotting to undermine transatlantic unity and Western democracies all over the world. I am working to awaken American audiences to the realization that Putin’s Russia is not our friend and does not wish us well. The Kremlin’s domestic messaging to Russian audiences is very revealing in that sense.

The Russian media has played a central role in Putin’s Ukraine War, dedicating remarkable amounts of broadcast time to atrocity propaganda and negative reporting on Ukraine. How has this coverage evolved since 2014 and what - if anything - can this evolution tell us about the Kremlin’s future intentions in Ukraine?

Anti-Ukrainian propaganda tends to ebb and flow alongside Russia’s ongoing offensive. Coverage has evolved from a flood of fakes and demeaning insults targeting Ukraine as a nation, towards presenting Ukraine as a viable threat to Russia’s national security. The portrayal of Ukrainians as “Nazis” has been a constant feature throughout this steady stream of falsehoods. We are currently witnessing another feverish period of anti-Ukrainian propaganda. Putin will likely attempt to take advantage of the fact that the American establishment is distracted by the upcoming midterm elections, the Mueller investigation, and the daily circus of Trump’s Twitter feed. Meanwhile, Ukraine remains at the forefront of Putin’s revisionist ambitions.

Many observers see the 2014 attack on Ukraine as a watershed moment in the history of post-Soviet Russia media, leading to the more-or-less open weaponization of state-controlled platforms and the muzzling of Russia’s few remaining independent voices. To what extent does this represent a departure from the Kremlin’s approach to the media prior to 2014?

Margarita Simonyan, RT’s editor-in-chief, has compared the channel to a branch of Russia’s Defense Ministry. Meanwhile, Russian Foreign Ministry spokesperson Maria Zakharova has admitted that RT was created to wage infowars against the West. RT first rose to prominence following the 2008 war with Georgia, masquerading as an “alternative news” media outlet. It was essentially a sleeper tool, to be activated when needed. Following Ukraine’s 2013-14 Euromaidan Revolution, RT was unleashed as an overt weapon of state-controlled propaganda against former Soviet republics and democracies all over the world. It is vitally important to continue alerting worldwide audiences as to the true nature of this duplicitous tool that is being used by the Kremlin to create and widen divisions within our societies.

About the interviewee: Julia Davis is the founder of Russian Media Monitor and a featured expert in Russian Disinformation with the Atlantic Council’s Disinformation Portal