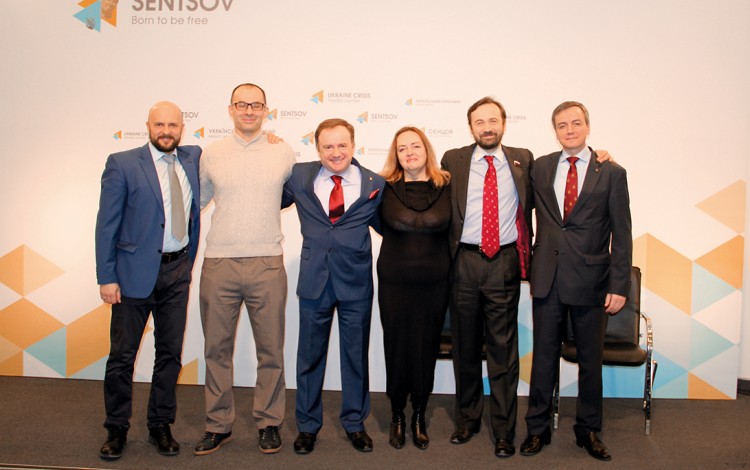 Olivier Vedrine does not come across as a typical revolutionary. The smartly dressed Frenchman has the kind of measured tones and scholarly style more readily associated with his background in academia and as a speaker for the European Commission. However, when the subject turns to Ukraine’s pro-democracy revolution and subsequent Russian military intervention, he is unable to conceal his emotional engagement. “The future of European values for the entire continent is at stake in Ukraine,” he says. “If Putin succeeds here, the political impact across the whole of Europe will be huge. It could mean the end of the European Union as we know it and the end of peace in Europe.”

Vedrine is currently best known to the Ukrainian public as the co-host of the weekly English-language TV talk show UA Tea Time, which airs on Ukraine’s national public broadcaster. He has also recently unveiled his latest initiative, the Continental European Union Club, which he hopes will serve as a platform in support of Ukraine’s Europeanization. Founding members of this informal club include a range of prominent Russians and Ukrainians such as former Ukrainian diplomat Oleksandr Khara and Russian State Duma member Ilya Ponomarev, who famously opposed the Kremlin annexation of Crimea in 2014. Vedrine sees the club as a way of supporting Ukraine’s democratic transition and believes it can also help to stimulate similar processes within Russia.

The Frenchman’s involvement in Ukraine’s geopolitical pivot is something of a departure from his original objectives in the country. Vedrine first came to Ukraine three years ago with the intention of setting up a business school. His plans changed rapidly in late 2013 when the Euromaidan protest movement erupted, captivating global audiences and initiating a chain of events that would lead to the fall of the Yanukovych government, the occupation of Crimea and the outbreak of a Russian hybrid war in eastern Ukraine. Vedrine says he felt compelled to become engaged in Ukraine’s struggle due to the common European values he recognized among the protesters and activists he encountered in Kyiv. “I am a pro-European activist so it was impossible for me to do nothing. These people were fighting for the same values I have always believed in.”

Vedrine has ancestral ties to both Russia and Ukraine and formerly taught a course on European institutions as a visiting professor at Lomonosov Moscow State University. His support for Ukraine has cost him many friends in Russia, but he says that even those who disagree with his politics have privately expressed their admiration for his principled position.

The loss of Russian friendships has been particularly painful for the Frenchman, who is adamant that he remains a passionate fan of the country and its culture. Despite his outspoken opposition to the Kremlin’s actions in Ukraine, Vedrine rejects accusations that he is a Russophobe, instead claiming to be a champion of European values across the entire continent – including Ukraine and Russia. “We need to return to the founding principles of the European Union – peace, prosperity, democracy and human rights. The only European country that currently refuses to play by these rules is Russia,” he says.

Vedrine believes real change will only become possible in Russia when the economic consequences of the Kremlin’s aggressive foreign policy finally force ordinary Russians to reconsider their core political beliefs. “The famed Russian love of strong leaders will end when their fridges are empty,” he predicts. “They will stop believing the propaganda when they have nothing to eat.”

This potential watershed moment is still far over the horizon. Despite the economic difficulties facing Russia, few observers are predicting an imminent collapse. Instead, Vedrine’s immediate priority remains support for Ukraine’s ambitious European integration efforts. He appreciates the sense of ‘Ukraine fatigue’ felt by many of his former EU colleagues over the slow pace of reform in the country, but argues for greater understanding of the enormous challenges Ukraine faces. “Now is not the time to give up. On the contrary, what we need now is more EU engagement. We are talking about the entire Soviet inheritance plus 20 wasted years of post-Soviet corruption. Is it realistic to expect a complete change in just two years?”

Russian past vs European future

Vedrine says he has no regrets about the unexpected path his life has taken over the past three years and argues that the stakes could hardly be higher. He is convinced the eventual outcome of Ukraine’s revolution will determine the fate of the entire region. If the country’s Europeanization and democratization efforts are successful, he believes the process will spread organically to Russia itself and to the rest of the former USSR. If Ukraine’s transformation fails, it could hamper democracy throughout the EU – especially in the formerly socialist EU member states of central and eastern Europe. “We must resist Russian revanchist efforts here in Kyiv otherwise they will spread beyond Ukraine’s borders and into the EU,” he says. “A successful Ukraine is the best way to defeat Putinism. Today’s Russia is stuck in the past. It is crucial for us to place the emphasis of the debate on the future.”