FINNISH AMBASSADOR: “Ukraine is still relatively unknown to many Finns” 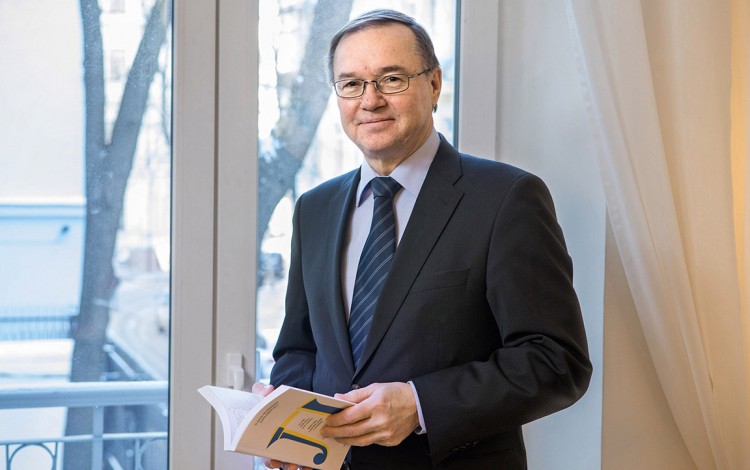 About the interviewee: Juha Virtanen is the Finnish Ambassador to Ukraine
Business Ukraine magazine

Finland celebrated a century of independence in December 2017. Like Ukraine, Finland sought to break free from Russian imperial rule one hundred years ago as Tsarist authority collapsed during the latter stages of WWI. Unlike Ukraine, the Finns succeeded. The subsequent twentieth century fates of the two countries could hardly have been more different. Finland would go on to become one of the most economically prosperous and socially advanced members of the European community, while Ukraine spent over seventy years trapped in Soviet isolation.

The fall of the USSR enabled Helsinki and Kyiv to renew a diplomatic relationship that dates all the way back to the tumultuous events of 1918. As Ukraine and Finland prepare to mark the centenary of diplomatic ties between the two countries, Business Ukraine magazine sat down with Finnish Ambassador to Ukraine Juha Virtanen to discuss strengthening bilateral business ties, hybrid war concerns, and Finland’s relaxed relationship towards the country’s imperial Russian inheritance.

What are the priorities for Finnish-Ukrainian relations in 2018?

In 2017, we had the great honor of celebrating the centenary of Finland’s independence here in Ukraine. In 2018, we will celebrate 100 years of diplomatic relations between our two countries. This historical achievement will give an added dimension to the work of the Embassy over the coming year. Maintaining frequent high-level political contacts will remain the basis and top priority of our bilateral relations. In the spirit of solidarity, Finland will also remain committed to supporting Ukraine in its reform process towards a modern European state and in consolidation of its sovereignty and territorial integrity.

Practical support will continue. Since 2014, we have assisted Ukraine with over EUR 32 million in aid. In 2018, we will also be busy with the launch of two new cooperation projects in the education and energy efficiency sectors. The promotion of trade and economic relations is always high among the priorities of the Embassy. We expect the bilateral economic commission to begin meeting again in 2018. There is huge potential to enhance bilateral economic cooperation and boost trade in a number of promising areas. I would also like to place a special emphasis on tourism exchange. More Finns should come to visit Ukraine and vice versa. If we want to make this happen, we need to increase promotion activities around our “VisitFinland” initiative.

How can Ukraine attract greater volumes of Finnish investment?

The total amount of Finnish investment in Ukraine today is close to EUR 100 million. Ukraine’s business and investment climate remains quite challenging and Finnish companies are closely following its development. Ukraine seems to be broadly on the right track. Achievements include a more stable macroeconomic situation, banking sector reforms, and deregulation of some administrative burdens. However, there are still quite a wide range of different obstacles and barriers in place. The list is familiar to everyone who takes an interest in the Ukrainian business climate and includes taxation, the predictability of legislation and its fair implementation, the judicial system, customs clearance and unnecessary bureaucracy.

Finland is an innovation-driven country and one of the most innovative economies in the world. I have noticed that today’s Ukraine is also showing signs of growing demand for innovative approaches in all spheres of life. I believe that in the coming years we will see increasing cooperation in this field, which bodes well for the development of broader bilateral business cooperation.

Energy-efficient and ecologically clean technologies have always played a key role in Finland’s economy. I am confident that Finland and Ukraine have a lot to share in these and many other sectors. The new Ukraine has the considerable advantage of being able to use our decades of experience together with its own untapped potential in order to boost the efficiency and attractiveness of the Ukrainian economy considerably.

What do you see the key opportunities for Ukrainian exporters looking to enter Finnish markets?

The main factor or facilitator here is Ukraine’s European choice. The DCFTA between the EU and Ukraine provides a solid legal and formal basis for Ukrainian exporters to modify their products and become more competitive in the European market. In addition, it is important to remember that we also have several bilateral agreements for facilitating business covering areas such as the protection of investments, avoidance of double taxation, and enhanced customs cooperation.

There is huge potential for trade, cooperation and joint ventures between Finland and Ukraine in a range of industrial sectors. So far, the exports of both countries tend to focus on traditional items where they enjoy comparative advantages. The majority of Ukrainian exports to Finland are concentrated in the agro, chemicals, metals and manufacturing sectors. Both countries should try to diversify their export portfolios to include more value added products and services. In the Ukrainian case, this could mean developing and refining bulk products and transforming the present offer to be more competitive in relation to other European suppliers.

I see three essential elements in this question. Firstly, confidence in the reliable production, distribution and quality of agricultural products is of the utmost importance to European consumers. Ukraine’s commitment to align itself with EU legislation and standards on all animal and plant health and food safety measures supports the competitiveness of Ukrainian products in this sector. Secondly, there must be active marketing of Ukrainian products in the Finnish market. Thirdly, Finland is a northern country whose own agricultural production is limited due to climate conditions. There is therefore important demand for some imported grains, vegetables and fruits. Increased supply of high quality Ukrainian agricultural products in Finland would be very welcome.

How is “Brand Ukraine” perceived in Finland and how have perceptions of the country evolved over the past few years of heightened media coverage?

Unfortunately, Ukraine and its history are still relatively unknown to many Finns. Traditionally, Ukraine is probably most closely associated in Finland with fertile soil and the supply of cereals. It also has a reputation for metal manufacturing and engineering, with Ukrainian companies such as Antonov enjoying considerable brand recognition. Meanwhile, sports and music-loving Finns know Ukraine as a two-time Eurovision Song Contest winner and the co-host of the Euro 2012 football championship. Andriy Shevchenko and the Klitschko brothers are household names. It is also common to see Ukraine’s impressive female biathlon stars featured on Finnish TV.

Inevitably, the Russian occupation of Crimea and the conflict in the Donbas have dominated Finnish perceptions of Ukraine since 2014, but this has also led to greater public interest and the emergence of a more complex picture. President Poroshenko’s January 2017 official visit to Finland in particular presented the media with the opportunity to add context and provide deeper insight into contemporary Ukrainian affairs. This trend is continuing. Numerous regional Finnish newspapers have recently published profiles of Ukrainian seasonal workers that have been broadly positive in tone while highlighting their contributions.

How has the war in Ukraine affected defense and security thinking within Finnish society?

In concrete terms, there was a slight increase in the number of people supporting Finnish NATO membership at the beginning of the conflict, but today this effect has virtually disappeared. Notwithstanding the conflict in Ukraine, Finland is well aware of and concerned by the many security threats in the world today. However, we do not feel directly threatened militarily. While we do take serious care of our national defense capabilities and see international defense cooperation playing a significant role, we do not base our security on military alliances. It is important for Finland to have the will and ability to defend itself and not to allow anyone to use its territory for hostile purposes against third countries.

In the context of the current Russian-Ukrainian confrontation, the notion of “hybrid threats” has become more visible. With this very much in mind, Finland recently established the European Centre of Excellence for Countering Hybrid Threats in Helsinki. This Centre will increase public and collective awareness of new security threats at both the national and international levels.

Finland has recently celebrated the 100th anniversary of the country’s independence from Russia. Nevertheless, visitors to Helsinki can still find monuments to Russian tsars and Lenin in the city, while some Russian street names also remain. How would you characterize Finland’s approach to the country’s Russian imperial past and what role does this aspect of Finnish history play in present-day relations with Russia?

In Finland, we prefer to consider history as a sequence of facts and tend to reject subjective interpretations of history that lead to different points of view at different times. We are not willing to use history for contemporary political purposes, but rather try to look at the past in a scientific and objective manner. Perhaps this explains the conservation of numerous Russian elements in some Finnish cities.

Finland’s status as a Grand Duchy of the Russian Empire during 1809-1917 was in many ways a preparatory phase towards future independence. In the 19th century, Finland was able to build its national identity based on Western values and institutions inherited from 600 years of Swedish rule. The cultural differences between Finland and Russia also made it easier to develop our own Finnish identity and national characteristics. The tsars themselves often enjoyed considerable prestige in Finland as the guarantors of Finland’s wide autonomy against the oppressive measures of the Russian authorities.

Today, Finland’s common history with Russia is evident in our shared interest in maintaining and visiting historical sites and monuments, especially in Helsinki and St. Petersburg, and in commemorating historical figures like Marshal Carl Mannerheim, who served in both countries.