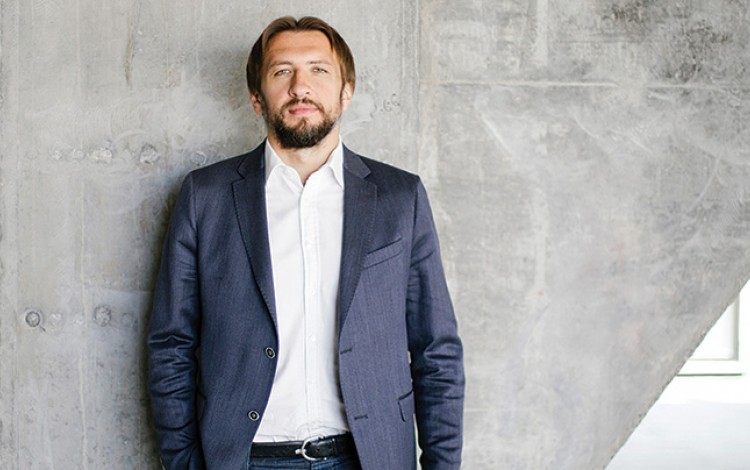 About the interviewee: Yuriy Kryvosheya is President and Managing Partner of PSJC Toronto-Kyiv, Co-founding Partner of Yakaboo e-commerce business, and member of the board at the Canada-Ukraine Chamber of Commerce
Business Ukraine magazine

As the President and Managing Partner of PSJC Toronto-Kyiv and board member of the Canada-Ukraine Chamber of Commerce, Yuriy Kryvosheya is very much involved in the growing bilateral business community as Canada and Ukraine look to build on the recent free trade breakthrough between the two countries. Meanwhile, the Toronto-Kyiv Complex he manages in central Kyiv serves as a business bridge between the two countries, providing a vantage point on strengthening bilateral ties reflected in the Canada and Toronto flags that enjoy pride of place alongside their Ukraine and Kyiv counterparts outside the complex. Kryvosheya explained to Business Ukraine magazine why he believes the advantages of expanding economic ties between Canada and Ukraine extend far beyond the immediate impact of additional investment dollars.

Since the summer 2016 signing of the Canada-Ukraine Free Trade Agreement (CUFTA), Kryvosheya has noted a significant upswing in bilateral interaction. There are now markedly more delegations and a growing range of promotional activities as companies on both sides seek to take advantage of the new opportunities presented by the free trade breakthrough. He identifies a number of reasons for optimism that go beyond the current double-digit expansion in trade, albeit from an admittedly low pre-CUFTA base. “Ever since independence, Canada has always led the way in terms of support for Ukraine. This support is now growing and is accompanied by greater business engagement,” he comments.

As the bilateral relationship moves to the next level, Kryvosheya believes the diaspora ties and familiarity that bind the two countries can play an important role in encouraging the kind of longer-term thinking that not all of the investors currently looking at Ukraine necessarily share. “One of the biggest advantages of this historic relationship is that Canadian investors tend to enter the Ukrainian market with a long-term perspective in mind. This gives Ukrainian partners the chance to plan strategically instead of focusing on short-term objectives. There is a sense that Canadian investors arriving today will still be here tomorrow.”

The other key advantage he identifies is reputational. Canada generally ranks among the world’s leading nations in surveys assessing compliance. In a world where international compliance expectations are currently on the rise, this makes Canadian companies demanding but desirable partners. “The trend in the international business environment is towards greater regulation and tougher compliance. Canada is well ahead of the curve,” says Kryvosheya. “This makes the reputational aspect of relations particularly important for Canadian investors, while creating challenges for potential Ukrainian partners who will have little choice but to adhere to compliance obligations themselves.” This means the strengthening relationship between the two countries will likely improve Ukraine’s business climate while enhancing its reputation among other international investors. Kryvosheya likens the process to the health benefits of a well-regimented gym workout regime. Canada, he notes with a smile, is an “excellent personal trainer”.

Now would certainly be a fortuitous time for Ukraine to receive a reputational boost from closer associations with Canadian compliance excellence. Ukraine’s star is already rising steadily if unspectacularly on international radars, but Kryvosheya argues that both the Ukrainian authorities and individual Ukrainian businesspeople could be doing much more to promote the country as an investment destination. A regular attendee of global investment events, he notes improving awareness of the country’s possibilities and talks of a thaw in attitudes, but also stresses the need to make Ukraine heard above the din of the crowded international marketplace. “A few years ago, it was common to encounter people who would tell me, “It’s an amazing project and we would love to work with you, but Ukraine.” Over the past eighteen months or so, this somewhat frustrating “but Ukraine” message has changed and we are now even seeing conservative investors take a more active interest.”

Kryvosheya points to a number of recent major deals involving Canadian institutional investors, arguing that they are clear indicators of an increasing international willingness to view Ukraine as a destination for strategic investment. This, he points out, will encourage other major financial groups to follow suit. Nevertheless, Kryvosheya cautions against assumptions that Ukraine’s merits will sell themselves. “We need to be better at communicating and much more proactive when it comes to promoting the country. Ukraine has a compelling investment narrative but it is not necessarily reaching international audiences. In this competitive environment, every reputable Ukrainian business figure needs to become an informal ambassador. If not out of patriotism, then out of necessity. International investors have a huge range of options open to them and need to hear compelling arguments explaining why Ukraine is a good choice. The process is similar to peeling a cabbage. Before you get to the core of any investment project, you first have to go layer by layer explaining the various macro aspects of the Ukrainian market.”

Kryvosheya argues that one of the best ways to promote Ukrainian investment is to entice as many business leaders as possible to the country in order to let them see for themselves. This belief in partially based on the enthusiastic reactions he regularly encounters among visiting Canadian delegations, and was emphatically reinforced during the May 2018 Champions League Final festivities in Kyiv. The Holiday Inn hotel within the Toronto-Kyiv Complex hosted large numbers of corporate guests attending the match, with many visiting Kyiv for the first time and expressing what Kryvosheya describes as “positive shock” at the dynamism and entrepreneurial vibe they encountered while in the Ukrainian capital.

Meanwhile, for the past two years the Toronto-Kyiv Complex has played host to Kyiv Art Week, attracting the participation of dozens of galleries from across Ukraine and various European capitals including Berlin, Warsaw and Copenhagen. Like the Champions League Final, this contemporary art event does not place the focus specifically on business but does attract executive-level audiences who might well go on to become investors in the country. “Many of the gallery owners confessed to me that they were initially skeptical about the value of coming to Ukraine,” says Kryvosheya. “However, they have all now added Kyiv to their annual calendars and are encouraging their peers to do likewise. Some even referred to Kyiv as “The New Berlin” and raved about the startup culture of the city.”

This focus on positive first impressions is a long way away from the kind of downbeat narratives more typically associated with Ukraine. Kryvosheya acknowledges that he has a more optimistic outlook than many, but makes no apologies for talking up Ukraine’s ability to attract international investment. “Not a single one of the many doomsday predictions for the Ukrainian economy since 2014 has actually come true,” he says. “There has been no collapse, no default. On the contrary, GDP growth figures and other key economic statistics have actually been better than expected. If the country has performed this well during a major crisis period, it does not take much imagination to see the possibilities going forward.”

He is equally dismissive of those who point to the relatively low levels of bilateral trade between Canada and Ukraine as evidence that the importance of the recent free trade agreement is exaggerated. “There will always be naysayers and so it’s no surprise to see critics underestimating the importance of cooperation with Canada. They fail to recognize the fundamental benefits it brings for Ukraine,” says Kryvosheya. “Despite the relatively low starting point in trade volumes, current growth trends send out a strong message, as does the support coming from both governments. What we are witnessing now is sustainable growth on solid foundations. Ukraine can be proud of having Canada as a strategic partner, and this partnership can only boost Ukraine’s own international reputation.”