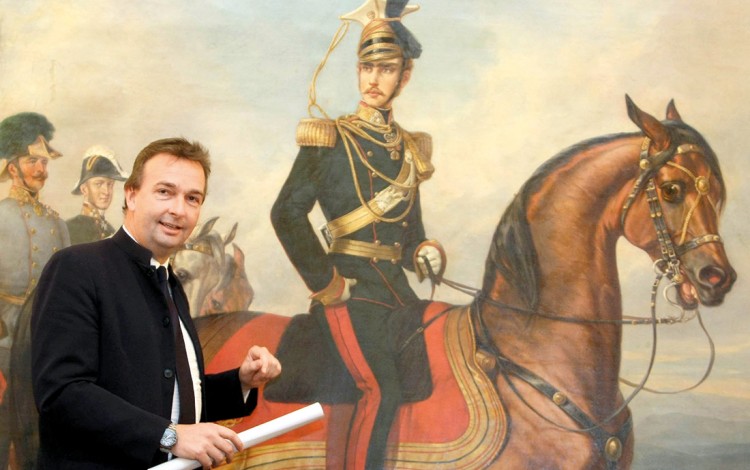 About the interviewee: Karl von Habsburg is the current head of the House of Habsburg and the oldest grandson of the last Habsburg Emperor Charles I
Business Ukraine magazine

Karl von Habsburg is the current head of the House of Habsburg and the oldest grandson of the last Habsburg Emperor, Charles I. Business Ukraine magazine asked him how his Habsburg heritage has influenced his understanding of contemporary Ukrainian nation-building efforts and why he thinks Ukraine’s Revolution of Dignity is such a significant event in modern European history.

The international media often views Ukraine through the prism of the country’s Soviet and Russian imperial past. To what extent do you think we can talk of contemporary Ukraine as a post-Habsburg as well as a post-Soviet society?

One of the Russian legends states that there is no Ukrainian nation and Austria created Ukraine in the final stages of WWI. It is a fact that (Habsburg Prince) Archduke Wilhelm was very pro-Ukrainian and supported the country wherever he could, but I would say that these claims are just Russian propaganda. Ukraine has a long European tradition stretching back to the Kyiv Rus, whereas the Russian Empire can be seen as the result of the Mongol Khanate. The Ukrainian state first emerged at the end of WWI and Austria supported it. The western parts of Ukraine were formerly part of the Habsburg Empire and influenced by the culture of this multi-national empire. Soviet influence might be still present in some structures in the modern Ukrainian political system, but the country is carrying out major reforms.

As the current head of the House of Habsburg, what kind of reception have you received in Ukraine and what are the most common questions you encounter from Ukrainians?

The reception in Ukraine has always been very friendly. Some people who know history ask about Archduke Wilhelm and other Habsburg family links to Ukraine, but the main conversation I have in Ukraine is about political reforms and the question of European integration.

Growing up in the House of Habsburg, what did you know of your family’s former domains in Ukraine?

History was one of the main themes of our education. It was very important for my father to teach us history, especially the history of our family in different parts in Europe. He was in contact with Wilhelm von Habsburg, so I know about him from the stories my father told us.

What role can Ukraine’s Habsburg heritage play in the country’s European integration?

I would say it is cultural heritage and a cultural link to Central Europe. History is always an important basis. In terms of Ukraine’s European integration, I see the Euromaidan movement and the Revolution of Dignity as the main elements.

During your travels in Ukraine, have you identified any discernable social or cultural differences between regions that were formerly part of the Habsburg Empire and the rest of the country?

Yes, of course one can still see the old border. You can also see these differences in other countries that were partly Habsburg and partly within other empires, for example in the Balkans. Mentalities of people do not change in a period as short as 100 years. However, these differences are not as strong as some people might have expected or hoped. Ukraine did not split in two when Russia started its aggression. People in the eastern part of the country are not interested in falling back into Russian rule. They know that they belong to a European tradition and not to the traditions of a Khanate.

As somebody with ancestral ties to Ukraine and experience of contemporary Ukraine, how would you describe the country to colleagues in Austria and elsewhere in the EU?

This is a question worthy of an entire book. What I try to explain is the different roots of Ukrainian and Russian tradition, to make clear that there is a difference and that the roots of Ukraine are definitely European. Kyiv had links to Central Europe when Moscow was still under the control of the Golden Horde. The second point is that the Ukraine of today is a country carrying out reforms, a country that has its own culture, language, and pro-European orientation. People educated before the end of the Cold War did not learn about Ukraine. We learned about Europe and the Soviet bloc. This makes for very intense discussions, as you can imagine.

Many people saw Ukraine’s 2013-14 Revolution of Dignity as an attempt to embrace European values. In a rapidly changing Europe, is it still relevant to speak of shared European values at all?

Yes, we have to speak about European values like personal dignity, personal liberty, and personal responsibility. We must talk about property rights, about family, the obligation to care for our friends and neighbors, about the rule of law, which is the first duty of the state. We have to talk about the principle of subsidiarity. The state must not behave in the paternalistic style of the Soviet era. People have their freedom and responsibility just as a family has its freedom and responsibility. Europe is based on these values. If we forget about them, Europe has no future. It will take some time, but the next generation will come to realize how important the Revolution of Dignity was for the development of Europe.