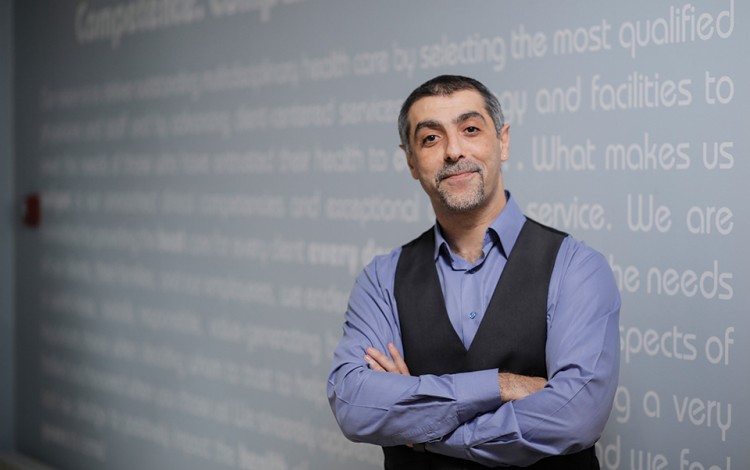 About the interviewee: Sam Aganov is the Founder and Chief Executive Officer of the Doctor Sam Medical Network
Business Ukraine magazine

Doctor Sam Founder and Chief Executive Officer Sam Aganov is no stranger to JCI accreditation procedures. Prior to launching this project in Ukraine in 2014, he spent most of his professional life in California as a healthcare executive. While working in the US, he had often been involved in the Joint Commission accreditation renewal process. This experience convinced him that securing JCI accreditation should be part of the Doctor Sam vision in Ukraine from the very beginning.

The Doctor Sam Medical Network began to take shape in the mid-2010s and currently features three clinics in Kyiv. Following initial clinic openings in 2015 and 2016, the focus turned towards making sure the network met JCI standards. “From the very start of the project, we knew that we were going to seek JCI accreditation and we wanted to do it for all three clinics at once,” says Aganov.

Securing JCI accreditation was a long-term undertaking that involved extensive preparations for the Doctor Sam team in order to meet rigorous international standards, which cover everything from adherence to internationally recognized policies and procedures to the legibility of doctors’ handwriting. Aganov says he initially spent considerable time working with staff individually in order to explain the rationale and philosophy behind the standards he was seeking to introduce. “At first it was an uphill battle but then it became fun,” he says. “The turning point was when my staff began to see how much better and safer their work would become by adopting these standards. It was also vital for them to appreciate the logic behind the standards in question and to understand how they came to be, otherwise there would be no guarantee that the practices we were introducing would stick.”

After rigorous preparations, the Doctor Sam team finally welcomed a JCI accreditation delegation in mid-August. JCI officials spent days inspecting all the Doctor Sam clinics in Kyiv as well as engaging with staff. Individual patient treatment histories and procedure compliance underwent detailed review. The process was thorough but transparent, says Aganov. It was also expensive, but he believes it was a price worth paying.  “There are cheaper internationally-recognized options available but JCI is the best. The expense shows that you are committed to quality. That was very important for us.”

In terms of both time and money, this investment has clearly paid off. While the JCI assessment process can last for up to ten days, the JCI headquarters in Chicago conferred accreditation on all three Doctor Sam clinics within hours of receiving the report from their field team in Kyiv. Aganov sees this as a victory for Ukrainian healthcare and vindication of the ambitious targets he set for the Doctor Sam Medical Network four years ago. “When we first started talking about the idea of seeking JCI accreditation, many people told us we were crazy,” he recalls. “Even the most optimistic said that while we might eventually be able to achieve JCI standards, it would take at least twenty years. They argued that Ukrainian medical staff were simply not used to the methodology, culture and philosophy involved. There was a belief that the country’s healthcare industry was not ready, but we have now demonstrated that it is entirely possible in Ukraine. As a result, I predict we will soon see more Ukrainian healthcare providers applying for JCI accreditation.”